Today, Even Snow Pants are Accused of Promoting Toxic Masculinity 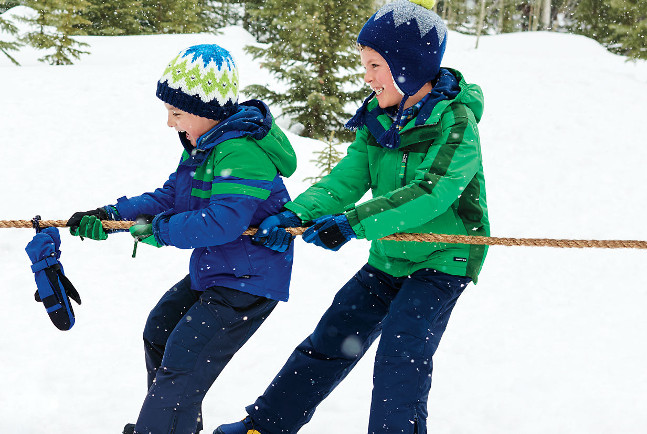 “If we are serious about tackling the toxic masculinity which persists in our culture, we must look at the images we market to our children.” That’s the message that mother Angela Nickerson sends to Lands’ End this season in an open letter she published on Medium.com. The company, which last year featured an extensive interview with Gloria Steinem in one of its catalogues, is now getting in trouble for not being progressive enough with its displays of clothing.

Nickerson is disappointed by the fact that Lands’ End is advertising coats and snow pants in different colors for boys and girls. “It shouldn’t surprise me,” she writes in a heavy-hearted post on Medium that has gone viral. “Your peers do it, too: bright, vibrant colors marketed for girls; black, brown, blue, green, and maybe red for boys. Why? Do you really think that boys only like primary colors and black or brown? They don’t. My son LOVES turquoise, apple green, red, and orange, for example.”

She says that until her son learned how to read—and saw that those colors were for girls—she could just buy him girls’ coats and snow pants. But now the jig is up. And instead of fostering her son’s love of all of the colors of the rainbow, Lands’ End is reinforcing harmful stereotypes. She is right, of course, that in pre-adolescent sizes, there is no difference between the boys’ and girls’ outerwear so they could simply advertise “kids’” snow pants. But I’m guessing that a company as big as Lands’ End has actually tested this and that girls like picking from the clothes on the girls’ page and boys like having their own dedicated section, too.

But Nickerson has another complaint: “Looking at your current graphic tees for kids, for example: I am glad to see three science-related shirts for girls! But where are the hedgehogs, foxes, or horses for boys? Are boys only interested in cars, dinosaurs—and only T Rex in aggressive stances—or space?”

We have been through this before. No doubt some of the reasons boys prefer certain images or like specific kinds of toys are natural and some of the reasons are the result of messages they hear and see. And there is no reason why, if marketed correctly, you wouldn’t see boys wearing shirts with foxes or horses. In fact, I’m pretty sure I’ve seen boys’ clothing with such animals on them.

But, as Nickerson suggests, it is easier these days to go the other way. Girls who are interested in traditional boy things are encouraged by their peers, parents and teachers—science is cool, math is cool, building things is cool. But most boys are not being encouraged to wear shirts with hearts, glitter or cuddly bunnies. Can we fix this with different messaging? Perhaps.

But the idea that pictures of roaring dinosaurs or outer space is encouraging “toxic masculinity” is nuts. In fact, the subtext of Nickerson’s complaint seems to be that anything specifically masculine is automatically toxic—either that, or she doesn’t really understand what “toxic masculinity” means to today’s social justice warriors. Is she suggesting that there is some correlation between boys who wear dinosaurs on their T-shirts or like to play with toy cars and the “rape culture?” Do images of aggressive dinosaurs encourage eight-year-olds to beat each other up?

If Nickerson’s message to her son is that such harmless images are harbingers of terrible behavior to come, one can only imagine what kind of effect this is having on him. All of which is to say that Nickerson is one cranky consumer that Lands’ End should probably just ignore.