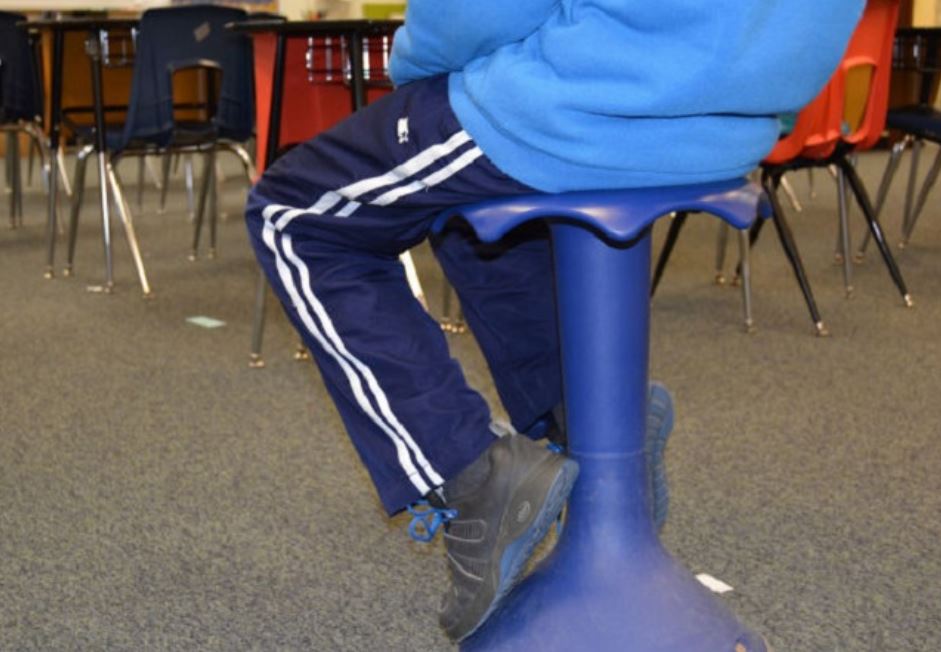 It isn’t easy being a kid these days: the school day has changed a great deal since the current generation of grade school kids’ parents were in school. With a greater emphasis on school work and testing, something in the school day had to disappear to make way for the focus on more academic pursuits like math, science and reading. For many American kids, art, music and recess are endangered parts of their day. What this means is more time trapped in desk chairs and less time moving around, fewer opportunities for open creativity and more rote memorization. It’s no wonder longtime teachers have noticed kids have a harder time sitting still now than ever before.

One solution suggested by a number of Dallas school teachers is unique: instead of sitting in traditional desks and chairs all day, many classrooms have replaced their students’ seating arrangements with “wobble” and “bouncy” chairs. The Dallas News reported on the new seats:

Some [students] gently bounce on stability balls. Others rock back and forth on plastic wobble chairs that move like spring animals on a playground. Some sit cross-legged on pillows around a low table. The rest lounge on their stomachs on plush bath mats.

It’s the comparison to the equipment on playgrounds that got me. In order to get students to pay attention and sit still for hours on end in a classroom, teachers had to replicate the experience of the playground. What might be a cheaper alternative to replacing chairs in a classroom, which costs between $600 and $2000 per class? More time on the actual playground.

Another Texas school, Eagle Mountain Elementary in Fort Worth, has given its students three times as many breaks, for three times as much time, as it used to. The Today Show reports on the response:

Some five months into the experiment, [first grade teacher Donna] McBride’s fears have been alleviated. Her students are less fidgety and more focused, she said. They listen more attentively, follow directions and try to solve problems on their own instead of coming to the teacher to fix everything. There are fewer discipline issues.

Parents are seeing them, too. Amy Longspaugh noticed her 6-year-old daughter Maribel, who is in McBride’s class, has become more independent and writes with more detail and creativity. Maribel has also made more friends as the kids mingle outside.

Who is most harmed by this expectation that students sitting still for an entire day doing bookwork? Boys. As Christina Hoff Sommers, a scholar at the American Enterprise Institute, argues, “Being a normal boy is a serious liability in today’s classrooms.” In a video for PragerU, Sommers lays out why it’s no longer possible for “boys to be boys.”

Boys and girls are made differently, and that difference extends past anatomy. We used to understand, for example, that boys do better if they have more time to move around during the school day. And yet today, we have taken away physical activities and expect boys and girls to behave similarly. When they don’t, boys are viewed as defective girls, who display the gold standard for behavior in classrooms.

The Dallas News, which interviewed a third grade teacher with bouncy chairs, Shannon Bowden-Veazey, reported, “A teacher for more than 20 years, she’s noticed kids have a harder time focusing than they did a decade ago. She blames it on a variety of factors such as technology and nutrition.”

In many ways childhood has changed for the worse in the last generation. Indeed, children are spending more time hooked on screens and eating more processed junk foods. If schools are noticing that their students are unable to focus while inside classrooms, though, we can’t exclusively attribute their school day behavior to factors related to their home lives.

Kids can’t sit in school all day long without a meaningful break because they aren’t supposed to. While adults can be reasonably expected to work a full day in an office, children are not miniature grownups. Kids, especially of the male variety, have the biological need to run, jump, play and explore; and research indicates the latter two are crucial to learning and the development of young minds.

While wiggle chairs and other movable seating arrangements are one way to help students get their “wiggles” out, they are merely a Band-Aid on a much larger problem. Students don’t need more time fidgeting in classrooms; they need more time outside playing and exploring. Childhood wasn’t meant to be lived indoors, watching through the windows at unused playground equipment outside. If kids can’t sit still, we should stop expecting them to.