Trial By Ordeal Was Actually an Effective Test of Guilt 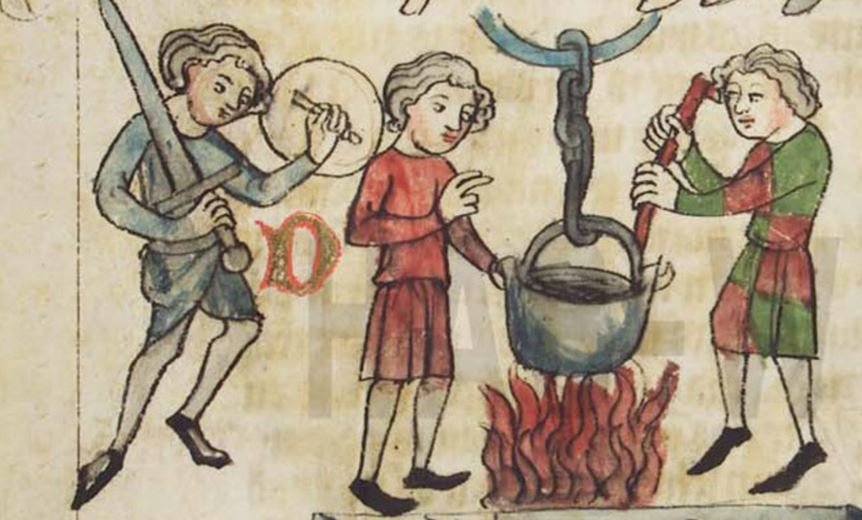 The quest for criminal justice is fraught with uncertainty. Did the defendant commit the crime, or is he a victim of incriminating circumstances? Is he guilty as charged, or has he been charged guilty by an overzealous prosecutor? Unsure about the truth, we often end up guessing ‘He did it’ when he might not have, or ‘He didn’t do it’ when in fact he did.

For more than 400 years, between the ninth and the early 13th centuries, that’s exactly what Europeans did. In difficult criminal cases, when ‘ordinary’ evidence was lacking, their legal systems asked God to inform them about defendants’ criminal status. The method of their request: judicial ordeals.

Judicial ordeals took several forms, from dunking the defendant in a pool of holy water to walking him barefoot across burning plowshares. Among the most popular, however, was the ordeal of boiling water and the ordeal of burning iron. In the former, the defendant plunged his hand into a cauldron of boiling water and fished out a ring. In the latter, he carried a piece of burning iron several paces. A few days later, the defendant’s hand was inspected: if it was burned, he was guilty; if not, he was innocent.

Judicial ordeals were administrated and adjudged by priests, in churches, as part of special masses. During such a mass, the priest requested God to reveal to the court the defendant’s guilt or innocence through the ordeal – letting boiling water or burning iron burn the defendant if he were guilty, performing a miracle that prevented the defendant’s hand from being burned if he were innocent. The idea that God would respond to a priest’s request in this way reflected a popular medieval belief according to which ordeals were iudiciua Dei – ‘judgments of God’.

Getting God to judge the guilt or innocence of criminal defendants is a pretty nifty trick if you could pull it off. But how could medieval European courts accomplish this?

Rather easily, it turns out. Suppose you’re a medieval European who’s been accused of stealing your neighbour’s cat. The court thinks you might have committed the theft, but it’s not sure, so it orders you to undergo the ordeal of boiling water. Like other medieval Europeans, you believe in iudicium Dei – that a priest, through the appropriate rituals, can call on God to reveal the truth by performing a miracle that prevents the water from burning you if you’re innocent, letting you burn if you’re not.

If you undergo the ordeal and God says you’re guilty, you have to pay a large fine. If He says you’re innocent, you’re cleared of the charge and pay nothing. Alternatively, you can avoid undergoing the ordeal by confessing to having stolen the cat, in which case you pay the fine, a bit reduced for having admitted your guilt.

What will you do?

Suppose you’re guilty: you know you stole your neighbour’s cat, and so does God. In this case, you expect that if you undergo the ordeal, God will let the boiling water burn you, evidencing your guilt. Thus, you’ll have to pay the large fine – and your hand will be boiled to rags to boot. In contrast, if you confess, you’ll save a bit of money, not to mention your hand. So, if you’re guilty, you’ll confess.

Now suppose you’re innocent: you know you didn’t steal your neighbour’s cat, and again so does God. In this case, you expect that if you undergo the ordeal, God will perform a miracle that prevents the boiling water from burning you, evidencing your innocence. Thus, you won’t have to pay any fine – and you’ll keep your hand intact. This is better than if you confess to stealing the cat, in which case you’d have to pay a fine for a theft you didn’t commit. So, if you’re innocent, you’ll undergo the ordeal.

Did you catch the trick? Because of your belief in iudicium Dei, the spectre of the ordeal leads you to choose one way if you’re guilty – confess – and another way if you’re innocent – undergo the ordeal – revealing the truth about your guilt or innocence to the court through the choice you make. By asking God to out you, the legal system incentivises you to out yourself. Pretty nifty indeed.

How could an ordeal-administering priest make boiling water innocuous to an innocent defendant’s flesh? By making sure that it wasn’t actually boiling.

The ‘instruction manuals’ for administering ordeals that medieval European priests followed provided them ample opportunity to do just that. The fire used to heat the water was prepared by the priest in private, permitting him to cool the fire. The priest ‘sprinkled’ holy water over the water in the ordeal cauldron, permitting him to cool the water. The ordeal cauldron was removed from the fire at a point during the mass, and the defendant wasn’t tested until the priest was done praying, allowing him to cool the water some more by drawing out his prayers. And ordeal observers were placed at a respectable distance from the ordeal ‘stage’, enabling the priest to carry out his manipulations undetected. Did I mention that it was the priest who adjudged the ordeal’s final outcome – whether the defendant’s hand had indeed been burned?

A ‘miraculous’ result was thus practically assured. For example, in the early 13th century, 208 defendants in Várad in Hungary underwent hot-iron ordeals. Amazingly, nearly two-thirds of defendants were unscathed by the ‘red-hot’ irons they carried and hence exonerated. If the priests who administered these ordeals understood how to heat iron, as they surely did, that leaves only two explanations for the ‘miraculous’ results: either God really did intervene to reveal the defendants’ innocence, or the priests made sure that the iron they carried wasn’t hot.

In practice, it might not have mattered whether ordeals were truly God’s judgments or instead the judgments of clever legal systems that leveraged criminal defendants’ incentives to correctly find fact. For, in either case, the result was the same: improved criminal justice, thanks to God.

Peter T Leeson is the Duncan Black professor of economics and law at George Mason University in Virginia. His award-winning book, The Invisible Hook: The Hidden Economics of Pirates (2009), uses economic reasoning to explain the infamous practices of the Caribbean pirates. His new book, WTF?! An Economic Tour of the Weird (2017), uses economic reasoning to find sense in the world’s most seemingly senseless social practices.