Move Over Obama, Trump Has a Pen, a Phone… and a Tweet 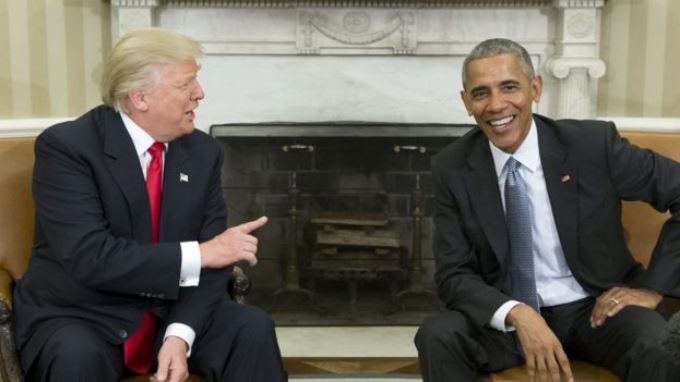 President Trump spent the weekend embroiled in yet another Twitter skirmish, this time with retiring Republican Senator Bob Corker. Trump may even have suffered a rare defeat on his own turf, based on Corker’s hilarious rejoinder about someone missing their daycare shift at the White House. If Trump has a soul, even he laughed at that one.

But many blame this kind of drama as a major contributing reason to Trump “not getting anything done” so far during the first year of his presidency. Even those on the blood-in-their-eyes, Trump-hating left make this criticism. One would think they’d be glad he’s not getting anything done, but apparently, a government not doing anything is even worse for them than one doing things they don’t like.

If only “not getting anything done” were true. The Pentagon goes on waging war, uninterrupted by elections, supposed gridlock, or even “government shutdowns.” War has become the normal state, with “an act of Congress” required to stop it, rather than start it.

Domestically, all of Washington’s unconstitutional regulatory agencies have hummed along without pause. The FDA is still driving up prescription drug prices by keeping thousands of generics off the market. The TSA is still violating the 4th Amendment millions of times per day while virtually never discovering dangerous items brought on board, even during their own tests. And the Social Security Administration goes on cutting checks as if it didn’t have tens of trillions in unfunded liabilities.

But none of this is enough, neither for Trump’s supporters nor his critics. In modern American political parlance, a president isn’t a success unless he or she martials some new government program through Congress. To simply “take care that the laws are faithfully executed” is no longer considered the length and breadth of the president’s duties.

Sadly, the American public has largely bought into this progressive mindset. Ask any of your friends if a presidency is going well and you are virtually assured of getting an answer consistent with the view that success is measured by what new mischief the president has convinced Congress to authorize. Politicians frequently stump on “getting the work of the American people done” to thunderous applause.

And when Congress doesn’t bend to the will of the president, there seems to be tremendous support on both the right and the left, when one of their own is in the Oval Office, to simply ignore Congress’ legislative authority and begin legislating by executive order. Yes, there is some token opposition from the party out of power, but ask yourself how many times you’ve heard friends say something to the effect of, “Well, if Congress isn’t going to get it done, then…”

Congress purportedly tried to repeal Obamacare three times and failed. And let’s be frank, they didn’t really try to repeal it, which would have required one sentence: “The Patient Protection and Affordable Care Act is hereby repealed.” They tried to adjust some of the knobs on the imploding machine and call it something else.

But they couldn’t get the votes, and now Trump is promising to use the “power of the pen” to do what Congress has failed to do. And none of the Republicans who screamed bloody murder at Obama’s “pen and phone” statement is anywhere to be found.

Ironically, Trump’s usurpation may exercise the power delegated in the Commerce Clause as it was intended for the first time in decades. The reason Congress was given power to regulate interstate commerce was to ensure freer trade between the states, some of which were erecting tariffs under the Articles of Confederation. But Trump’s order would be unconstitutional nevertheless. The very first words of Article I make that clear.

Consent and the Constitution

It’s important to remember what the word “unconstitutional” means. It’s not some academic concept with no bearing on the real world. Unconstitutional means exercising a power nobody ever consented to grant. Elections don’t grant new powers to the federal government or any of its branches; they only decide who will exercise existing powers. Only an amendment to the Constitution can grant a new power. And it’s hard to amend the Constitution, on purpose.

No one has ever consented to the president having power to do what Congress fails to do legislatively, even when it fails to repeal a bad law. And there is a word for an executive who exercises power without consent of the governed. It starts with a “T.”

These aren’t minor details. They are the basics of what is supposed to make the United States such a wonderfully different country than any other in history. The Constitution’s delegation of specific powers and separation of those powers among different branches supposedly ensures that US citizens are never ruled by anyone’s arbitrary will, but only by laws they have consented to.

Personally, my view of the Constitution isn’t substantively different from Lysander Spooner’s and of government in general, Murray Rothbard’s. But if my fellow citizens won’t respect my natural rights to that extent, is it too much to ask that they follow their own rules?