Why We’re Stressed Out 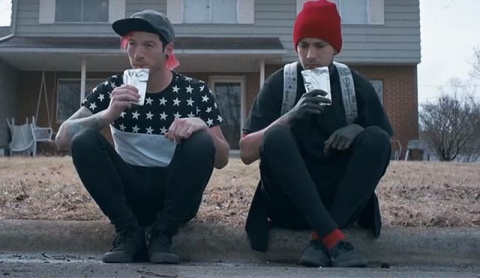 My oldest son, a freshman in high school, informed me that the guys from Twenty One Pilots have become the pinnacle heartthrobs for teen girls. I had no idea. Even more fascinating than that tidbit, is the fact that their official music video for “Stressed Out” has been viewed over 1 billion times on YouTube.

Heartthrobs or not, I have no doubt that the real reason for their popularity is how deeply their lyrics have struck a chord with most of us.

We used to play pretend, give each other different names,
We would build a rocket ship and then we’d fly it far away,
Used to dream of outer space but now they’re laughing at our face,
Saying, ‘Wake up, you need to make money.’”

As Aristotle so wisely argued, man is a social creature. Yet, in the modern world we seem to be more isolated than ever — despite the best efforts of social networks. Even if you have family or friends, most of us have the sense, right or wrong, that it is “me against the world”.

Not only has the last half-century seen the disintegration of community, neighborhood, civic organizations, fraternal orders, and mutual aid societies, it has also seen the rapid decline of the two institutions that have been at the core of providing meaning and security to most human societies: Family and religion.

How much things have changed can probably be sensed by how you react to the idea that family and religion would be a person’s core supports and providers of security. So often, our culture portrays family as a burden, something to tolerate and then leave. Yet, study after study details the role strong families, especially with strong fathers at the head, play in fostering a deep sense of security for people as they grow through life. If the nest of home doesn’t provide security, what will?

And as for religion, it has been thoroughly hollowed out. In the West for most of the last 2,000 years, Christianity was the religion that helped people see meaning in life. It gave them a sense of hope that no matter what fears they faced, that this temporal life was a short one and that God himself not only cared about them, but offered each person a place of eternal security in the next life. Men of the West once saw life not as surviving six days a week and then spending an hour in church on a Sunday, but rather life as lived out belief. Once, long ago, Christianity was interwoven through everything a person went through and the society he resided in.

Unmoored from both past and purpose, cleaved from the land, with barely existent social support systems, we are forced to find our way through a chaotic world with little to fall back upon. Buffeted this way and that by an economy dominated by faceless, multi-national corporations, a government unresponsive to its people, a media hell-bent on keeping us perpetually scared to keep ratings up, an education system that seems to care less about readying us for life and more about the money a student represents, and an entertainment culture that tells us to chase the pleasures of the moment as there is no other meaning to life, most of us feel overwhelmed.

Modern life is exceedingly stressful. It should be no surprise that we’re stressed out, desperate for an escape that we cannot find. In short, the material prosperity that we were told would provide us with everything we need has become unbearably heavy precisely because it is not everything we need.

There is no going back to an idealized past arrangement of society. No, we must confront our spiritual poverty, weighing it against our material prosperity, with an eye to the future. What does a healthy balance look like? We will need to find ways to baptize our modern, technological society to make it serve the whole human being, not just the material side. It won’t be easy.