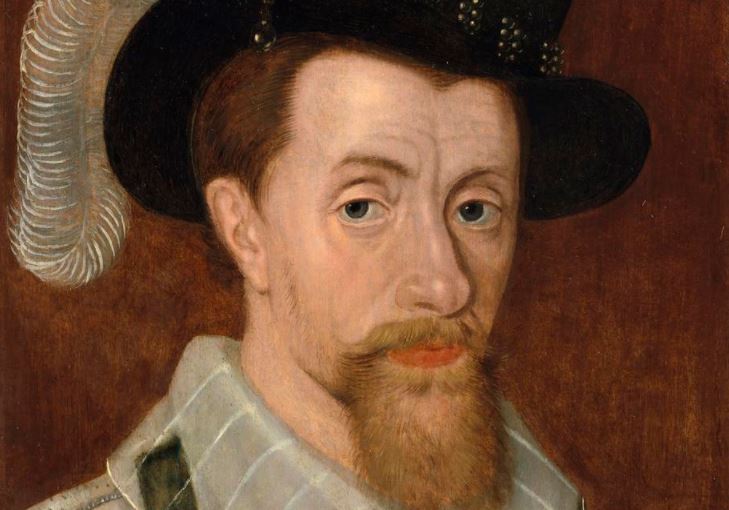 The Jacobean playwright Thomas Middleton invented the concept of ‘white people’ on 29 October 1613, the date that his play The Triumphs of Truth was first performed. The phrase was first uttered by the character of an African king who looks out upon an English audience and declares: ‘I see amazement set upon the faces/Of these white people, wond’rings and strange gazes.’ As far as I, and others, have been able to tell, Middleton’s play is the earliest printed example of a European author referring to fellow Europeans as ‘white people’.

A year later, the English commoner John Rolfe of Jamestown in Virginia took as his bride an Algonquin princess named Matoaka, whom we call Pocahontas. The literary critic Christopher Hodgkins reports that King James I (depicted above) was ‘at first perturbed when he learned of the marriage’. But this was not out of fear of miscegenation: James’s reluctance, Hodgkins explained, was because ‘Rolfe, a commoner, had without his sovereign’s permission wed the daughter of a foreign prince.’ King James was not worried about the pollution of Rolfe’s line; he was worried about the pollution of Matoaka’s.

Both examples might seem surprising to contemporary readers, but they serve to prove the historian Nell Irvin Painter’s reminder in The History of White People (2010) that ‘race is an idea, not a fact’. Middleton alone didn’t invent the idea of whiteness, but the fact that anyone could definitely be the author of such a phrase, one that seems so obvious from a modern perspective, underscores Painter’s point. By examining how and when racial concepts became hardened, we can see how historically conditional these concepts are. There’s nothing essential about them. As the literature scholar Roxann Wheeler reminds us in The Complexion of Race (2000), there was ‘an earlier moment in which biological racism… [was] not inevitable’. Since Europeans didn’t always think of themselves as ‘white’, there is good reason to think that race is socially constructed, indeed arbitrary. If the idea of ‘white people’ (and thus every other ‘race’ as well) has a history – and a short one at that – then the concept itself is based less on any kind of biological reality than it is in the variable contingencies of social construction.

There are plenty of ways that one can categorise humanity, and using colour is merely a relatively recent one. In the past, criteria other than complexion were used, including religion, etiquette, even clothing. For example, American Indians were often compared with the ancient Britons by the colonisers, who were descendants of the Britons. The comparison was not so much physical as it was cultural, a distinction that allowed for a racial fluidity. Yet by the time Middleton was writing, the colour line was already beginning to harden, and our contemporary, if arbitrary, manner of categorising races began to emerge.

The scholar Kim Hall explains in Things of Darkness (1996) that whiteness ‘truly exists only when posed next to blackness’: so the concept of ‘white people’ emerged only after constructions of ‘blackness’. As binary oppositions, ‘whiteness’ first needed ‘blackness’ to make any sense. The two words create each other. The scholar Virginia Mason Vaughan writes in Performing Blackness on English Stages, 1500-1800 (2005) that: ‘Blackfaced characters in early modern dramas are often used … to make whiteness visible.’ ‘Black’ and ‘white’ have never referred to defined groups of people; they are abstract formulations, which still have had very real effects on actual people.

There is little verisimilitude in describing anyone with either term, which explains their malleability over the centuries. How arbitrary is it to categorise Sicilians and Swedes as being ‘white’, or the Igbo and Maasai as both ‘black’? This kind of racial thinking developed as the direct result of the slave trade. Hall explains: ‘Whiteness is not only constructed by but dependent on an involvement with Africans that is the inevitable product of England’s ongoing colonial expansion.’ As such, when early modern Europeans begin to think of themselves as ‘white people’ they are not claiming anything about being English, or Christian, but rather they are making comments about their self-perceived superiority, making it easier to justify the obviously immoral trade and ownership of humans.

Hall explains that the ‘significance of blackness as a troping of race far exceeds the actual presence’ of Africans within England at the time. Before Middleton’s play, there were a host of imagined ‘black’ characters, such as in Ben Jonson’s The Masque of Blackness (1605), which featured Queen Anne performing in blackface, as well as Shakespeare’s ‘noble Moor’ in Othello, staged a couple of years before Middleton’s play. Understandings of race were malleable: in early modern writing, exoticised characters can be described as ‘dusky’, ‘dun’, ‘dark’, ‘sable’ or ‘black.’ Depictions of an exoticised Other weren’t only of Africans, but also Italians, Spaniards, Arabs, Indians, and even the Irish. Middleton’s play indicates the coalescing of another racial pole in contrast to blackness, and that’s whiteness – but which groups belonged to which pole was often in flux.

Consider the Dark Lady of Shakespeare’s sonnets. In sonnet 130, he says of his mysterious paramour that ‘her breasts are dun’; in sonnet 12, he references her ‘sable curls’; and in sonnet 127 he writes that ‘black wires grow on her head’. As is commonly understood, and taught, Shakespeare subverted the tradition exemplified by poets such as Petrarch who conceptualised feminine beauty in terms of fairness. Part of this subversion lay in pronouncements such as the one that states that black is ‘beauty’s successive heir’, a contention of Shakespeare’s that can seem all the more progressive when our contemporary racial connotation of the word is considered. Thus, how much more radical is his argument in sonnet 132, that ‘beauty herself is black/And all they foul that thy complexion lack’. Shakespeare’s racialised language connoted a range of possibilities as to how the Dark Lady’s background could have been imagined, and the conjecture that she was based on women variously European or African indicates this racial flux in the period.

Or take Caliban, the native of the enchanted isle colonised by Prospero in The Tempest. Often sympathetically staged in modern productions as either an enslaved African or an American Indian, there are compelling reasons to think that many in a Jacobean audience would rather understand Caliban as being more akin to the first targets of English colonialism, the Irish. By this criterion, Caliban is part of the prehistory of ‘how the Irish became white’, as the historian Noel Ignatiev put it in 1995. None of this is to say that Caliban is actually any of these particular identities, nor that the Dark Lady should literally be identified as belonging to any specific group either, rather that both examples provide a window on the earliest period when our current racial categorisations began to take shape, while still being divergent enough from how our racialised system would ultimately develop.

Yet our particular criteria concerning how we think about race did develop, and it did so in service to colonialism and capitalism (and their handmaiden: slavery). Bolstered by a positivist language, the idea of race became so normalised that eventually the claim that anyone would have coined such an obvious phrase as ‘white people’ would begin to sound strange. But invented it was. With the reemergence today of openly racist political rhetoric, often using disingenuously sophisticated terminology, it’s crucial to remember what exactly it means to say that race isn’t real, and why the claims of racists aren’t just immoral, but also inaccurate. Middleton demonstrates how mercurial race actually is; there was a time not that long ago when white people weren’t ‘white’, and black people weren’t ‘black’. His audience was just beginning to divide the world into white and not, and, unfortunately, we remain members of that audience.

Race might not be real, but racism very much is. Idols have a way of affecting our lives, even if the gods they represent are illusory. In contemplating Middleton’s play, we can gesture towards a world where once again such a phrase as ‘white people’ won’t make any sense. In realising that humans were not always categorised by complexion, we can imagine a future where we are no longer classified in such a way, and no longer divided as a result of it either.