Using the National Anthem and U.S. Flag to Protest is Not Helpful 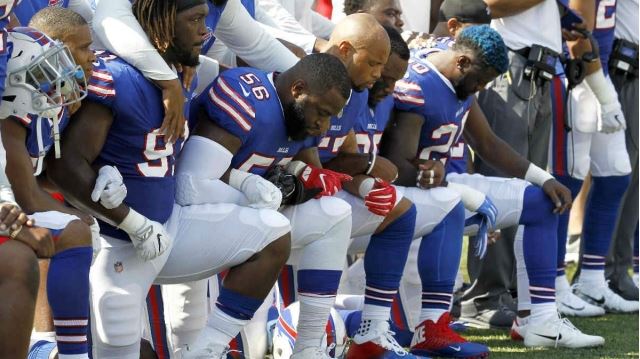 How this all started and how it escalated is less important than the weekend blowup that engulfed America, when average folks count on taking a break from tensions of the week at work and in the news and enjoy the diversion of sports events. Now it’s all blurring together and social tensions have invaded the sporting arena.

Sports have become more political for a long while now, but this is that on steroids (which is another story altogether).

The case of Donald Trump vs. the players of the National Football League is emblematic of our political moment: At its heart is a very serious issue, but that issue is wrapped in so many layers of celebrity, stupidity, opportunism, social-media hysteria, and crassness that it is nearly forgotten.

What is that issue? It’s embedded in the Pledge of Allegiance, a pledge to “one nation, under God, indivisible, with liberty and justice for all”. And in the National Anthem, focusing on the Star Spangled Banner waving “O’er the land of the free…”

One very serious issue is how indivisible we really are, and how we use the freedom we have. But overarching that two-part concern is the thick-as-blood honor we pay to those who have fought for generations, paid a great price or the ultimate sacrifice, to preserve the rights and freedoms of the United States. And the flag and National Anthem represent that. The flag drapes the coffins of Members of the Military Services killed in action; it flies at half-staff in memory of those who gave their lives in service; it famously was captured in an iconic photo as it was being raised at Iwo Jima by six Marines in World War II. Which turned into the Marine Corps War Memorial in Washington DC.

Most Americans probably don’t know how the National Anthem even came to be the opening of major sporting events. In fact, as a Chicagoan, I didn’t even know the Chicago Cubs were part of that history. It’s edifying to see a nation united in that respect for its shared history, rough as some of it had been. Rough as it is now.

So is it the flag athletes are disputing or is it the anthem? Neither. But they’re using that ceremony at the start of major sporting events to protest other grievances and injustices, and that has all of a sudden become a national big deal. Because President Trump posted some jabbing tweets that baited both his opponents and his base into reactionary behavior that would play to visceral emotions already deeply felt. Alas,

This fad may have petered out naturally after a few more months; Trump’s all but guaranteed that we’ll get it through the 2020 election.

After the weekend of “national anthem protests” across the nation and the National Football League, everyone was wondering how the nationally beloved Monday Night Football game would handle it. It was pretty amazing to see, when it played out. Just before the National Anthem, a gigantic American flag was unfurled from one side of the football field to the other, covering the whole playing field. Kind of hard to protest that. And the players and owners didn’t want to, after all.

“I made my mind up on this issue,” (Dallas Cowboys Owner and General Manager) Jerry Jones said…”that I wasn’t going to comment other than I am very proud of the fact that the Dallas Cowboys and our players have always stood for the flag and the recognition for the flag always. What is important is to figure out that to show the kind of respect and the perception of respect. How can (the team) in front of a national audience show unity and a statement of equality. (The team) wanted to do that. It evolved throughout the organization, particularly over the last two days, and it was executed.

“I can’t say enough about the understanding and the awareness of our team and these young men, if you will, that basically said, ‘You know, that makes sense.’ There’s no need for us to talk about unity and equality and have 60 percent of this country mad at you because you’re not being perceived as honoring the flag. And this was a way to do both.”

Of course football players and other professional athletes should stand for the national anthem. Not, as the critics so often put it, because America has been good to them, but because America is good. That the American way of life generates so much prosperity that young men can grow vastly wealthy playing a children’s game is not the least of the nation’s virtues, but it is not the most important of them, either. The United States of America has been, and continues to be, a force for liberty, decency, justice, peace, and prosperity both within its own borders and around the world. “The Star-Spangled Banner” may be an infamously difficult song to sing, but the sight of the flag it celebrates has meant liberation — and life itself — to millions of people around the world, from those looking through the fence at Buchenwald to those looking over the railing of a ship at Ellis Island. That is why you stand for the national anthem…

We have no doubt that most of those kneeling in protest during the singing of the national anthem are sincere in their concerns, and that they mean to use their high-profile positions in the service of the public good as they perceive it. Goodness knows professional athletes have been in the news for worse reasons. But making a spectacle of themselves during the national anthem disrupts an all too rare moment of civic comity, a time to meditate on our blessings rather than our grievances. There are a dozen different ways athletes and other celebrities might be of good service and bring attention to the issue at the center of this controversy…Of course athletes have the right to protest. Their employers also have the right to set standards of professional conduct, and football fans have the right to change the channel. The president has the right to tweet. This is not a question of rights but a question of judgment, which was, unhappily, in short supply over the weekend.

Let’s get back to the business at hand. The president needs to work on national issues and geopolitical affairs and North Korea especially. Celebrity athletes need to play sports to the best of their abilities. And the rest of us have our assorted family and work obligations to fulfill, and community and charitable needs to address, especially in the ongoing need for relief in disaster struck areas hit by back to back hurricanes and earthquakes.

It’s humbling – or should be – that for people who survived such devastation, who are subsisting on absolute basics, having lost most of what they had with little to sustain them until substantial relief arrives and relief workers help to rebuild their lives, homes and communities, the American flag on the arm patch of the Coast Guard or Army Corps of Engineers, on the helicopters and trucks delivering supplies and flagpoles left standing after the storms, represents hope. It’s up to the American people to deliver on that.

Sheila Liaugminas writes from Chicago. She is a journalist, author and host of A Closer Look on Relevant Radio. This MercatorNet article was republished with permission.