The Thucydides Quote in ‘Wonder Woman’: Is it Legit? 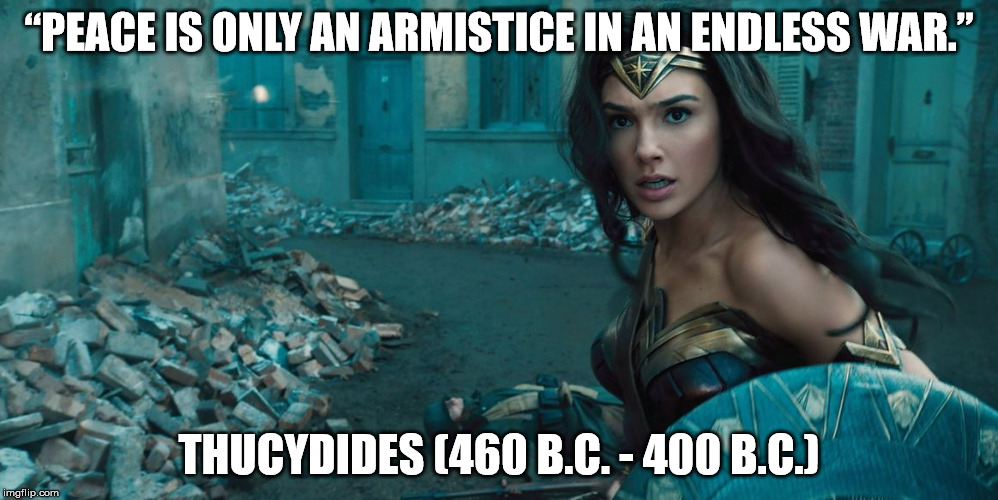 As readers know, I saw Wonder Woman with my children earlier this year. It’s a great movie—we’ve already purchased it on Apple TV—but something has been gnawing at me for a while.

At one point in the movie, Gen. Ludendorff offers a rather dark take on human nature.

“Peace is only an armistice in an endless war,” the villain sneers.

The quote seemed quite familiar to me. I had read History of the Peloponnesian War many years before and still own a copy. So after watching the movie, I spent an hour or so thumbing through Thucydides’ famous work. Alas, I turned up nothing.

Fortunately, there is this great invention that offers answers to pretty much any question one can think of—it’s called Google. It helped me find a 2015 blog post from Neville Morley, Professor of Classics and Ancient History at the University of Exeter in the United Kingdom, which addresses the quote in question. Here’s what Morley had to say

“It’s the usual problem with Thucydides quotes: it looks perfectly plausible, with just the right tone of rational scepticism and cynicism, and it expressed an idea which certainly is found in Thucydides’ discussion of the peace of Nicias and his idea that the thirty years of the Peloponnesian Wars should be treated as a single whole rather than as several separate conflicts (which, as I note, was an idea that Raymond Aron then applied to the period 1914-45). The problem is that I can’t find any trace of this precise quotation in any translation of Thucydides – and, interestingly, it doesn’t appear in any of the books of quotations, even military quotations, that I studied for my Arion article on the subject a couple of years ago, which is why I haven’t researched it before. It now seems to be quite widespread on the internet and in certain publications, but this is quite a recent development. The earliest definite attribution to Thucydides that I’ve found so far is actually in the ‘History of Warfare’ gallery in the West Point Museum, which includes quotations painted on the walls that were, so I am informed, supplied by members of the History Department in 1988 when the gallery was refurbished.”

Though there is little indication that Thucydides uttered the words in question, the quote bears a striking resemblance to a pair of actual quotations from other historical figures.

Plato recorded this quote in Laws, which he attributes to Clinias of Scambonidae:

“For (as he would say) ‘peace,’ as the term is commonly employed, is nothing more than a name, the truth being that every State is, by a law of nature, engaged perpetually in an informal war with every other State.” (H/T: Jake Nabel)

In a similar vein, Napoleon Bonaparte is said to have uttered the following at the (brief) Peace of Amiens:

“In the present state of affairs every peace treaty means no more than a brief armistice; and I believe that my destiny will be to fight almost continuously…”

So why are there so many people attributing this quote to Thucydides if he didn’t say it?

I have a theory. When I said the quote sounded familiar, I wasn’t lying. I believe the quote, if I’m not mistaken, was featured in the video game Call of Duty: Modern Warfare 2. If memory serves, whenever a character was killed a quote about war was flashed on the screen, and one of the quotes featured was the one Diana attributes to Thucydides (attributed to the same source).

If the quote was featured in the game and was attributed to Thucydides, it would help explain how it became so widespread that it eventually found its way into a Hollywood blockbuster.