Socialism is Not ‘Public Roads’ and ‘911 Service’ 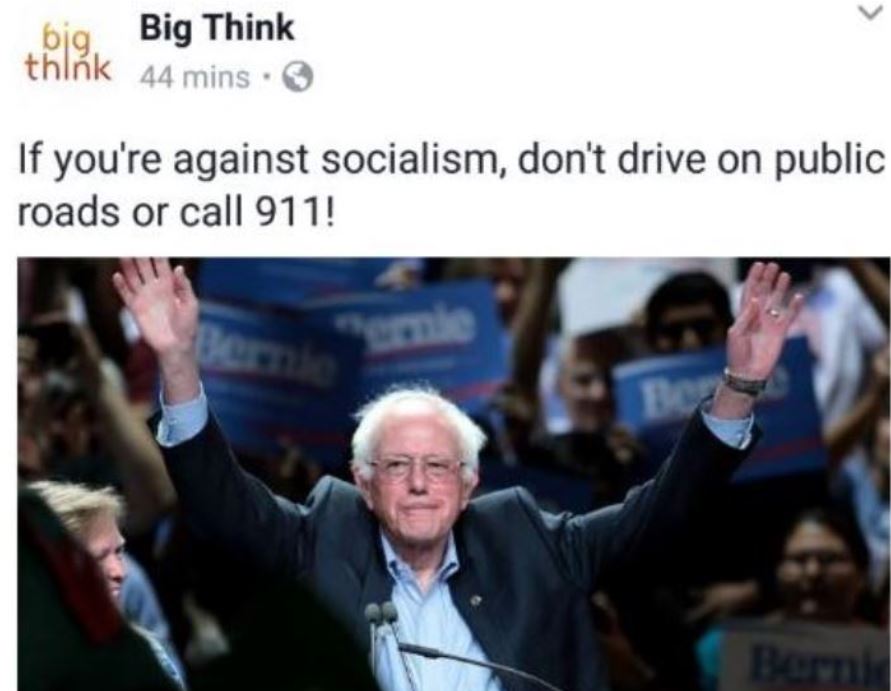 Evidence suggests that socialism is becoming more popular in the United States. Yet there is reason to believe this is at least partly because Americans are pretty much clueless as to what socialism is. It’s been shown time and again that many people who say they love socialism cannot accurately describe its basic tenets if their life depended on it.

Man on the street videos depicting students are one thing, one could say. Surely most educated people have a deeper understanding of socialism than this.

Don’t be too sure. A case in point can be found at Big Think, a publication whose videos and short articles I often enjoy. An article detailing the recent surge in the popularity of socialism was teed up this way by the brand’s social media editor: If you’re against socialism, don’t drive on public roads or call 911!

The comment, which was liked more than 2,500 times, demonstrates either an appalling ignorance or a blatant disdain for truth and accuracy.

Fact: In 1806, more than a decade before Karl Marx was born, the United States Congress passed, and President Thomas Jefferson signed, legislation authorizing construction of the Cumberland Road, an interstate highway that would stretch more than 600 miles, connecting the Potomac and Ohio Rivers.

But we shouldn’t stop there. Nearly two thousand years before Marx and his collaborator Friedrich Engels penned The Communist Manifesto, Rome had established what many historians consider the grandest engineering achievement of the ancient world: a system of stone-paved highways that snaked across more than 100 provinces, stretching some 250,000 miles. These highways were funded almost entirely with public funds. (Exceptions were made when rich senators offered to pony up denarii on projects so they’d have their names attached to roads.)

A publication that calls itself “Big Think” should not be conflating government spending with socialism. It displays either ignorance, lazy thinking, or wanton dishonesty. What’s ironic is that the writer of the Big Think article, Paul Ratner, actually attempts to make this distinction himself, citing a description of socialism from Jacobin, a socialist magazine:

“In their guide, the writers and editors of Jacobin also try to dispel some of the confusion related to socialism. In particular, they argue, many people tend to associate any kind of government institution, even the DMV, with socialism. But just because it’s a part of the government doesn’t make it socialist.”

Now, all of this is so obvious I hesitated to even write about it. It’s possible the Facebook comment was written by some poor unpaid intern who has not yet taken a political theory class. But let’s be honest: that’s probably not the case.

Most of us have heard banal quips of this variety too many times from educated people to assume that only uneducated rubes could mistake basic government functions and services with socialism, an ideology that involves “abolishing private ownership of the things we all need and use — factories, banks, offices, natural resources, utilities, communication and transportation infrastructure — and replacing it with social ownership, thereby undercutting the power of elites to hoard wealth and power.”

So please, once and for all: can we retire the tired fallacy that government services and socialism are one and the same? They’re not.