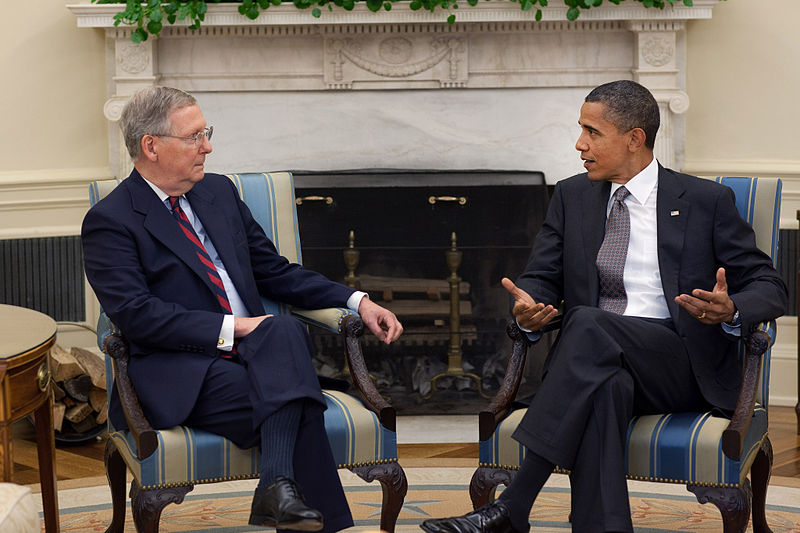 Thousands of members of Congress and congressional staffers are benefiting from an illegal scheme that gives Congress special treatment both by exempting them from the harshest part of ObamaCare and by providing them each up to $12,000 in benefits that federal law prohibits them from receiving. Last week, the Heritage Foundation’s John Malcolm and I furnished additional evidence that the government officials who implemented this scheme violated federal criminal laws. (Malcolm is a former deputy assistant attorney general in the Department of Justice’s Criminal Division.) Few government officials or legal scholars are willing to defend this scheme. Those who are nevertheless have been unwilling to comment on these new revelations or to offer a legal basis for this scheme. At least one seems to suggest that, because the executive branch did it, it must be legal.

In brief, the Obama administration violated numerous federal laws, including criminal laws, to provide thousands of dollars of benefits to members of Congress for the purpose of preventing members from voting to change ObamaCare. Martha Stewart went to jail for less. Congress has proven unwilling to investigate this obvious fraud, precisely because members of Congress from both parties benefit from it. The Trump administration has kept this illegal arrangement going for the same reason the Justice Department has not investigated the crimes committed implementing it: the beneficiaries of this fraud are extremely powerful and united in their determination both to perpetuate it and to hide it from voters.

The scheme is illegal, as Malcolm and I explain, in part because it relies on Congress enrolling in coverage through the District of Columbia’s small-business Exchange (also known as a “SHOP” Exchange), even though both federal and D.C. law prohibit employers with more than 100 workers from participating in SHOP Exchanges. Congress employs thousands upon thousands of people. Congressional officials falsified the applications they submitted to the D.C. SHOP Exchange on behalf of the House and Senate by claiming each employs fewer than 100 people. All by themselves, those false statements are prosecutable under 18 U.S.C. § 1001, with each count exposing the responsible officials to up to five years in prison.

Malcolm and I found that after those false statements became public in late 2014, D.C. dropped the employer-size question from its SHOP Exchange applications. At a minimum, this means D.C. officials were not enforcing the limits federal and D.C. law place on SHOP Exchange participation. It also has the appearance of a cover-up: after congressional officials made potentially prosecutable false statements about Congress’ eligibility for a federal program, D.C. officials stopped asking all applicants about that eligibility criterion. And when those officials continued to make other false statements on their applications, the D.C. government just stopped requiring applications entirely. Finally, we found Congress has since admitted to D.C. that it employs thousands of people and that D.C.’s SHOP Exchange has never turned down any employer for participation based on the employer’s size.

One must admire the brazen evasiveness of the D.C. government’s response to this additional evidence of the illegality of this scheme:

The claim that federal regulations don’t allow D.C. to ask small businesses who renew their SHOP Exchange participation about how many people they employ merely begs the twin questions of whether Congress was ever a qualifying small business with fewer than 100 employees (obvious answer: no) and whether there was ever any justification under either federal or D.C. law for treating Congress as if it were. If D.C. officials are such sticklers about the law, perhaps they could answer that question. Or they could explain why they chose to eliminate the employer-size question for new applicants in 2015, and eliminate those applications altogether in 2016. The fact that D.C. has never turned down any employer based on firm size suggests D.C. officials may not be such sticklers for the law after all. Their silence leaves us guessing.

University of Michigan law professor Nicholas Bagley commented on our latest revelations, yet he likewise evades the main issue. Bagley acknowledges congressional officials made false statements to the D.C. government, and that those false statements were part of an effort to draw money from the federal treasury to benefit members of Congress. But he says it’s all nice and legal because the Office of Personnel Management says so, and those false statements are not prosecutable because D.C. officials knew they were false, which means they were not “material” to the decision to allow Congress to participate in D.C.’s SHOP Exchange.

I see at least three problems with Bagley’s approach to this issue.

First, according to the United States Attorneys’ Manual, in which the Department of Justice provides guidance to federal prosecutors around the country, “the test for materiality under 18 U.S.C. § 1001 is not whether the false statement actually influenced a government function.” Instead, the Department of Justice explains, “To establish materiality as an element, it is sufficient that the statement have the capacity or a natural tendency to influence the determination required to be made.” Unless we are willing to argue that statements regarding eligibility criteria for federal programs do not have a natural tendency to influence eligibility determinations for federal programs, then these false statements satisfy the test for materiality under 18 U.S.C. § 1001.

Second, Bagley’s theory ultimately reduces to, “When the president does it, that means that it is not illegal.”

Imagine federal law creates Benefit A for some group. Maybe a subsidy or a tax break. Maybe for seniors or veterans. Imagine federal law denies eligibility for Benefit A to members of Congress. Finally, imagine a corrupt president—say, President Nixon—realizes that providing Benefit A to members of Congress would keep them from reopening a law important to the president, and therefore the president personally directs a federal agency to determine that Congress is “a special case” where those restrictions do not apply. Under Bagley’s theory, if implementing that exemption requires government officials to violate laws against false statements or other federal laws, they would be immune from prosecution. Even if their actions satisfy all the elements of a federal crime, they would be immune simply because…the president said what they are doing is legal.

I suspect Bagley isn’t entirely comfortable with how much power this theory would give the executive branch—especially this one. Bagley’s theory would allow the executive to gift members of Congress by manufacturing exemptions to eligibility restrictions on benefits throughout the federal code. It would even allow the president to find special exemptions for Congress where—as in this case!—the purpose of the provision the executive is interpreting is to deny Congress special treatment. And it would eliminate perhaps the only feasible remedy to stop such abuses.

Third, and finally, in the four years since Judicial Watch’s Freedom of Information Act request first exposed these false statements, neither the OPM, nor Bagley, nor anyone else who defends Congress’ ObamaCare exemption has articulated a legal theory as to why the explicit employer-size limitations that federal and D.C. law impose on SHOP Exchange participation should not apply to Congress. Nor has anyone articulated a theory as to how OPM, whose authorizing statute allows it to pay only for health plans it has “approved” to participate in the Federal Employees Health Benefits Program, has any legal authority to contribute to the premiums of plans it has not so approved.

Instead, the OPM says we have determined it is legal, and its defenders say it is legal because they say it is.

This Cato Institute article was republished under Creative Commons Licensing.