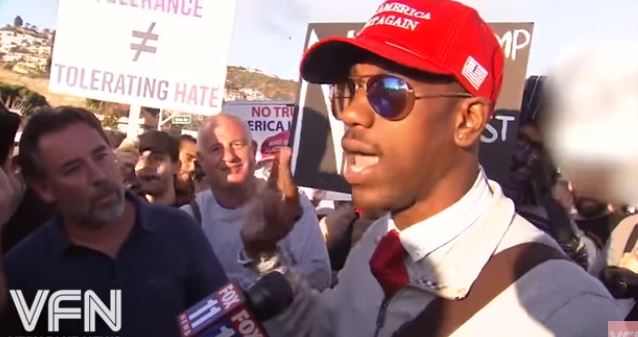 The optics of the video (see below) are chilling: At the August 20 “America First” rally in Laguna Beach, California, a large white man sucker-punches a well-dressed, slightly built black man.

Perhaps ironically, this incident does not fit stereotypical expectations: The punching victim, R. C. Maxwell, was not protesting against the anti-illegal immigration rally but attending the rally to support President Trump’s immigration agenda.

And Maxwell’s alleged assaulter, Richard Losey, who was arrested for battery, is not associated with the anti-minority hate groups on display at the Charlottesville “Unite the Right” event. Rather, Losey was protesting the rally alongside masked Antifa members who decried the alleged racism of Trump’s policies.

But even more unsettling than the attack itself is Losey’s justification for hitting Maxwell. The Laguna Beach police reported that Maxwell was “peacefully speaking with” counter protesters. Maxwell himself claims that he went over to the counter protester’s side “to see if I could engage them with dialogue.”

But on Twitter, Losey boasted of his attack, writing, “I did it because he would [not] stop talking about Trump when all of us told him a thousand times we didn’t want to hear it.” In another tweet, Losey wrote, “I did what I had to do… his input wasn’t wanted… He had it coming.”

Losey’s lack of imagination is startling. His tweets argue that another person’s dissenting opinion – offered on public property – merit a violent response by virtue of an audience’s dislike of the speaker’s viewpoint. And Losey’s words deny moral responsibility for his actions by suggesting that he had no other choice than to proceed with violence.

But Losey (or anyone else in Losey’s position) had many options other than violence.

Even if Maxwell’s words were truly horrific, Losey could have simply let him speak and allowed any genuinely hateful rhetoric to make itself manifest. And, in the end, Losey could have recognized that Maxwell’s freedom of speech was more important than Losey’s and his associates’ dislike of anything Maxwell said.

It would be easy to dismiss Losey’s behavior and self-justification as that of an unhinged aberration. But multiple episodes of violence against those supporting Trump or conservative views suggest otherwise, and the result of this violence is to drive free expression of such views away from the public square.

We should also recognize that as violence against people who hold more mainstream Trumpian or conservative views becomes more common and even acceptable in some circles, the increasingly popular idea of denying First Amendment protections to those expressing openly racist viewpoints will be seen as a moderate and irenic position instead of as an insidious threat against liberty.

There is almost always a peaceful and wiser alternative to violence.

The scope of speech that is deemed unworthy of First Amendment protection will, in turn, grow wider and wider, and our liberties as a whole will increasingly be seen as negotiable. We also do well to remember that any government coercion that would limit First Amendment liberties has this in common with the tactics of violent thugs: they both use the threat of force to silence those opinions deemed unfit for public expression.

Unless one is physically attacked, there is almost always a peaceful and wiser alternative to violence. Let us tap into the countless opportunities afforded to us when we pursue, in the words of FEE founder Leonard Read, Anything That’s Peaceful. And let us remember Lawrence Reed’s question, Are We Good Enough for Liberty?

If we jettison virtue and reason and instead pursue or countenance violence or government coercion against those holding opposing viewpoints, the answer will ultimately be no.

David V. Urban is Professor of English at Calvin College. His earlier article on Shakespeare’s problematic Henry V appears in Liberty Matters. He is a member of the FEE Faculty Network.