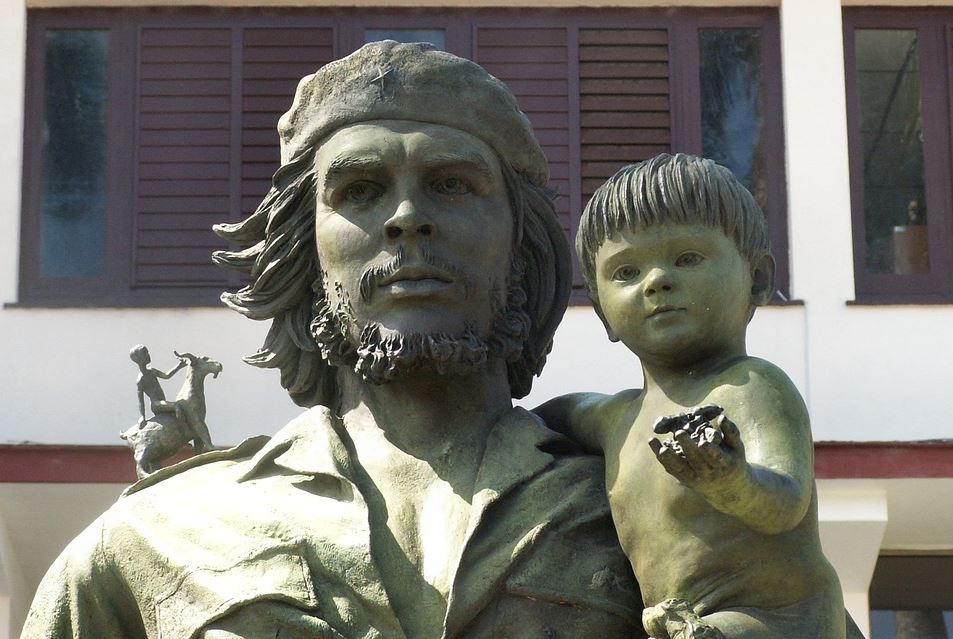 Rosario is Argentina’s second oldest city. Located by the Paraná river, it is the home of hard-working people, a busy port, the national flag memorial, and the country’s bitterest football rivalry between Rosario Central and Newell’s Old Boys.

It is also the birthplace of Ernesto “Ché” Guevara.

In the last fifteen years or so, coincidentally with the rise of leftist populism in Argentina and the rest of South America, there have been plenty of tributes to the figure of “Ché.” All of these tributes are state-financed, one way or another. The most prominent is a 13-foot high statue placed in a public square.

Fundación Bases has its main headquarters in Rosario. Teaming up with the Naumann Foundation, we decided to launch a campaign to remove all the state tributes to “Ché” Guevara. We knew this would generate controversy but, honestly, we didn’t expect the level of reaction that has occurred.

So, who was this “Ché” Guevara? Ernesto Guevara de la Serna, globally known as “Ché”, came from an aristocratic, though impoverished, family. He studied medicine and when he was about to finish university he took an initiatory trip across Latin America. In some of the places he visited he saw harsh realities and even exploitation. This part of his life made it to the big screen, starred by then Latin sensation Gael García Bernal.

Nonetheless, he wasn’t a communist yet. As Juan José Sebreli explains, he was more of the adventurous type, looking for a cause, whatever cause this might be. In fact, he was planning to go to Europe when he met the Castro brothers in Mexico in 1955. He joined them and become a revolutionary for the “liberation” of Cuba.

Under the command of Fidel Castro, “Ché” achieved his only military victory. All his other revolutionary adventures were disastrous and eventually got him killed. However, during the Cuban struggle, he quickly became known for his ruthlessness and violence. He executed many, both during the conflict and after the revolutionaries got into power. He not only precisely described how he blew some poor bastard’s brains out but also acknowledged at the United Nations General Assembly that his government executed many and would continue executing as long as it was “necessary.”

He was also responsible for the opening of the first Cuban concentration camp – where homosexuals and Christians were tortured and re-educated.

What is more, he believed hate was the most powerful force and was an admirer of Joseph Stalin.

As a public official, he was president of Cuba’s central bank and minister of industry. In both roles, he failed miserably. As central banker, he basically destroyed the Cuban peso – which for many decades had been at parity with the US dollar. As industry planner, his administration was so chaotic that they even bought snow removal machines for a Caribbean country like Cuba.

The regime “Ché” helped established in Cuba is one of the most authoritarian in the world. Since the triumph of the revolution in 1959, more than 10,000 have been killed, 80,000 have died at sea trying to escape the island, and 1.5 million have had to forcefully migrate.

Remove All Tributes to ‘Ché’

With all this in mind, Fundación Bases launched the campaign “Remove all tributes to ‘Ché’ Guevara.” We are asking the city government to eliminate the plethora of state tributes that have mushroomed in the last fifteen years.

We know it will be difficult to achieve this because the same politicians who started this “Ché” industry are still in power. But we also know we are starting a conversation and a necessary debate.

We want kids who wear “Ché” T-Shirts to know that he’s not an article of fashion but a cold killing machine. Wearing a T-Shirt with his face is the same as wearing one with Stalin, Mao or Hitler.

Moreover, we want to explain to the people in our city that this “Ché” cult is a falsification of history. The local authorities who have raised him to the level of pagan saint neglect to mention his well-documented crimes but also that he has done nothing for Argentina. In fact, he only lived in Rosario until the age of one.

What Fundación Bases stands for is classical liberalism. And classical liberalism is the anti-Ché. We believe in cooperation between individuals and nations, free trade, and peace. As our Executive Director Franco López put it in an interview with Colombian media, “we are for human rights for everybody, regardless of their political ideology.”

Many Friends and Some Foes

Immediately after being launched, the campaign picked up the attention of local media. And in July Jack Aldwinckle wrote a half-page article in The Economist.

After the article, media attention skyrocketed. From then on, basically, all major newspapers, radios shows, and TV channels in the country have covered the campaign. For example, in “La Nación” – the most traditional nation-wide newspaper in Argentina – our article was the most read of the day.

And that’s not all. We also caught the attention of international media like “La Razón” (Spain), “El Mercurio” (Chile), “El Comercio” (Perú), “Radio Marti” (Miami), just to name a few.

The general public reaction towards our campaign has been spectacular. Our posts on social media are highly retweeted and shared. Roughly 65 percent of the social media comments have been in favor of our view. What’s more, our online petition has received thousands of signatures.

Of course, it would have been impossible to escape some leftist hysterical reactions. We have been called all names you can imagine, from “neoliberals” to “neonazis.”

We have received death threats and some very sick wishes. For instance, a commenter on Facebook called for the arrival of a communist dictatorship to make us all disappear.

“Ché” Guevara could not have said it better.