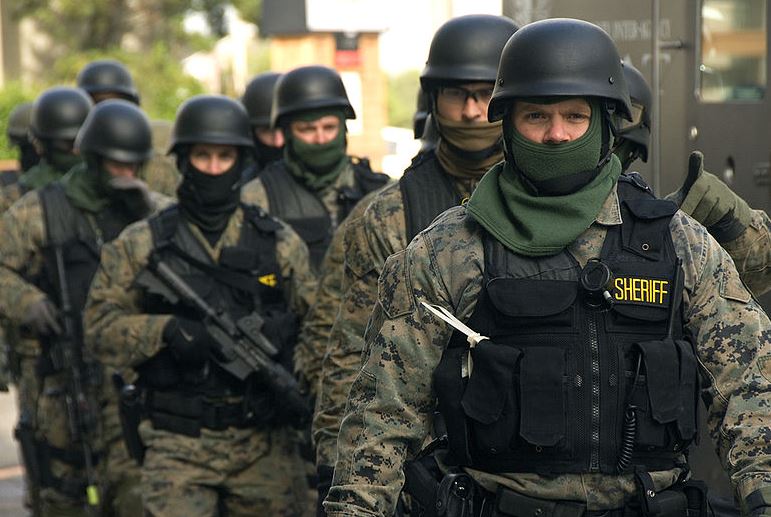 Earlier this year, a study conducted by researchers from Harvard, Stanford, Cincinnati, and Gardner-Webb concluded that the Pentagon’s 1033 weapons transfer program made participating departments more likely to engage in deadly violence.  After receiving 1033 gear, departments were more likely to kill civilians as well as dogs.  The researchers included the number of dog killings by police (which, according to the Department of Justice, number around 10,000 a year) in order to control for possible variations in human behavior during the period of the study.

[D]ue to concerns of endogeneity, we re–estimate our regressions using an alternative dependent variable independent of the process by which LEAs request and receive military goods: the number of dogs killed by LEAs. We find 1033 receipts are associated with an increase in the number of civilian dogs killed by police. Combined, our analyses provide support for the argument that 1033 receipts lead to more LEA violence.

The researchers pointed to four areas of militarization that drive the increase in violence:

[W]e argue that increasing LEA access to military equipment will lead to higher levels of aggregate LEA violence. The effect occurs because the equipment leads to a culture of militarization over four dimensions: material; cultural; organizational; and operational. As militarization seeps into their cultures, LEAs rely more on violence to solve problems.

It turns out that having a hammer really does make everything look more like a nail.

But what if that increased violence is justified by increased police readiness to deal with emergency situations?

When asked to justify the push for militarization, many law enforcement agencies are quick to point to terrorist attacks and mass murders as a justification for the equipment. Indeed we can imagine situations in which the police might legitimately need grenade launchers or .50 caliber rifles (though the thousands of bayonets local cops have taken from the federal government may be tougher to explain).

But such events are exceedingly rare, while history proves that the police deployment of militarized weapons and tactics will not be. Police routinely cite rare hypothetical emergencies to justify tactics and policies that end up becoming far more routine and abusive.

SWAT teams were originally designed to handle hostage situations and active shooters. Today they often function as hyper-violent warrant servers, as the number of SWAT raids has ballooned from hundreds per year to tens of thousands and responding to hostage situations has given way to serving search and drug warrants.

Police defend civil asset forfeiture with appeals to “taking the profit out” of terrorist organizations and drug cartels, but black market drug profits remains strong as thousands of regular Americans have their property taken without charge or trial.

Law enforcement agencies purchase military-grade surveillance devices such as Stingray cell phone trackers with terrorism grant money, and justify the outrageous secrecy that shrouds them on national security grounds, but they’re virtually never used for terrorism investigations, instead being deployed thousands of times for routine law enforcement investigations as an end-around the warrant requirement.

In other words, military weapons and tactics are inevitably used far more often in everyday policework than in the rare situations that supposedly justify them.

Contrary to Attorney General Sessions’ dismissal, the damage done by these government policies is not “superficial.” It’s not superficial when a SWAT team throws a flash grenade in a baby’s crib and disfigures the infant’s face, or when a family’s life is ruined by militarized police looking for tea leaves, or when protesters find themselves staring down the barrels of sniper rifles and accosted by masked, camo-wearing, rifle-toting police units.

Combined with President Trump’s recent pardon of Sheriff Joe Arpaio (who is no stranger to overly violent militarized raids and was convicted for repeatedly violating people’s rights in defiance of a court order), this move sends a strong message that police restraint and accountability are taking a back seat in this administration.