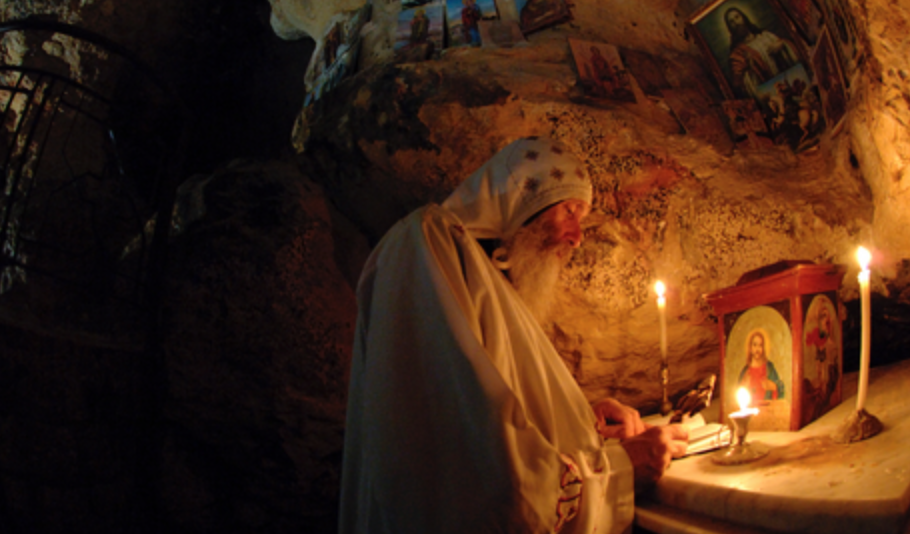 Thomas Jefferson was a deist that believed the ultimate value of Christianity was in its ethical teachings.

So he famously created his own Bible by literally cutting and pasting passages from the Gospels that agreed with his doctrine and omitting those passages (such as the miracles and mentions of the supernatural) that conflicted with it.

The creation of Jefferson’s Bible has become something of an archetype of a perennial tendency for Christians to project their own images on to their professed religious faith; to interpret the Christian message as remarkably aligned with their own personal preferences and lifestyle choices.

This point was recently brought home to David Bentley Hart—regarded as one of the greatest religious scholars and English prose stylists today—as he was working on a translation of the New Testament for Yale University Press (which is due out in October).

The work forced him to read the original Greek text of the New Testament more carefully than even most professional theologians tend to do. As he did so, he came to an uncomfortable realization, which he put down in an essay for Commonweal titled “Christ’s Rabble”:

“What did surprise me, however, was the degree to which the whole experience left me with a deeply melancholy, almost Kierkegaardian sense that most of us who go by the name of ‘Christians’ ought to give up the pretense of wanting to be Christian… I mean that most of us would find Christians truly cast in the New Testament mold fairly obnoxious: civically reprobate, ideologically unsound, economically destructive, politically irresponsible, socially discreditable, and really just a bit indecent.”

Hart was particularly struck by the New Testament teachings against wealth. For most of Christian history, the majority interpretation has been that wealth in and of itself is not bad, but rather an unhealthy desire or attachment to it, or the abuse of it. Such, undoubtedly, is a comfortable interpretation for us who happen to live in a wealthy country like America. But according to Hart, this is not what the New Testament actually says:

“Perhaps, to avoid trying to serve both God and Mammon, one need only have the right attitude toward riches. But if this were all the New Testament had to say on the matter, then one would expect those texts to be balanced out by others affirming the essential benignity of riches honestly procured and well-used. Yet this is precisely what we do not find. Instead, they are balanced out by still more uncompromising comminations [Hart’s always good for a vocabulary lesson] of wealth in and of itself. Certainly Christ condemned not only an unhealthy preoccupation with riches, but the getting and keeping of riches as such.”

Hart then proceeds to examine a number of the New Testament texts dealing with wealth in order to show just how radical and uncompromising they are, and then finishes with the following reflection:

“Throughout the history of the church, Christians have keenly desired to believe that the New Testament affirms the kind of people we are, rather than—as is actually the case—the kind of people we are not, and really would not want to be. The first, perhaps most crucial thing to understand about the earliest generations of Christians is that they were a company of extremists, radical in their rejection of the values and priorities of society not only at its most degenerate, but often at its most reasonable and decent. They were rabble. They lightly cast off all their prior loyalties and attachments: religion, empire, nation, tribe, even family. In fact, far from teaching ‘family values,’ Christ was remarkably dismissive of the family. And decent civic order, like social respectability, was apparently of no importance to him. Not only did he not promise his followers worldly success (even success in making things better for others); he told them to hope for a Kingdom not of this world, and promised them that in this world they would win only rejection, persecution, tribulation, and failure. Yet he instructed them also to take no thought for the morrow.

This was the pattern of life the early Christians believed had been given them by Christ. As I say, I doubt we would think highly of their kind if we met them today. Fortunately for us, those who have tried to be like them have always been few. Clement of Alexandria may have been making an honest attempt to accommodate the gospel to the realities of a Christian empire, but it was those other Egyptians, the Desert Fathers, who took the Gospel at its word. But how many of us can live like that? Who can imitate that obstinacy and perversity? To live as the New Testament requires, we should have to become strangers and sojourners on the earth, to have here no enduring city, to belong to a Kingdom truly not of this world.

And we surely cannot do that, can we?”

I don’t wish to here post any firm conclusions on Hart’s interpretation of the New Testament on wealth, simply because I haven’t arrived at any firm conclusions about it. But I will say that I broadly agree with his point that Christianity, as it’s commonly lived out today in the Western world, doesn’t seem all that radical. In fact, it seems to fit nicely in with the pattern of modern, secular life. And I’ve made the same point that Christians should be cautious about interpreting a lot of what’s in the New Testament as mere hyperbole.

Personally, the way most people interpret Christianity today, I don’t really see what the need for it was. If Jesus Christ principally came to institute a new “religion” whose essence is a number of laws, moral injunctions, and regular worship, then I say that the world already had it in Judaism minus some superadditions, of course (e.g., the doctrines of the Trinity and the divinity of Christ, the practice of the Eucharist, those confusing beatitudes, etc.).

If, on the other hand, Christianity essentially calls one to completely turn away from the cares, concerns, anxieties, and logic of the world—which seem false and wholly unsatisfying for all but a minority—to turn toward God through a way of life that appears strange and other to most, then maybe that would be something radical… then maybe that would be “good news”.