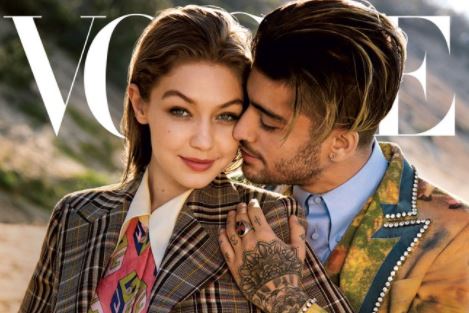 Vogue magazine might know what’s in vogue for fashion, but its latest attempts to seem culturally correct have failed miserably.

This month, Vogue attempted to ally itself with the latest trend in inclusivity—gender fluidity—by featuring celebrity power couple Zayn Malik (formerly of the boy band One Direction) and model Gigi Hadid on its August cover. The headline? “Gigi Hadid and Zayn Malik Are Part of a New Generation Who Don’t See Fashion as Gendered.”

The article begins with a weird, esoteric explanation of gender fluidity, likening it to a scene from Virginia Woolf’s Orlando and then tracing its popularity to Tumblr. The magazine offered observations such as this one by Olivier Rousteing, the creative director of Balmain: “They don’t want to be defined. . . You see boys wearing makeup, girls buying menswear—they are not afraid to be who they are.”

But the cover models seem to have a looser grasp on non-gendered fashion.

“What was that T-shirt I borrowed the other day?” Malik asks his girlfriend. (The Anna Sui, she responds.)

Then, Hadid adds, “It’s not about gender. It’s about, like, shapes.”

Two celebrities advocating dressing however you like because fashion isn’t binary—rather, it’s about, like, shapes—is hardly shocking. But it provoked a significant backlash, particularly on social media, and the magazine was forced to issue an apology, as Entertainment Tonight reported:

“The story was intended to highlight the impact the gender-fluid, non-binary communities have had on fashion and culture,” read a statement by a Vogue spokeswoman. “We are very sorry the story did not correctly reflect that spirit – we missed the mark.”

Vogue’s critics aren’t wrong. Even though it brands itself as such, the magazine isn’t supportive of the community of people who actually identify as gender binary—that is, the people who don’t embrace gender fluidity as a fashion trend, but as an identity. If it were, it could have featured an androgynous model.

But Vogue’s misstep is part of a larger cultural problem: Increasingly, companies and brands are revealing the rot at the heart of campaigns for “inclusivity.” These businesses are not really trying to be inclusive; they are trying to appear inclusive. The problem is not that Vogue isn’t progressive or sensitive enough to politically correct concerns. The problem is that it pretends to be. And when it fails, it fails with a washout that approaches farce. Consider the magazine’s July cover, which featured singer and actress Zendaya, whom the magazine called an “it girl” and “activist.” Her credentials as the latter? She attended the Women’s March on Washington and supported Black Lives Matter on Twitter. How outré.

This wasn’t the first time Vogue has made this mistake. The magazine caught heat just a few months ago, celebrating diversity on its coverwith seven models, only three of whom were non-white, and only one of whom was plus-sized. (Diversity within the confines of a degree of thinness and whiteness lacks a certain authenticity, to say the least.)

Former British Vogue fashion director Lucinda Chambers recently penned a scathing critique of the industry and of Vogue in particular, saying she hasn’t read it in years:

What magazines want today is the latest, the exclusive. It’s a shame that magazines have lost the authority they once had. They’ve stopped being useful. In fashion we are always trying to make people buy something they don’t need.

But it’s not just exclusive fashion that magazines like Vogue are peddling; it’s the latest in fashionable politics. Unfortunately, as Vogue discovered, not everyone is buying it.

This article was first published by Acculturated. Read the original article.