To Fix Healthcare, We Need to Repeal a Lot More than Obamacare 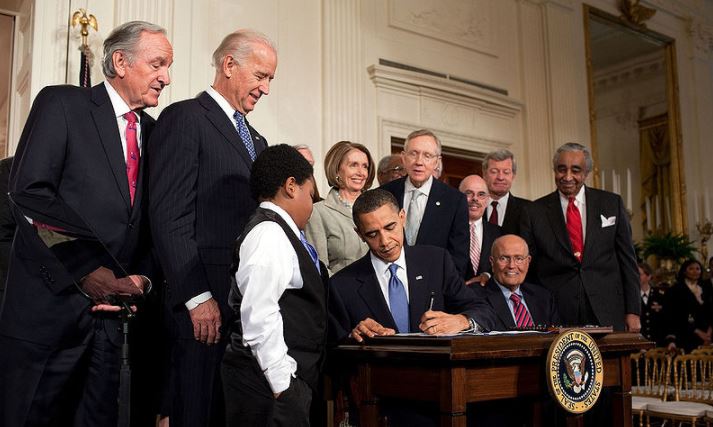 But, there’s been little reason to celebrate the GOP’s effort at an Obamacare repeal. And now that the effort appears doomed, there seems to be little reason for prolonged lamentation.

Indeed, right up until the apparent failure of the repeal effort this week. the whole affair has been marked by confusion, muddled messaging, and a clear lack of any direction beyond scoring some political points against the supporters of Barack Obama.

The Senate version, for example, only partially repealed the Obamacare tax while leaving much of the rest of the law untouched. Worse yet, the Senate version added bailout provisions for insurance companies.

If actually improving the lives of taxpayers and constituents were the goal, the GOP could have focused less on specifically repudiating the Obama agenda, and instead looking for ways to undo decades of government meddling in healthcare — which has produced the expensive, inflexible, and monopolistic healthcare system we have today.

Instead, the focus has been only on Obamacare itself — the repeal of which would only return us to the bad old days of 2013 when the healthcare sector was already long over-regulated, distorted, subsidized, and made far more expensive than would be the case in a functioning marketplace.

Even worse, the rhetoric surrounding the Obamacare-repeal effort has tended to send the message that things were more or less fine before Obamacare was passed, and this once it was repealed, things would improve. In truth, healthcare was already headed toward disastrous price increases and problems of falling quality even before Obomacare was passed. Given how government has come to dominate the industry, this should surprise no one.

Decades of Government Control and Subsidy

The pre-Obamacare world was one in which the United States spent more government money on healthcare than almost any other nation. That’s government spending, not total spending overall.

This data is from the world Health Organizations 2014 report on healthcare spending. The data pre-dates the implementation of Obamacare. Specifically, per capita government spending in the US comes in at $4,047 behind Norway ($5,198), Luxembourg (5,061), and the Netherlands ($4,070), and is also quite comparable to Denmark ($3,801).

Indeed, by the time Obamacare was passed, the US had already been piling on regulations and subsidies in the healthcare sector for more than 70 years.

However, it wasn’t until the 1960s that a real crisis began to appear on the horizon. As noted in Mike Holly’s article “How Government Regulations Made Healthcare So Expensive“:

The U.S. “health care cost crisis” didn’t start until 1965. The government increased demand with the passage of Medicare and Medicaid while restricting the supply of doctors and hospitals. Health care prices responded at twice the rate of inflation. Now, the U.S. is repeating the same mistakes with the unveiling of Obamacare (a.k.a. “Medicare and Medicaid for the middle class”).

This artificially inflated demand was then heaped on top of efforts that were already in place to restrict supply. Holly continues:

Since the early 1900s, medical special interests have been lobbying politicians to reduce competition. By the 1980s, the U.S. was restricting the supply of physicians, hospitals, insurance and pharmaceuticals, while subsidizing demand. Since then, the U.S. has been trying to control high costs by moving toward something perhaps best described by the House Budget Committee: “In too many areas of the economy — especially energy, housing, finance, and health care — free enterprise has given way to government control in “partnership” with a few large or politically well-connected companies”

So, we have for many years faced a situation in which the government works to subsidize healthcare — thus increasing demand — while simultaneously reducing supply. And yet, these efforts at regulating the industry, picking winners and losers, and enhancing monopoly powers have become to entrenched in the industry, we don’t even notice them anymore. They now seem natural. Some might even conclude they’re the result of natural market behavior.

The Overuse of Health Insurance

One of the most important aspects of the healthcare industry — something most now wrongly assume is a product of unhampered market forces — has been the use of health insurance as the mainstay in allocating healthcare resources. This over-reliance on insurance has produced  not a few unfortunate side effects. For example, the use of insurance to pay for common procedures has created moral hazard and thus over-utilization of healthcare services. Moreover, by inserting a third party between the consumer and the healthcare providers — a third party that obscures prices from the end user — consumers cannot make informed choices on the true costs of services and which are most prudent to use. This in turn drives up prices for all users, including cash-only customers and anyone who doesn’t fit into the inflexible and government-created employer-based insurance system.

Dr. Michel Accad discusses the origins of the health insurance system that got us where we are today:

[During the 1930s and 40s the] main boost to the health insurance industry … came from new legislation and administrative rulings.

State-level legislations were passed to allow pre-payment plans, such as Blue Cross and Blue Shield programs, to obtain non-profit, tax-exempt status and to offer insurance coverage without the reserve requirements imposed on commercial insurance companies…

More importantly, insurance programs benefited greatly from the federal Stabilization Act of 1942 which allowed companies facing scarce labor (during a time of price and wage control) to compete for this labor by offering health insurance benefits and by making those benefits exempt from payroll taxes.

There were also rulings preventing employers from canceling or modifying group insurance during the contract period, and rulings that established health benefits as wages, allowing labor unions to negotiate for the provision of health insurance on behalf of employees.

With successive legislation and rulings, commercial insurance entered the health care market more willingly and employers began to offer health insurance to employees on a very large scale. Between 1940 and 1950, the number of people with health insurance grew from less than 10 million to over 80 million Americans.

Holly notes some other developments as well:

In a less interventionist economy, market factors and competition had worked to restrain the use of health insurance. However, as new legislation worked to give insurance an advantage over cash-for-service healthcare, large insurance agencies came to dominate the industry. Over time, large providers like BlueCross/BlueShield would major major interest groups that worked to that insurance would assume a larger and larger role in the provision of healthcare.

Thus it is no accident that today’s tax law provides incentives to have health insurance while doing far less to incentivize health savings accounts and the purchase of healthcare services outside the insurance system. Cash-only and membership-based medical services function at a competitive disadvantage because governments have picked who the winners and losers should be. And insurance companies have already been declared the winners.

Meanwhile, a variety of government and quasi-government licensing laws and regulations restrict the production of healthcare services. Kel Kelly noted just how restrictive these regulations can be:

[Since the American Medical Association began restricting medical education], the US population has increased by 284 percent, while the number of medical schools has declined by 26 percent to 123. In 1996, the peak year for applications, only 16,500 candidates were accepted out of 47,000. While high rejection rates can be common in many schools, applicants to medical schools are usually among the brightest and highest-quality students and have put themselves through a very costly admissions process…. The medical monopoly also marginalizes or outlaws alternative or slightly alternative (i.e., competing) medical practices, along with nurses and midwives, who could perform many of the tasks doctors do today.

Meanwhile, in many jurisdictions, new hospitals cannot be built without permission of governments through a “certificate of need” process.

Obamacare Was Just More of the Same

The result of all this, of course, has been more expensive healthcare that is less competitive, less accessible, more restricted, and more geared toward the benefit of a few large special interests.

None of this is new to the world of Obamacare, and little of the problem will be undone by repealing Obamacare. In fact, Obamacare was really just a doubling down on a broken healthcare system that had been created decades earlier. Obamacare represents more of same, not a break from an imagined “free-market” past.

If repealing Obamacare is really the goal, the GOP should instead focus on repealing and undermining the edifice on which Obamacare was built: the highly regulated, subsidized, and manipulated healthcare markets that dominate today.

This article was originally published by the Mises Institute . Read the original article.