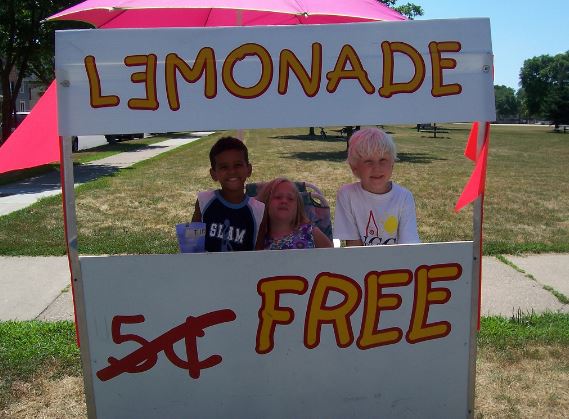 On summer evenings when I drive home from work, I often see small children selling lemonade in my neighborhood. Most of the time I honk my horn and wave, but occasionally I’ll pull up and purchase a cup, usually for 25 cents.

I happen to like lemonade, but that’s usually not my primary motivation for stopping to purchase a glass. Rather, it’s to offer a bit of encouragement to the budding entrepreneurs who’ve put in the work and taken the time to set up shop in the hopes of making a small profit for themselves (and to just have some fun).

Industry, free exchange, and entrepreneurship seem like virtues an aspiring society would wish to foster in their young. Alas, this is often not the case.

In a Thursday article for The Telegraph, a man named Andre Spicer wrote about the experience of his five-year-old daughter who tried to open a small lemonade stand in the family’s East London neighborhood.

“After about 30 minutes, four local council enforcement officers stormed up to her little table,” he wrote. “‘Excuse me,’ one officer said as he switched on a portable camera attached to his vest. He then read a lengthy legal statement – the gist of which was that because my daughter didn’t have a trading permit, she would be fined [$195]. ‘But don’t worry, it is only [$117] if it’s paid quickly,’ the officer added.”

Spicer later wrote: “My daughter burst into tears, repeating again and again ‘have I done a bad thing’?”

I can’t imagine a worse introduction to entrepreneurship than that experienced by Andre Spicer’s little girl, in which four uniformed men arrive, shut you down, and fine you an amount of money larger than you can comprehend.

Before one becomes tempted to think such things only happen in Europe, I’ll point out that this sort of thing also happens routinely in the U.S.

Mowing the lawn for a neighbor, watching a friend’s pet, helping a deaf person communicate, and many other simple tasks can result in sharp fines in many states if one accepts monetary compensation without the appropriate permit (which is often quite expensive).

These consumer protection laws usually help special interest groups and governments much more than consumers. As Adam Smith wrote in The Wealth of Nations,

Worse yet, such regulations impede entrepreneurship and teach the wrong lessons to people seeking to make their way in life.

Ronald Reagan once observed that “Entrepreneurs and their small enterprises are responsible for almost all the economic growth in the United States.”

Considering that the U.S. economy has not eclipsed 3 percent annual growth since 2005, might it be time to consider creating a climate that fosters entrepreneurship and free exchange instead of stifling it?