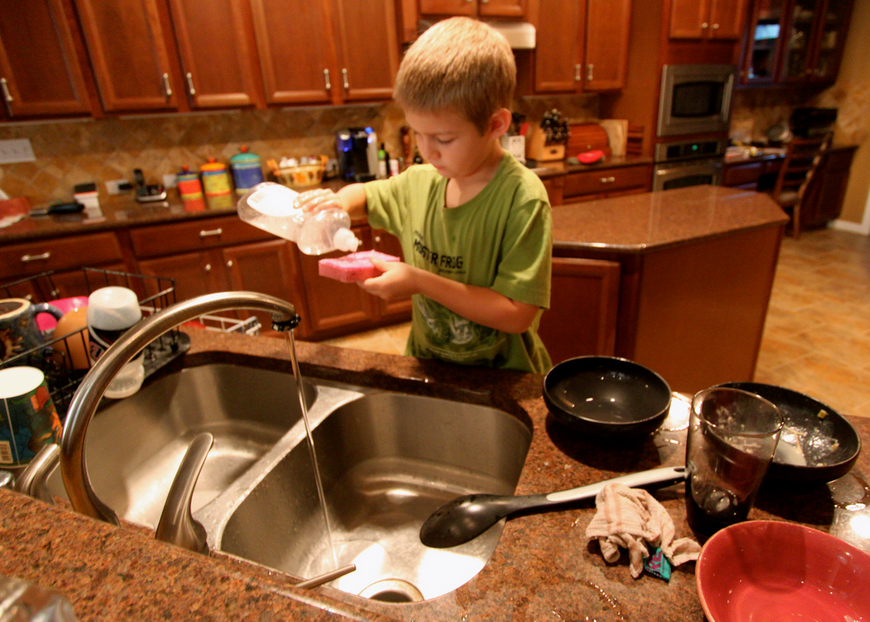 As a little girl, one of my sister’s dreaded chores was sweeping the kitchen floor. Although our kitchen was relatively small, she somehow managed to make the task stretch on for… well, quite a while.

Although we chuckle about it now, the task was quite torturous at the time, not only for my sister, but for my mom as well. The torture eventually paid off, however, and soon my sister was the best sweeper in the household.

This experience came to mind upon reading Donna Gorman’s experience with giving her children chores over the summer. Up until this point, she writes in The Washington Post, she and her husband have taken care of a myriad of household tasks and let their four children (ages 8-17) go about their normal business. This summer, however, she decided it was time to push some of that work on them:

“I bought a bunch of oversized Popsicle sticks and used a thick black marker to label each one. On the last night of the school year, I brought an old jar to the table, stuffed with the sticks, and explained to the kids what our summer would look like.

Every morning, they will go to swim practice, come home, eat breakfast and do their summer school assignments. After that, they’ll each pull two sticks from the jar — no peeking allowed. And they’ll do whatever chores are written on the sticks.”

As Gorman notes, the new system hasn’t always been peachy, but it is providing a number of perks. These include some of the following:

1. More Time for Parents
Gorman has had to put a little more time in on the front-end to teach tasks, but expects that to soon change as her children grow accustomed to their chores. According to the Bureau of Labor Statistics, this move could turn into an extra six and a half hours a week by simply turning all of the interior cleaning over to her children.

2. Saves Money
Not only does Gorman save time, she saves money as well. According to HomeAdvisor, the average cost of cleaning service is $165 dollars a pop. If cleaning occurs on a weekly basis, this savings amounts to almost $9,000 a year if a family can train its children to take responsibility for the task.

3. Helps Kids Appreciate Their Free Time
As Gorman explains, her children are not spending their entire summer wasting away as Cinderella. They are allowed to have downtime and do fun things – but only once the chores are done. As many will testify, it is delayed gratification like this which builds excitement and increases pleasure in the reward.

4. Fosters Success and Responsibility
Although responsibility is difficult, the lessons learned from it often bring great success. According to Dr. Marty Rossmann, children who begin chores at early ages learn “responsibility and self-reliance,” and are more likely to enjoy “early career success” than their peers who did not.

5. Builds Gratitude
As Gorman explains, some of the tasks she listed on the popsicle sticks were ones her children weren’t even aware of, such as dusting the baseboards. By introducing children to previously unknown chores and household items, kids can build a greater appreciation for the house they live in and the parents who have faithfully cared for it.

Today, only 28 percent of American adults require their children to do chores. Given these benefits, is it time more Americans followed Gorman’s lead and used the summer break to introduce their children to the value of hard work?