Why You Shouldn’t Rage Against Last-Second Mergers 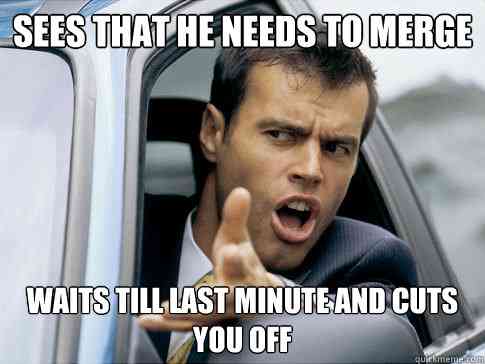 A scenario many of us experience on a weekly basis:

You’re stuck in traffic on a two-lane highway, and the lanes converge into one up ahead. You merged early, and have been patiently waiting your turn behind other cars. Then some jerk zooms by in the other lane, goes all the way to where lane ends, and merges in about 15 cars ahead of you.

Well, as it turns out, that “jerk” is in the right, at least from an efficiency standpoint.

As an article on How Stuff Works explains:

“[S]tudy upon study proves the upstanding early-mergers among us are just creating a single long, slow line of traffic that’s not only frustrating for drivers, it’s inefficient because it minimizes the amount of usable road—and it even causes accidents.

Because the system uses all the available road space for as long as possible, it cuts congestion by 40 percent. It also reduces crashes because all the traffic is moving at the same rate of speed rather than some cars going very fast while others poke along.”

Because of these findings, several states now have campaigns to retrain their drivers to use what’s called the “zipper merge”, i.e., where cars use both lanes and take turns merging at the end point.

But many predict this retraining exercise will be tough-going.

For one, the virtue of politely waiting one’s turn in line—and the fear of shame from not doing so—has been ingrained in us by society from a very early age. It’s not a bad thing; in fact, it’s probably very important in a society in which 81% of people are crammed into urban areas.

But the ingrained nature of this habit means it’s hard to alter, even when it’s for the sake of the hallowed god of efficiency. In fact, as a Business Insider article pointed out:

“When we banish typical line rules, research has found, the sense of fairness that accompanies them goes out the window. People feel robbed… People who stand in line longer feel they are more deserving of service because they paid for it with their time.”

Secondly, many people tend to use the act of denying a “cutter” as something of a last stand. Beaten down by life, frustrated by work, and angry about what’s happening in the news, boxing out some last-minute merger helps them feel like they’ve regained some control. This is their moment when they can bravely face their enemy (from behind a layer of steel and aluminum), hug the bumper of the car in front of them, and like Syrio Forel say “Not today!”

In today’s stressful world, if we can remove one more temptation for irrational anger—what Evagrius Ponticus (345-399) called that “most fierce passion” which “darkens the soul”—I think that’s a good thing.