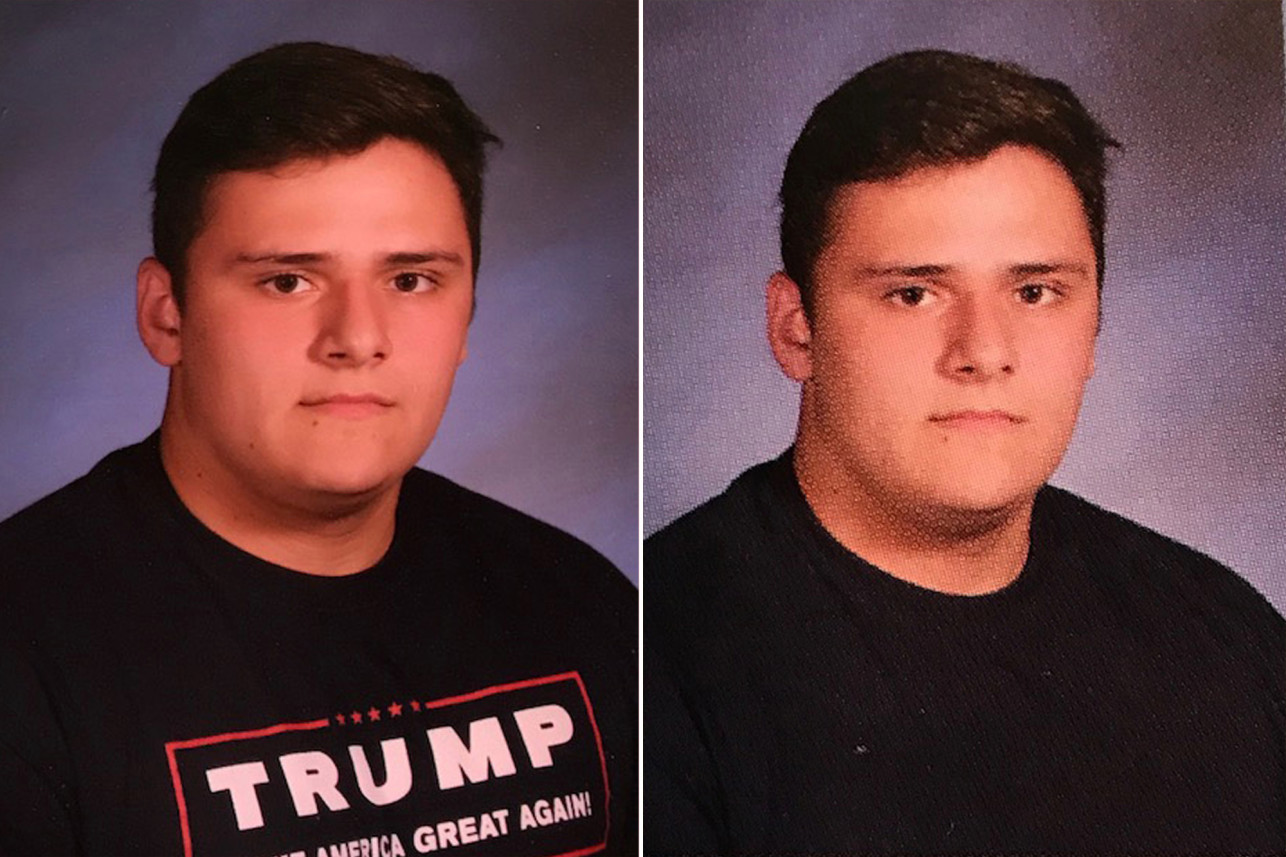 “When 17-year-old Grant Berardo wanted to wear a political T-shirt on school picture day in October, his parents told him it was fine.

His “TRUMP Make America Great Again!” shirt did not violate the dress code at Wall Township High School in central New Jersey because it did not reference drugs or alcohol or weapons. Instead, it simply featured the Republican presidential nominee’s campaign slogan. …

But when the junior received his yearbook last week, he noticed something was missing from the photo: President Trump’s winning campaign slogan.

In his yearbook photo, a copy of which was provided to The Post, Grant appears to be wearing a plain, dark-colored T-shirt.”

Berardo was not the only student affected:

“At least two other students at the school had similar experiences: A Trump logo was apparently edited out of junior Wyatt Dobrovich-Fago’s photo, and his sister, Montana, was missing a Trump quote that was meant to appear beneath her photo.”

The censorship of the photos and quote could arguably be a violation of free speech, but there’s a problem: it’s unclear who edited the photos.

Teen’s Trump T-shirt censored in yearbook photo https://t.co/mYUmemZXAP IN the tank WALMART did Obama shirts to associates & NOT TRUMP

So far, there have been no reports of Hillary Clinton T-shirts or quotes being edited out.

Berardo’s father, meanwhile, is calling for a reprint of the yearbook with the original photo and a letter written and signed by the guilty party apologizing for their actions.

Many commenters were also appalled by the action, such as ConnecticutYank:

“I don’t like Trump at all, but I think it is appalling that these students had their political speech censored. One of the wonders of America is the freedom to express your political views. At very least, there should have been a discussion and criteria given, rather than removing political speech without comment.”

What do you think? Did the school handle the issue properly? Will this go down as a harmless prank or should the school pursue the probe until it has answers?