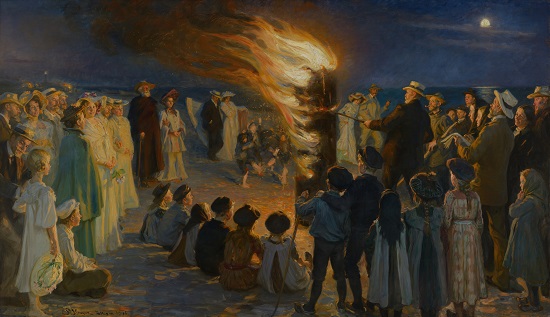 Tonight, June 23, is the setting for Shakespeare’s play “A Midsummer Night’s Dream.”

The setting was chosen for the fanciful comedy, presumably, because of the character of the feasting that took place throughout Europe on this night in times past.

In his introduction to the 1878 edition of the play, Samuel Neil provides us with a beautiful description of the traditions surrounding this night, thus allowing us to look back on a world that has been mostly lost to us in an age colored by scientific materialism.

As Neil explains, June 23 was also the vigil for the Birth of John the Baptist, and its coincidence with Midsummer Night led to the feast being celebrated with a blend of Christian theology and pagan customs:

“The day set apart, by the olden Church, for observance as that of the Nativity of St John the Baptist, has been for many centuries one of the most popular of the feast-days sanctioned by Christianity. It enjoys this acceptance with the people all the more because it coincides with Midsummer Day (24th June), and has inherited a number of the gladsome associations it had attracted to itself in heathen times… Hence the fact was, as the Rev. Joseph Hunter remarked, that ‘Midsummer Night was of old in England a time of bonfires and rejoicings, and in London of processions and pageantries. Looked back to, from our own days of incessant toil and intense application, such times of delight as our ancestors culled out from their everyday work, as holidays, appear to have been joyous, innocent, attractive.’ ‘On the vigils of festival days,’ says the pleasant old topographer of London, John Stowe, ‘and on the same festival days in the evenings, after the sunsetting, there were usually made bonfires in the streets, every man bestowing wood or labor towards them. The wealthier sort also before their doors, near to the said bonfires, would set out tables on the vigils, furnished with sweet bread and good drink, and on the festival days with meats and drinks plentifully, whereunto they would invite their neighbors, and passengers also, to sit and be merry with them in great familiarity, praising God for His benefits bestowed on them. These were called bonfires, as well of amity amongst neighbors, that being before at controversy, were there by the labor of others reconciled, and made of bitter enemies, loving friends… ‘On the vigil of St John’s Eve,’ he continues, ‘every man’s door being shadowed with green birch, long fennel, St John’s wort, orpine, white lilies, and such like, garnished upon with beautiful flowers, had also lamps of glass, with oil burning in them all the night; some hung out branches of iron, curiously wrought, containing hundreds of lamps, lighted at once, which made a goodly show.”

In addition to their pagan associations, the bonfires—which were lighted in the public squares on the feast—referenced Jesus’ words about John the Baptist in John 5:35: “He was a burning and shining lamp.” The people gathered would dance around the fire and occasionally leap through it, an action that was symbolically linked to the call for Christians to pass through the “fire” of repentance in their earthly lives.

On leaving the public square, the people would take some of the fire with them for their walks back home through the streets or forest.

There were also a number of superstitions associated with the feast. The plants mentioned above were believed to have magical, healing properties on this particular night. It was also believed by some that the possession of fern seed would, by the power of the fairy queen, at the time of John the Baptist’s birth, grant them invisibility.

“It is to the dream of such an eve, when joyful revelry, good nature, love feelings, mystic superstitions, and poetic fancies, were all excited in combined activity, that Shakespeare likens this play. It has all the wild wantonness, the strange disconnected continuity, the causeless change of incident, the curious concurrence of contrarieties of a dream, intensified and made more wonderful as well beseems the visions of an eve so singular—in which human hearts and fairies’ feet are alive active, and extra-human vitality surcharges the whole state of social enjoyment. Therefore this drama is well designated A Midsummer Night’s Dream.”

Friedrich Nietzsche once wrote that “the trick is not to arrange a festival, but to find people who can enjoy it.” One wonders if we can find comparable enjoyment in a feast today as in the Midsummer Nights of the past.