How Orwell Foresaw the Disintegration of Our Language 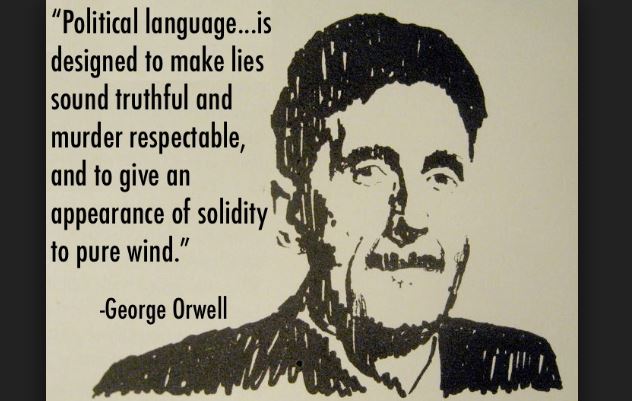 “In our time it is broadly true that political writing is bad writing.”

This is the takeaway quote from George Orwell’s essay “Politics and the English Language,” which has become popular as a guide for writers throughout the English-speaking world.  In the essay Orwell advocates a plainspoken, straightforward and no-nonsense writing style.  He heaps scorn on what he calls “meaningless words,” pretentious diction (including foreign-derived words and phrases), clichés, and vagueness of any kind.  He praises precision and simplicity.

Orwell saw the increasing sloppiness of language in his day (he wrote the essay 1946) as directly related to the hyper-politicized environment which was then taking shape.  Politics, after all, is “a mass of lies, evasions, folly, hatred and schizophrenia” and will naturally make use of language in order to deceive people.

Orwell’s essay has been highly influential.  The writer and historian Richard Pipes—best known as expert in the history of Communism—tells us that when he writes he strives for the “greatest economy of words,” chiseling his sentences until he has achieved maximum clarity and precision.  He calls this style of writing “classical” and contrasts it the “elaborate, rich” writing style of turn-of-the-century authors like Henry James.

At the same time, Orwell’s prescriptions have been widely questioned.  Is simplicity everything? Is it right to shun Latinate words and phrases? English, after all, is a hybrid of Anglo-Saxon and Latin and is richer for it.  Are words like “predict” or “extraneous,” which Orwell deems unnecessary accretions, really so bad?

While one can take Orwell’s strictures against Latinate vocabulary with a grain of salt, we can appreciate the sentiment behind them.  For Orwell, Latin-derived words have less concreteness and immediacy than Saxon ones. An over-reliance on such words can easily lead to a fuzzy vagueness.

And it’s here that Orwell put his finger on something deeper: our increasing tendency toward abstraction and over-sophistication in our thinking, turning the concrete into the metaphorical and thence into the unreal.

As Orwell predicted (or “foretold,” if you prefer) language is often used to dress up shabby or bankrupt thought—a tool of evasion rather than communication.  We lose contact with the real world and live within the confines our minds.  Effete over-refinement and airy abstractions rule the day.  Theory trumps reality.  This is particularly true of Marxist and Communist theory, as Orwell would no doubt have pointed out.

For Orwell, it was a vicious circle: “[Language] becomes ugly and inaccurate because our thoughts are foolish, but the slovenliness of our language makes it easier for us to have foolish thoughts.”

And so our language is dominated by technical jargon, “bureaucratese,” academic-speak, and politically correct circumlocutions.  Verbosity is the operating principle.  Not only is language used to inflate flimsy ideas, it is used as time-filling chatter to make the writer look busy and necessary.

Orwell’s rules for writing still ring out loud and clear, in their essence if not in their every detail.  Choose your words with care.  Say what you mean and mean what you say.  Be sure you have a clear meaning in mind before you write.  And remember that language is about communicating truth, not propping up your ideology or your ego.