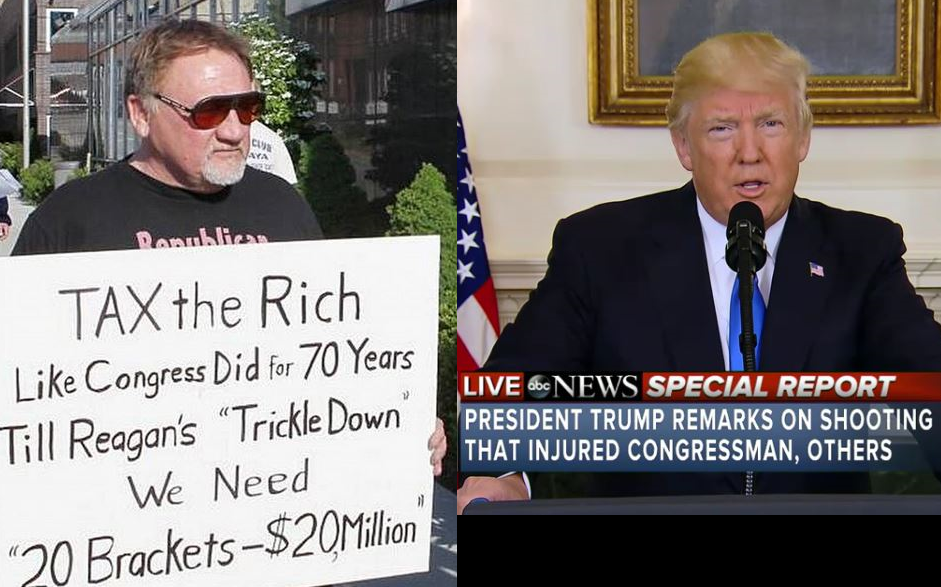 There is a Twitter profile for a James Hodgkinson from Belleville, Illinois. The account was created in January 2014.

The account was little used, but it does suggest the user was deeply interested in politics and was a fan of left-wing personalities such as Bernie Sanders and Ed Schultz. Here are Hodgkinson’s three tweets after joining Twitter in 2014.

A Facebook page created by a James T. Hodkinson paints a similar picture. The cover photo features a picture of Bernie Sanders. Posts show a hostility to President Donald Trump.

A March 22 post declares, “Trump is a Traitor. Trump Has Destroyed Our Democracy. It’s Time to Destroy Trump & Co.”

No one is responsible for this shooting except the person who pulled the trigger. But we’ve pointed out for a while that political rhetoric is getting a little out of hand.

Many people seem to possess the mindset that they are free to say anything about Donald Trump because … well … he’s Donald Trump.

If one wonders why the Secret Service never moved on Hodgkinson’s apparent Facebook threat “to destroy Trump and co.,” consider this: Thousands of people were openly calling for the president’s assassination on Twitter after he took office. And people really didn’t seem to mind.

I fear we’re going to see a lot more tragic events like this if political rhetoric continues to devolve. Over time, this type of rhetoric leads people to view and treat others as subhuman.

We cannot allow this to happen. As one writer on these pages has noted, the root of all evil is seeing others as collectively evil. History has shown where that path takes us.