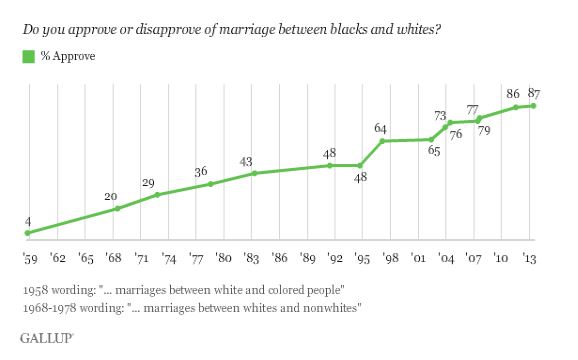 In case you missed it, Monday marked the 50-year anniversary of Loving v. Virginia, the case in which the Supreme Court struck down state laws that restricted interracial marriage.

There were many stories published yesterday on the historic case—including a fine piece written by David Boaz of the Cato Institute—but the most shocking piece of data I came across was a 2013 Gallup poll someone shared on Facebook.

The poll reveals the truly stunning shift in public opinion on the issue of interracial marriage. Via Gallup:

“Americans’ attitudes about interracial marriage have changed dramatically over the past 55 years, moving from the point in the late 1950s when disapproval was well over 90%, to the point today when approval is approaching 90%.”

Regarding the latter, I’d invite those who still do not approve of nonwhite people marrying white people to watch the video below. The clip is taken from an ABC News report that ran on June 12, 1967:

In some ways, I suspect that the interracial marriage issue is a tricky one for constitutionalists who believe strongly in federalism. After all, one might believe Virginia’s law was dumb or abhorrent but still be discomforted by the idea of the federal government imposing its will on an issue that was not clearly enumerated in the U.S. Constitution, and hence would not fall within the scope of federal power.

However, such logic shrinks when placed beside the testimony of Mildred Loving.

When one hears this sweet woman calmly describe being awakened by police with flashlights at 2 a.m. and then arrested—all for marrying the soft-spoken man beside her—constitutional bleats fall apart.

People of good conscience cannot help but feel there is something intrinsically wrong and pernicious in uniformed men dragging peaceful people out of their beds in the middle of the night and putting them in jail—just because a man married a woman he loved and had a family with her.

Does such logic help explain how gay marriage so quickly became the law of the land in the United States? I suspect it does.