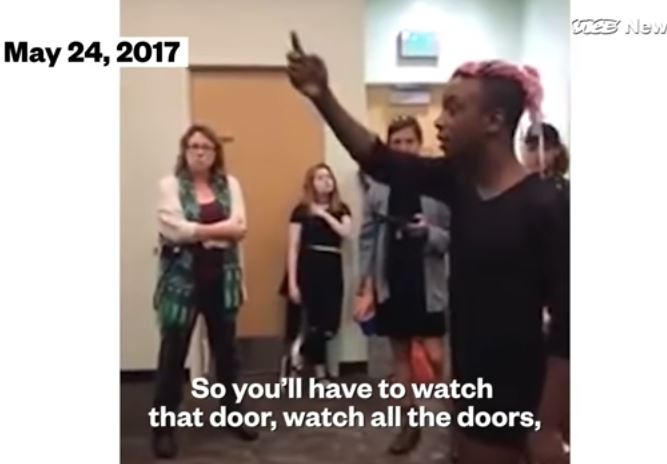 We’ve highlighted some of the troubling discord coming from Evergreen State College in Washington state, as well as the media’s apparent unwillingness to cover the strange saga. (The media might be coming around. The New York Times covered the college’s sad commencement on Friday.)

But even we were surprised by some of the revelations in a recently released video production by HBO and Vice News.

Hosted by correspondent Michael Moynihan, the 7-minute clip shows the sad state of free speech on college campuses (one Evergreen State student interviewed admitted she was afraid to share “a nuanced opinion”).

But the most stunning revelation comes from the president of Evergreen State, George Sumner Bridges. In the clip, Bridges (who recently was called a coward by one Evergreen State faculty member) admits that students demanded he use the restroom under an escort, apparently so he would not escape.

“It essentially sounded like you were being held hostage there,” Moynihan said. “If you were going to go to the bathroom you had to go with two escorts. Is that true?”

Watch the clip, starting at 3:22 (WARNING: The clip does contain profanity):

Bridges claims that he felt “very safe” under escort, adding that “I was going to go to the bathroom regardless, and they wanted to escort me.”

Moynihan then asks the obvious question.

“Why did they want to escort you to the bathroom.”

Bridges says “of course not” as if potty escorts are a typical, everyday occurrence at Evergreen State. Perhaps they are. But I suspect the reason Bridges did not ask the obvious question is the response would have been humiliating.

By asking students the obvious question—”Why do you want to escort me to the bathroom?”—he would have been told that students did not want him escaping. It could have even sparked a confrontation. By declining to ask the question, Bridges is able to cling to an illusion: that he is still in control.

I hate to break it to Dr. Bridges, but when your own students are publicly saying “No, f*ck you, George!” and attaching conditions to your restroom breaks, you’ve lost control of the situation.

College administrators take note. This is what happens when you fail to lead.