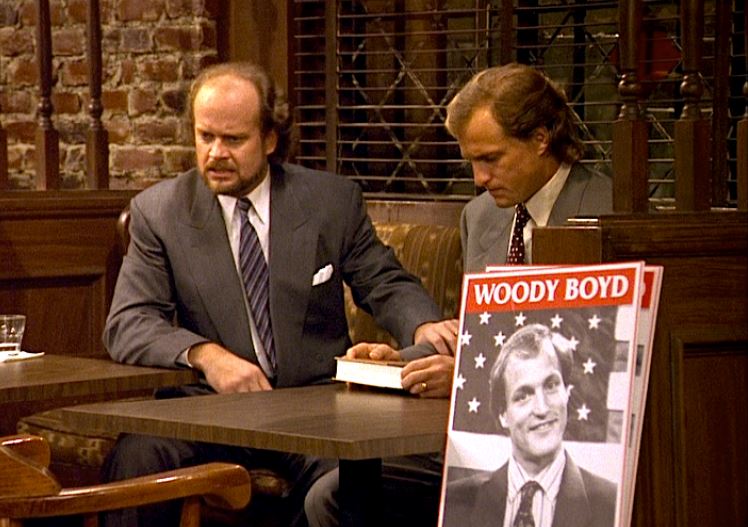 The television sitcom Cheers has always been one of my guilty pleasures.  Next to Seinfeld, I consider it the best sitcom of my lifetime.

After about a 20-year hiatus, I recently started watching Cheers reruns on Netflix. A few nights a week, on nights when my wife puts the kids to bed, I watch Sam Malone and company as I sip a cold beer, unwind, and wax nostalgically for that (seemingly) gentler, simpler time. It feels very warm.

It’s not just the show’s soothing and sentimental theme song (see below). It’s the little things. Nobody is on a phone. People talk to one other. The humor is utterly devoid of politics (though Cheers was viewed as progressive in its day). When the show does feature politics, it’s not bitter or preachy—just funny and smart.

A great example of this last point is a famous episode in which Woody—the bumbling farm boy-turned bartender—runs for city council of Boston.

The genesis of Woody’s campaign stems from Frasier’s observation that a local politician named Kevin Fogerty is an empty suit whose rhetoric consists of little more than patriotic platitudes (sound familiar?).

“There he goes, spouting a bunch of meaningless platitudes. Sure enough, the people are lapping it up like milk. Oh, the mentality of the voter in this country fascinates me. Someday, I ought to do a paper about it.”

When Sam takes issue with his point, Frasier asserts that American politics is so empty he could run a chimpanzee—or even Woody—and get 10 percent of the vote. Sam bets him $10 he can’t. The race is on.

Humble Woody, of course, doesn’t feel up to the task, noting he’s not very eloquent.

“Nothing to worry about, Woody. Just tell some more of those farm stories—people seem to love those,” says Frasier. “If that doesn’t work, just say the word ‘change’ about a hundred times.”

Woody takes Frasier’s advice. The result? He not only gets 10 percent of the vote, but wins outright after Fogerty is exposed in a sex scandal.

That democracy has certain weaknesses is not exactly a new or profound idea. Plato was horrified of rule by the people. Churchill observed that “the strongest argument against democracy is a five-minute discussion with the average voter.” The Founders, too, were suspicious of pure democracy; yet they believed a democratic republic could flourish under an enlightened, informed, and virtuous populace.

Those three adjectives–enlightened, informed, and virtuous–are not the first to leap to mind for most people when they describe modern America.

What Cheers shrewdly observed, however, is that both the right and the left are susceptible to these rhetorical games—the platitudes just sound a little different.

It’s hardly a secret that Donald Trump’s campaign was built largely on patriotic bluster (“Make America Great Again” sounds like a slightly clumsier version of Fogerty’s rhetoric). Yet it has been largely ignored that Barack Obama’s ’08 campaign was driven by a nebulous platitude.

If you think about it, Obama actually outdid Woody Boyd. He didn’t’ “just say the word ‘change’ about a hundred times’”; he made it the theme of his campaign.