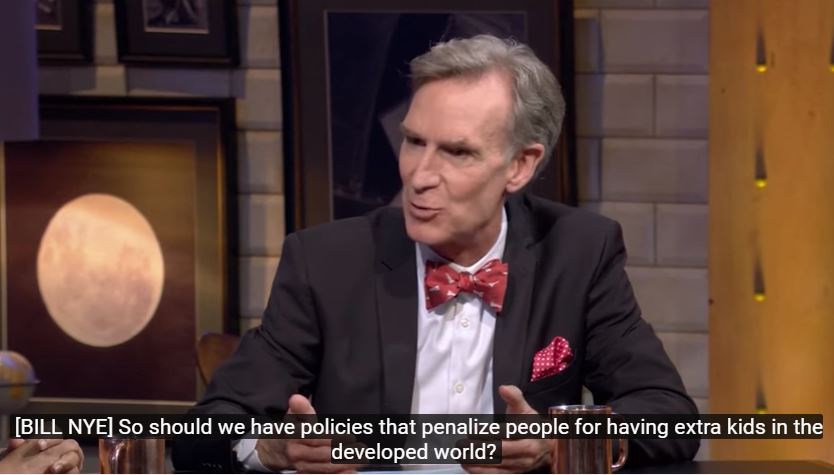 Bill Nye has been in the news a lot lately, mostly as the result of the hyperbolic predictions he is prone to making, many of which are backed up with very little science.

Whether it’s on gender identity, global warming, or philosophy, Nye can often be found serving up “a gold mine of fallacies, half-truths, vacuity, and plain historical ignorance,” as one writer put it.

One of Nye’s hobby horses is overpopulation. It’s a problem so severe that Nye has wondered aloud whether it was time to penalize people in developed nations who have “extra” kids. (The panelist on his show responded that “we should at least consider it,” to which Nye replied “Well, ‘at least consider it’ is like, ‘do it.’”)

There is nothing wrong, of course, in publicly musing about the merits of a particular policy, even one that penalizes people for procreating (something many would argue is a fundamental act of humans).

The problem is that Nye seems willfully ignorant (or stubbornly obtuse) on many of the issues he opines. (One wonders how familiar the Science Guy is with Thomas Malthus and Paul Ehrlich, social scientists who made similar population doomsday predictions that never materialized.)

Perhaps this should not be surprising. As others have noted, Nye is not a scientist; he is a popularist. Nye has received multiple honorary degrees in science, but the only degree he actually earned is a B.S. in mechanical engineering. He is primarily the product of good branding, effective TV presence, and clever marketing (he wears bowties and his last name rhymes with Science Guy).

In a recently released video, We the Internet TV set out to debunk (in rather hilarious fashion) some of Nye’s more wild assertions. It’s a pretty smart clip. Enjoy and decide for yourself if Nye’s scientific bona fides match his immense popular stature and cultural influence.