Behind Closed Doors: What the Piltdown Man Hoax from 1912 can Teach Science Today 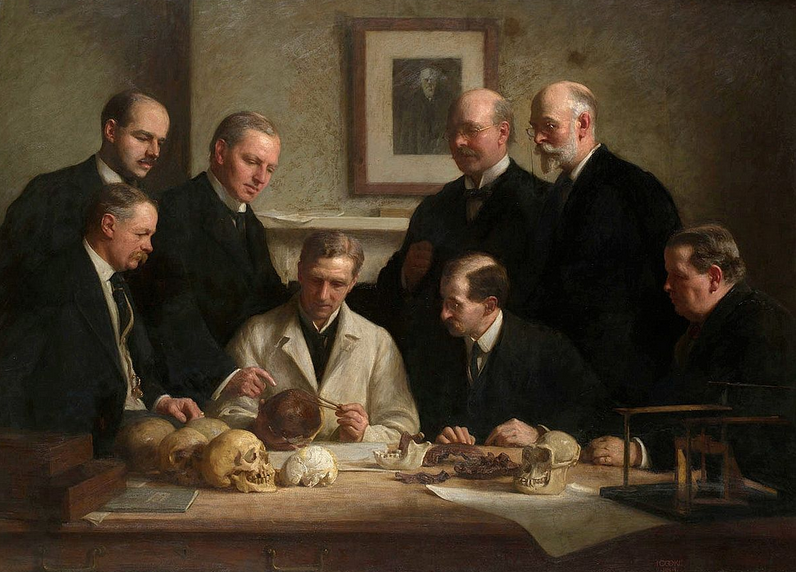 In 1912, Charles Dawson, an amateur archaeologist in England, claimed he’d made one of the most important fossil discoveries ever. Ultimately, however, his “Piltdown Man” proved to be a hoax. By cleverly pairing a human skull with an orangutan’s jaw – stained to match and give the appearance of age – a mysterious forger duped the scientific world.

In the decades between the find’s unearthing and the revelation it was fraudulent, people in the United States and around the world learned about Piltdown Man as a “missing link” connecting ape and man. Newspaper articles, scientific publications and museum exhibitions all presented Piltdown Man as a legitimate scientific discovery supporting a particular vision of human evolution.

Historians, science writers and others have investigated the Piltdown Man controversy over the years, shedding new light on the fraud. As we reconsider the nature of “facts,” “fake news” and knowledge production, it’s worthwhile to revisit the Piltdown Man episode.

At issue was not just the deliberate hoax, but also the incomplete flow of information about the purported human ancestor. Soon after the discovery, access to the original materials in England was cut off by a few gatekeepers. Science is suffocated when researchers are unable to reliably corroborate claims made by others. The same issues arise today, with the research community grappling with what’s been called a reproducibility crisis; scientists need access to evidence and data in order to replicate (or not) research results. The Piltdown Man controversy lends support to the modern open science movement, with its call for transparency at every step of the scientific process.

Piltdown Man believers kept tight control over who could get an up-close look at the fossils. Arthur Keith is pictured in the white coat, Charles Dawson over his left shoulder. John Cooke

Experts immediately cited the discovery of a large human-like cranium with a primitive-looking, ape-like jaw as a major breakthrough. Influential anatomists such as Sir Arthur Keith hailed Piltdown Man as authentic. The popular press on both sides of the Atlantic described prehistoric archaeology as a dramatic hunt for a missing link and came to embrace Piltdown Man within an oversimplified framework of human evolution.

But there were some scientists – notably British Museum curator Reginald A. Smith – who were skeptical from the outset. Doubters noted the major find was attributed to a previously little-known archaeologist.

Curators in the United States impatiently hoped to learn more. But transatlantic requests were denied by their counterparts in Britain who controlled access to the cranium and jaw, moving the bones to a secure vault at the Museum of Natural History in London. Rumors swirled.

“Regrettably… the specimen was not yet available for examination by outsiders, and so no original opinion can be given concerning its status. It represents doubtless one of the most interesting finds relating to man’s antiquity, though seemingly the last word had not yet been said as to its date and especially as to the physical characteristics of the being it stands for.”

Early in the 20th century, provocative claims about discoveries commonly circulated through letters, rumors and splashy newspaper articles suggesting major new finds. American museums were simultaneously intrigued and frustrated by word of significant finds like Piltdown Man. Some claims proved to be genuine, while many others were found to be falsified or misleading. With limited information, it was especially difficult to determine the validity of claims made by scientists abroad.

News about major discoveries might change planned exhibitions about human evolution or prehistory at museums in New York or Chicago, or influence what students were taught about human history. Uncertainty plagued museums in this regard, as their scientists tried to view skeletons firsthand on visits to European museums and to secure good casts or copies for their own collections. Even amid growing doubts, a major exhibition in San Diego that opened in 1915 prominently featured a Piltdown Man sculpture.

This lack of transparency resulted in an absence of accurate information in the scientific community.

It ultimately took until the later decades of the 20th century for the Piltdown bones to be fully discredited. The hoax was likely created by Dawson himself, though who exactly concocted the scam is still debated – “Sherlock Holmes” author Arthur Conan Doyle’s name has even been mentioned as a possible perpetrator.

As Berkeley anthropologist Sherwood Washburn offered in a letter, “My opinion is that if more people had seen the originals sooner the fake would have been recognized.” Confusion had arisen because so few scholars were granted access to the original evidence.

Part of what finally put Piltdown Man to rest was the nature of new discoveries emerging. They informed researchers’ developing understanding of the human past and began turning much scientific attention away from Europe toward Asia and Africa.

While it is impossible to know with certainty, the Piltdown Man episode likely slowed scientific progress in the global search for human ancestors. What is clear is that the claims worked to muddle popular knowledge about human evolution.

The unknown forger behind Piltdown Man intentionally misled the world about human evolution. The false claims rippled through the news media and museum exhibitions. Without access to reliable sources, in this case the original bones, the fraudulent story of Piltdown Man spread like a slowly building wildfire.

The Piltdown Man controversy hints at the dangers of drawing conclusions based on limited or emerging information, for both the public and scientists. In some ways, the whole episode foreshadowed threats we face now from fake news and the spread of misinformation about science and many other topics. It is hard to get to the truth – whether about a news story or scientific theory – without access to the evidence supporting it.

Certainly new information flows much more rapidly today – thanks to the internet and social media – potentially a partial corrective to the problems connected to misleading claims. However, scientists and others still need access to accurate and reliable information from original sources. With the Piltdown Man remains locked away in a secure museum vault, speculation and misinformation flourished.

Support is now building for an open access research model: When possible and appropriate, original materials, data and preliminary findings should be made available to others in the field. Scientists also work to balance how quickly they publish new research: It takes time to do careful work, but keeping finds hidden away for too long also impedes progress and understanding.

Excavations continue in the hobbit cave in Indonesia. Bryn Pinzgauer, CC BY

Consider a 2003 find from Indonesia that was as shocking as the discovery of Piltdown Man: a nearly complete female skeleton researchers suggested was from a tiny human ancestor they called Homo floresiensis (commonly nicknamed “hobbit”). Media speculation ran wild early on about this new species added to our family tree, but paleoanthropology has evolved a great deal since Piltdown Man.

Scientists from several different groups worked to understand the discovery – seeking related finds and going back to the original fossils to systematically assess the claim. Soon additional detailed scientific publications began to emerge, allowing the scientific community to continue to add to the evidence and better scrutinize the discovery. To date, the teeth of at many as 12 individuals have been found.