What Deep Throat Could Teach Us About Fake News 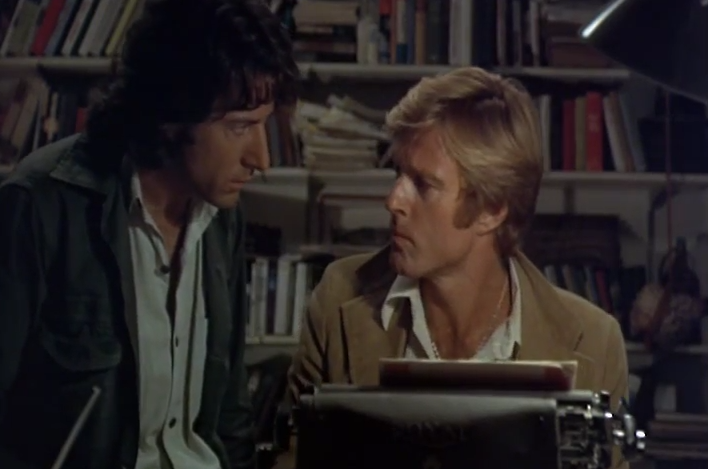 Since the election, the reading public has been tortured with the cries from both right and the left about “fake news.” And even though Google just updated its fact-checking tools, the problem doesn’t seem to be going away anytime soon.

But let’s face it. We could have prevented this. If reporters and readers alike stopped relying on the internet for all their information, we wouldn’t have to worry about fake news.

I only recently realized how much the internet dilutes our ability to discern real from fake when I visited the garage where Washington Post reporter Bob Woodward interviewed “Deep Throat,” (later revealed as to be a senior FBI official named Mark Felt) during the Watergate investigation. Situated across the river from Washington DC, the garage is still very much an artifact of the 1970s. It’s dirty, lit by fluorescent lights, and I couldn’t get a Wi-Fi signal in there. A Washington Post article taped to a concrete column next to the parking spot where Woodward and Felt met gives the spot a bit of authentic grit.

Until it gets knocked down this summer, the Deep Throat garage stands as a monument to a style of reporting that died with the advent of the internet. In his 2005 book on Felt, The Secret Man, Woodward explains how hard it was to arrange meetings with the FBI official. If Woodward wanted to talk, he had to leave a plant with a red flag in it on his back porch, and Felt would know. If Felt had something to say, he would use his influence in the intelligence community to circle a designated ad in Woodward’s copy of the New York Times. They met in this manner for months with utmost secrecy.

But although Felt was essential to providing the information that exposed corruption in the Nixon administration, he is not the real hero of the Watergate story. Without Woodward’s and his partner at the Post, Carl Bernstein’s hours of eye-numbing research, the duo would not have been able to write such a powerful story. Both were dedicated reporters who collected all of their information by calling thousands of people as well as trawling through a bay of archives before publishing their stories.

The 1976 movie about the investigation, “All The President’s Men,” dramatizes this dogged pursuit of the truth particularly well, showing, for example, Woodward and Bernstein going to the Library of Congress to research book check-out records of White House officials suspected of involvement in the Watergate scandal.

Without the benefit of the internet, this is a gargantuan task. The Library of Congress did not even begin to digitize its collections until 1990, so forget about an online database where the duo could easily find what had been checked out recently. Instead, Woodward and Bernstein had to rifle through thousands of three-by-five note cards in the Library, a task that takes all day.

In the movie, the audience sees just how hopeless the project seemed. As Woodward and Bernstein conduct their search in the library’s main reading room, the camera slowly pans out on the two until they become tiny ants sitting at what looks like a dollhouse desk in the gigantic library of Congress. At the end of the day, they’ve read over tens of thousands of cards, not knowing if any of them contained useful information.

Today that research would be over in a couple of clicks. But Woodward and Bernstein would have missed something. This is something contemporary reporters should remember. Consider the recent Trump “scandals”—like the rumor that National Security Advisor Sebastian Gorka is a Nazi, which involved many reporters highlighting small nuggets of information they found on the internet, while glossing over the bigger (true) story.

This is not a new problem. Since information has become easy to find, reporters (and readers too) have lost the incentive to meticulously check every fact for accuracy. Instead, we rely on the group think that arises on social media — and that’s how fake news became a national issue.

When major media outlets figured out it was cheaper to rely on tweets and official press releases for stories, they stopped sending reporters into the field to break foreign political news. The Obama administration quickly picked up on this deficiency and spun the gullibility and laziness of the media to sell things to the American public – destructive things, like the 2013 Iran deal.

“All these newspapers used to have foreign bureaus,” Foreign Policy Advisor Ben Rhodes told the New York Times. “Now they don’t. They call us to explain to them what’s happening in Moscow and Cairo. Most of the outlets are reporting on world events from Washington. The average reporter we talk to is 27 years old, and their only reporting experience consists of being around political campaigns. That’s a sea change. They literally know nothing.”

Rhodes’ strategy turned out to be a pyrrhic victory, as we saw in the 2016 election. Once Americans stopped trusting the media on foreign policy, reporters found it hard to maintain things like the prepackaged Hillary Clinton-victory narrative. The credibility vacuum let in trolls on both the right and left who seized the opportunity to publish truly fake stories that played upon people’s worst fears and suspicions, tearing apart an already strained country.

It’s the only way to stop the fake news epidemic.

This piece has been republished with permission from Acculturated.