Trump’s Tax Plan Is Brilliant Politics and Even Better Economics

Donald Trump’s tax plan seems to mark a new chapter in his presidency, from floundering around with strange and sometimes scary policies (bombings, border closings, saber rattling) to focusing on what actually matters and what can actually make the difference for the American people and the American economy.

Under Trump’s plan, taxes on corporate profits go from 35% to 15%. They should be zero (like the Bahamas), but this is a good start. Taxes on capital gains go from 23.8% to 20%. Again, it should be zero (as with New Zealand), but it is a start. Rates for all individuals are lowered to three: 10%, 25%, and 35%. The standard deduction for individuals is doubled (politically brilliant). The estate tax and the alternative minimum tax is gone. Popular deductions for charitable giving and mortgage interest are preserved. The hare-brained idea of a “border adjustment tax” is toast.

All of this is wonderful, but the shining light of this plan is the dramatic reduction in taxes on corporate profits. The economics of this are based on a simple but profoundly true insight. Economic growth is the key to a good society. This is where good jobs come from. This is how technology improves. This is what gives everyone a brighter outlook on life. If you can imagine that your tomorrow will be more prosperous and flourishing than today, your life seems to be on track.

Where does economic growth come from? For decades dating back perhaps a hundred-plus years, people imagined that it could come from government programs and policy manipulation. Surely there are some levers somewhere in the center of power that can cause this thing we call economic growth. We just need solid experts with power, resources, and intelligence to manage the system.

This turns out to be entirely wrong. It hasn’t worked. Since 2008, government has tried to mastermind an economic recovery. It has floundered. We are coming up on a full decade of this nonsense with economic growth barely crawling along. We are surviving, not thriving, and income growth, capital formation, and entrepreneurial opportunity restricted and punished at every turn.

The Trump tax plan is rooted in a much better idea. Economic growth must come from the private sector. It must come from investment in private capital. The owners of this capital who are doing well and earn profits should be allowed to keep them and invest them. This creates new job opportunities. It allows for more complex production strategies. It expands the division of labor.

The crucial institution here is capital. Sorry, anti-capitalists. It’s just true. Capital can be defined as the produced goods for production, not consumption. It is making things for the purpose of making other things. Think about it. Without capital, you can still have markets, creativity, hard work, enterprise. But so long as you have an absence of capital, you are forever floundering around just working to make and sell things for consumption. This is called living hand to mouth.

And this is precisely what American policy has done. The rest of the world has been wising up about this, reducing taxes on capital for the last 15 years. But the US has languished in the mythology of the past, regarding capital not as a font of prosperity but rather a fund of stagnant resources to be pillaged by planners in government. It is not surprising that this strategy results in slow growth and even permanent recession. 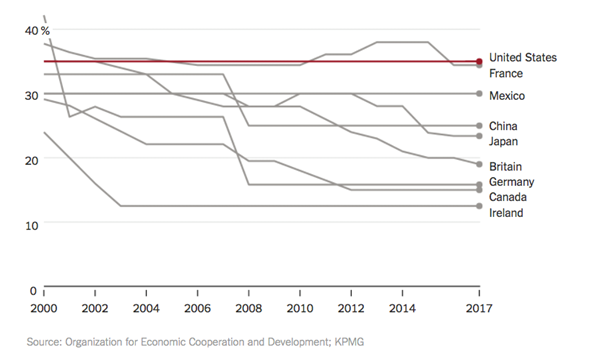 What This Can Do for Growth

I have no regression to present to you but this much I can say out of experience and intuition. If this tax plan goes through, the entire class of entrepreneurs, investors, and merchants will receiving a loud signal: this country is safe for you to realize your dreams and make the dreams of others come true.

It wouldn’t surprise me to see GDP growth go from an anemic 1-2% to reach 4% and higher in one year. There is so much pent-up energy in this country. This tax cut will unleash it. And think what it means for the next recession or financial crisis. It prepares the entire country to weather such an event better than we otherwise would.

The beauty of unleashing the power of private capital is that the brilliant results will always be surprising. We don’t know what kind of experimentation in investment and business expansion this will create. This is the nature of a capitalist economy rooted in the freedom of enterprise. It defies our every expectation. No model can forecast with precision the range of results here. We only know that good things will come.

If you want to cut the deficit, there is only one way: cut spending.

Now, of course, the opponents will talk of the deficit and the national debt. What about the lost revenue? The problem is that every revenue forecast is based on a static model. But an economy rooted in capital formation is not a static one. It is entirely possible that new profits and business expansion will produce even more revenue, even if it is taxed at a lower rate.

If you want to cut the deficit, there is only one way: cut spending. I see no evidence that either party wants to do this. Too bad. This should change. But it is both economically stupid and morally unsound to attempt to balance the budget on the backs of taxpayers. Letting people keep more of what they earn is the right thing to do, regardless of government’s fiscal problems.

In the meantime, these pious incantations of the word “deficit, deficit, deficit,” should be seen for what they are: excuses to continue to loot people of their just earnings.

The Politics of It

Already the opponents of this plan are kvetching in the predictable way. This is a tax cut for the rich! Well, yes, and that’s good. Rich capitalists  – sorry for yet another hard truth – are society’s benefactors.

But you know why this line of attack isn’t going to work this time? Take a look at the standard deduction change. It is doubled. Not a single middle-class taxpayer is unaware of what this means. This is because they are profoundly aware of how the tax system works. If you take the standard deduction from $6,200 to $15,000, that means people are going to keep far more of their own money. There is not a single taxpayer in this country who will not welcome that.

This is why it strikes me as crazy for Democrats to inveigh against this plan. Doing so only cements their reputation as the party of pillage. Do they really want the United States to be outcompeted by every other nation in the OECD? What they should do is rally behind this, forgetting all the ridiculous pieties about the deficit and the rich and so on. Do they favor the interests of the American people are not?

It’s also fantastic politics to retain the deductions for charitable giving and mortgage interest. These are popular for a reason. They are two of the only ways that average people can save on their tax bill. It always pained me when the GOP would propose a “flat tax” that eliminated these provisions. People are very aware: taking away an existing tax break is a terrible foreshadowing of bad things to come. So this Trump plan dispenses with all that. Good.

As for compliance costs of the current system, the elimination of the Alternative Minimum Tax will do worlds of good.

What I love most about this plan is its real-world economic foundation. It embraces a truth that so many want to avoid. If you want jobs, rising wages, and economic growth, you have to stop the war on capital. You have to go the other way. You need to celebrate capital and allow rewards to flow to those who are driving forward economic progress.

It’s a simple but brilliant point. Finally, we’ve got a tax proposal that embraces it.