When I graduated from high school a number of years ago, there were a few – but only a few – rumblings concerning the high cost of college and the need for a more sensible, cost-effective path to a career, such as that offered by apprenticeship. I was curious about this alternative, but found it practically impossible to pursue because drinking the must-go-to-college Kool-Aid was the thing to do.

Times have certainly changed. Today, apprenticeship and vocational forms of higher education are viewed in a much more favorable light.

Yet despite this surge in interest, vocational education still endures a fair amount of skepticism and prejudice, as witnessed by one teacher in a column for The Guardian entitled, “I’m tired of justifying the value of vocational subjects.”

According to the teacher, many of her colleagues give lip service to the idea of vocational education but then turn around and make “derogatory comments” about it, solidifying the stereotype that those who pursue such a path are the dumb students.

As the article goes on to explain, nothing could be further from the truth:

“Traditionally, vocational subjects have attracted students considered to be of low ability, or who are looking for an easy qualification. But my students, past and present, are passionate, committed, and deserve every chance to be successful in whichever subjects they choose. Students who take vocational subjects have a clear idea of the path they wish to take. They know what they want to do once they leave the comfort of compulsory education.”

In other words, students who pursue vocational education often demonstrate initiative and have the grit to swim upstream and buck the smooth, easy path chosen by the rank and file.

Oddly enough, it is those very same attitudes that employers are looking for. They want young people who can take the lead and pursue a goal even in the face of opposition and challenge. They want individuals who solve problems and are discontent to sit back on their heels and plod along in their work.

In response to these desires, the education system pushes more students toward college, assuring them that they must keep up with the Joneses and fork out money for bigger and better colleges if they want to be attractive to employers and realize the American dream.

Sadly, as a recent study in Science Magazine demonstrates, that American dream isn’t what it once was. In fact, today’s young people are less likely to go above and beyond the earnings and success that their parents and grandparents achieved, as shown in the chart below. 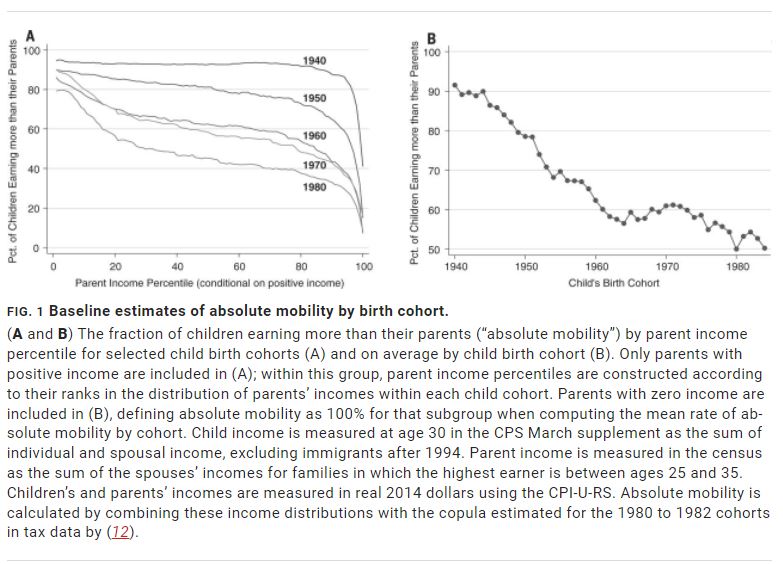 Is it possible that the inability of children to exceed the success of their parents is partially due to the fact that we’ve done our best to discourage vocational education? Would we inspire greater interest and ambition in the next generation if we didn’t imply that every student take the college path?