The Berkeley Battles Are a Sign of Things to Come 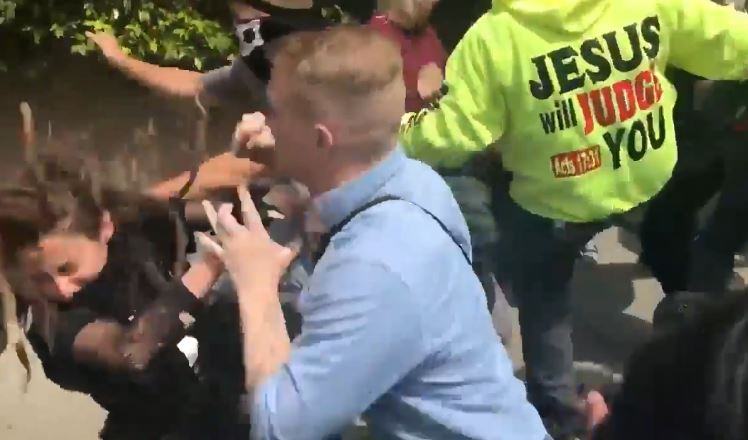 Just how close are we to repeating the political violence of interwar Germany? How bad is it, and how bad can it get?

Arrayed on the right were members of the Alt-Right, Oathkeepers, Proud Boys, and non-affiliated Trump supporters, and the left was led by Antifa (Anti-Fascist Action) and BAMN (“By Any Means Necessary”).

At one point, the left-radicals ill-advisedly threw a smoke bomb while they themselves were standing downwind. The smoke wafted back in their faces causing them to flee. Today, right-populists are crowing online about having “won the Battle of Berkeley,” because, after a concerted charge, they managed to seize and hold a major downtown street.

Berkeley has become a favorite battleground for these budding political street warriors. Two months ago, a scheduled speech at UC Berkeley by Alt-Right darling Milo Yiannopolis speech was canceled due to riots, arson, and assaults on Milo-supporters. Weeks later, a “March 4 Trump” was held off-campus in Berkeley, and this too was attacked by militant leftists, using metal pipes, baseball bats, two-by-fours, and bricks.

Yesterday, the occasion was another pro-Trump rally in Berkeley celebrating “Patriot’s Day.” As usual, it was the leftists who were the main instigators. That doesn’t alter the fact that these gradually-escalating street conflicts signal a two-pronged threat to liberty.

The brawls seem like a half-hearted, semi-play-acting reenactment of the street fights of Germany’s Spartacist uprising of 1919. The “Spartacists” were Marxist insurgents who sought to overthrow the new Weimar government, take power themselves, and expropriate the bourgeoisie. The government, which itself was made up of milder Marxists, relied on nationalist militias called Freikorps to crush the uprising. Then, as yesterday, nationalists trounced communists in the streets. Yet this did not yield a happy ending.

As Ludwig von Mises points out in Omnipotent Government, when the Freikorps first arose, they were modeled after the armed bands of communist revolutionaries that they would later suppress.

“The November Revolution brought a resurgence of a phenomenon that had long before disappeared from German history. Military adventurers formed armed bands or Freikorps and acted on their own behalf. The communist revolutionaries had inaugurated this method, but soon the nationalists adopted and perfected it. Dismissed officers of the old army called together demobilized soldiers and maladjusted boys and offered their protection to the peasants menaced by raids of starving townsfolk and to the population of the eastern frontiers suffering from Polish and Lithuanian guerrilla invasions. The landlords and the farmers provided them in return for their services with food and shelter.”

The Freikorps, like today’s budding right-wing street militias, arose in response to leftist aggression. That didn’t make them any less dangerous. Mises continued:

“When the condition which had made their interference appear useful changed these gangs began to blackmail and to extort money from landowners, businessmen, and other wealthy people. They became a public calamity. The government did not dare to dissolve them. Some of the bands had fought bravely against the communists. Others had successfully defended the eastern provinces against the Poles and Lithuanians. They boasted of these achievements, and the nationalist youth did not conceal their sympathy for them.”

The Road to Nuremberg

These Freikorps were then integrated into the army, and the problem of rival armed bands subsided for a while, although it did not disappear. As Mises wrote:

“War and civil war, and the revolutionary mentality of the Marxians and of the nationalists, had created such a spirit of brutality that the political parties gave their organizations a military character. Both the nationalist Right and the Marxian Left had their armed forces. These party troops were, of course, entirely different “from the free corps formed by nationalist hotspurs and by communist radicals. Their members were people who had their regular jobs and were busy from Monday to Saturday noon. On weekends they would don their uniforms and parade with brass bands, flags, and often with their firearms. They were proud of their membership in these associations but they were not eager to fight; they were not animated by a spirit of aggression. Their existence, their parades, their boasting, and the challenging speeches of their chiefs were a nuisance but not a serious menace to domestic peace.

After the failure of the revolutionary attempts of Kapp in March, 1920, that of Hitler and Ludendorff in November, 1923, and of various communist uprisings, of which the most important was the Holz riot in March, 1921, Germany was on the way back to normal conditions. The free corps and the communist gangs began slowly to disappear from the political stage. They still waged some guerrilla warfare with each other and against the police. But these fights degenerated more and more into gangsterism and rowdyism. Such riots and the plots of a few adventurers could not endanger the stability of the social order.” [Emphasis added.]

But then, feeling threatened by the continued existence and activity of nationalist armed bands, the embattled socialist government created a new armed force consisting of loyal Marxists. As Mises explains, this caused many in the public to throw their support behind Adolf Hitler’s personal militia, the Nazi Storm Troopers.

“But these Storm Troopers were very different from the other armed party forces both of the Left and of the Right. Their members were not elderly men who had fought in the first World War and who now were eager to hold their jobs in order to support their families. The Nazi Storm Troopers were, as the free corps had been, jobless boys who made a living from their fighting. They were available at every hour of every day, not merely on weekends and holidays. It was doubtful whether the party forces—either of “the Left or the Right—would be ready to fight when seriously attacked. It was certain that they would never be ready to wage a campaign of aggression. But Hitler’s troops were pugnacious; they were professional brawlers. They would have fought for their Führer in a bloody civil war if the opponents of Nazism had not yielded without resistance in 1933.” [Emphasis added.]

And the rest is History Channel programming. Once in power, the nationalist brawlers proved to be just as deadly foes to liberty as the communists they trounced in the streets and drove from power.

As the late, great Will Grigg wrote:

Unlike the wholesale violence that our country saw in the late 1960s and early 1970s, contemporary street-level political conflict is heavy on posturing and pretense and light on actual bloodshed – but it does whet degenerate appetites that will grow to dangerous proportions as times get leaner and meaner.

Thankfully, we are also nowhere near the level of political street violence that characterized Weimar Germany. But these things have a way of escalating. Just as the right-populists were not content to accept their “defeat” in the First Battle of Berkeley, the left-radicals will not just lick their wounds after the Third Battle of Berkeley. The right is reporting chatter among the left of bringing firearms next time. Such militarization will only breed more polarization and radicalization on the left and the right, both which are driven by a desire to wield state power. And it will provide the police state with a welcome excuse to further assault our already-decimated liberties.

EDIT (4/18/17): Some of the interesting responses to this article made me realize one of the key problems. Too many people are more anti-leftists and anti-communists than they are anti-leftism and anti-communism. For them, it’s more about the enemy tribes that hold pernicious ideas than the pernicious ideas themselves. This breeds a tribal warfare mentality that will only make things worse.

Dan Sanchez is Managing Editor of FEE.org. His writings are collected at DanSanchez.me. This article was originally published on FEE.org. Read the original article.