Technology Addiction and the Gollumizing of Our Culture 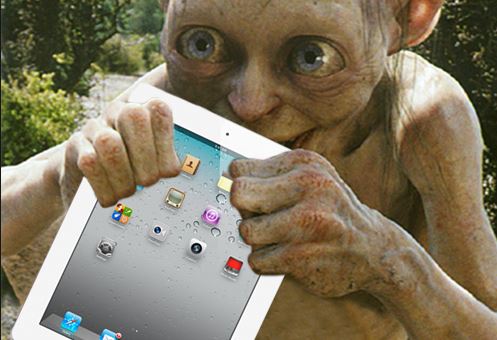 Is technology liberating? Does science-driven “progress” make us happier? Not so, says social psychologist, Adam Alter, in his new book, Irresistible: The Rise of Addictive Technology and the Business of Keeping Us Hooked. “In the past, we thought of addiction as mostly related to chemical substances: heroin, cocaine, nicotine,” says Dr. Alter, an associate professor at the Stern School of Business at New York University, in a recent interview with the New York Times.

“Today, we have this phenomenon of behavioral addictions where, one tech industry leader told me, people are spending nearly three hours a day tethered to their cellphones. Where teenage boys sometimes spend weeks alone in their rooms playing video games. Where Snapchat will boast that its youthful users open their app more than 18 times a day.”

Whereas a 2011 study found that 41 per cent of Americans suffered from a behavioral addiction of some sort, an horrific enough figure in itself, Professor Alter believes that things are now much worse. “That number is sure to have risen with the adoption of newer more addictive social networking platforms, tablets and smartphones,” he says. A recent survey showed that 60 per cent of adults keep their cellphones next to them when they sleep (teddy bears for techno-addicts!), and another survey revealed that almost half of American adults check their e-mails during the night and almost 40 per cent “routinely” check them at the dinner table.

Nor is the problem of techno-addiction a peculiarly American problem. In China and South Korea there are plans to pass what have been called “Cinderella laws” to protect children from playing certain video games after midnight.

Connected (pun intended!) to the rise of techno-addiction is the rise of loneliness. A recent article in the Boston Globe explored the growing phenomenon of loneliness, especially among males, and Surgeon General Vivek Murthy warned last year that Americans are “facing an epidemic of loneliness and social isolation.”

Meanwhile, in the United Kingdom, the problem of loneliness has become so endemic that, in 2011, several organizations combined their resources to launch the Campaign to End Loneliness. Surveys have shown that half of Londoners report being lonely. In an interview with The Atlantic, John Cacioppo, a psychologist at the University of Chicago who has published a book on loneliness, cites recent research that loneliness has increased significantly over the past 20 years.

Apart from the obvious psychological dangers associated with loneliness, there is growing evidence of the physiological dangers attached to it. A lack of what is now called “social connections” but used to be called the love between neighbors and friends can lead to inflammation and changes to the immune system, the harmful consequences of which means that lonely people are far more likely to die prematurely. New research shows that loneliness is considerably more dangerous and potentially deadly than obesity, and about as deadly and dangerous as smoking.

It would of course be a little simplistic to blame the rise in levels of loneliness entirely on the rise in levels of techno-addiction. And yet there is no denying that addiction isolates the addict from his neighbours, the addict’s obsession with the thing to which he’s addicted hampering and harming his ability to relate to others. Addicts, like Gollum in The Lord of the Rings, are so obsessed with the object of their addiction that they shrivel psychologically into mere shadows of whom they are meant to be. Such people find it difficult to form friendships and relationships, dooming themselves to an isolated existence in the wreckage of themselves. We can call such a phenomenon many things, but it is plainly absurd to see addiction as “liberating” or the rise in levels of loneliness as a mark of anything that can meaningfully be called “progress”.