How J.R.R. Tolkien Responded to News of the Atomic Bomb 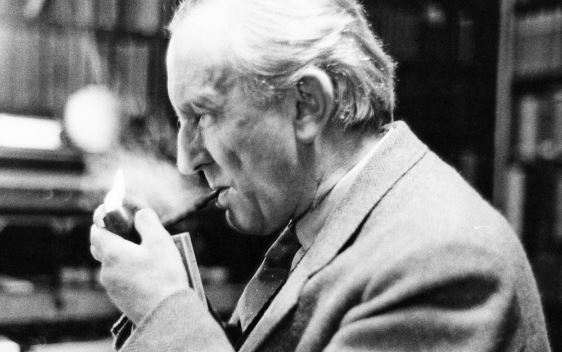 On Aug. 9, 1945, the day the U.S. dropped a second atomic bomb—this one on the Japanese city of Nagasaki—J.R.R. Tolkien penned a letter to his son, Christopher Tolkien. Here is what he wrote:

“The news today about ‘Atomic bombs’ is so horrifying one is stunned. The utter folly of these lunatic physicists to consent to do such work for war-purposes: calmly plotting the destruction of the world! Such explosives in men’s hands, while their moral and intellectual status is declining, is about as useful as giving out firearms to all inmates of a gaol and then saying that you hope ‘this will ensure peace’. But one good thing may arise out of it, I suppose, if the write-ups are not overheated: Japan ought to cave in. Well we’re in God’s hands. But He does not look kindly on Babel-builders.”

First, it’s worth observing, as we have before, that many of the most vociferous objections to the dropping of the atomic bomb initially came from conservative voices, among them William F. Buckley, Russell Kirk, Medford Evans, Richard Weaver.

What strikes me is that Tolkien’s immediate reaction was not to rejoice that the bloody “War of Machines,” as he often referred to it, was finally over; he expressed horror that man had created such an instrument.

Tolkien’s fear—not an unreasonable one, in my opinion—seems to stem from the idea that humans could not contain such technology, that it would one day fall into evil or imprudent hands, which might very well spell the doom of mankind.

One cannot help but wonder if Tolkien would be surprised that such potent power would one day be wielded by a man such as Kim Jong-un, a petty despot whose ruthlessness seems surpassed only by his lunacy.

One also wonders if Tolkien would be surprised to learn that, in the year 2018, humans had not only not destroyed themselves, but not a single nuclear weapon had been dropped on a population since the day he wrote that letter to his son.

The reason for this, of course, is that we have been modestly successful in preventing the proliferation of nuclear weapons, particularly in nations that have the technology to launch a missile across an ocean. That resolve may soon be tested, and at a time when our nation (and much of the world) seems bitterly divided.

To be sure, the U.S. has options short of a preemptive attack that could discourage the Kim regime from further pursuing its nuclear ballistic missile program.

But I must admit that I’ve long believed that it is a question of when, not if, a third nuclear bomb will be dropped in warfare. Like Tolkien, I harbor grave doubts that such power can indefinitely be contained. I pray I am wrong.