Has America’s Middle Class Been Fleeced? 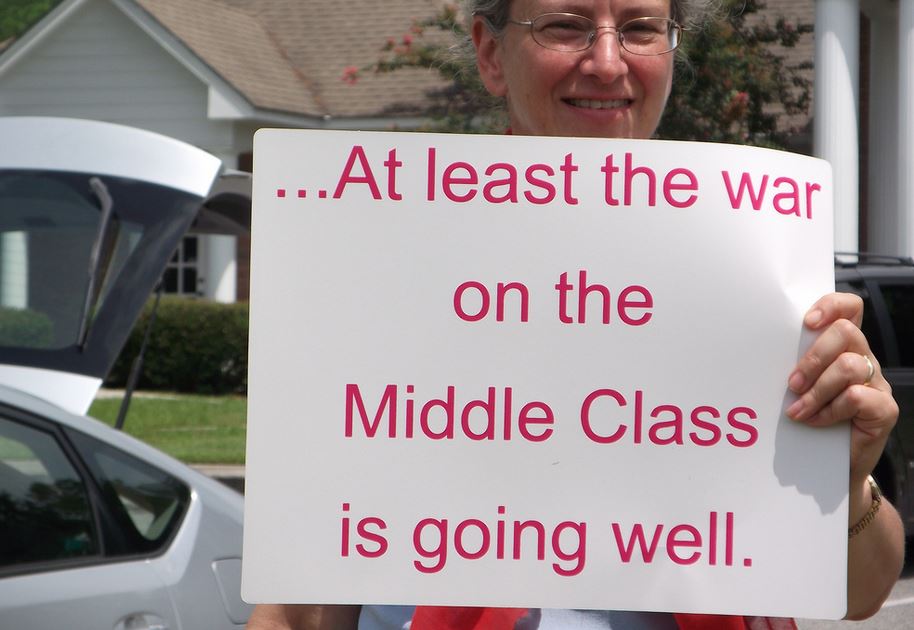 Noah Smith, writing in Bloomberg, says that middle class America has indeed been fleeced by our national economic policies. We agree. But which policies have been responsible?

Smith mentions and immediately dismisses trade, immigration, economic regulation, and welfare policies. The real villain in his view is an alleged turn toward managing the economy on free market lines: “Your prosperity was taken by the very people who promised to ensure and enhance it. The decades from 1980 through 2008 were the age of neoliberalism — the ideology of the free market.”

This is a story that we hear more and more. Neoliberals, the favorite new epithet on the left for free market exponents, have ruled the roost for decades (note how the Obama administration is simply ignored in the preceding quote), and have left the poor and middle class far worse off than they were.

The truth is that the Bush-Clinton-Bush-Obama era had much in common, and it was not free market principles. It was an era of unrestrained crony capitalism, in which special interests formed stronger and stronger alliances with government in order to secure economic monopolies and other privileges.

It was also, not coincidentally, an era of repeated boom and bust, as the Federal Reserve and other central banks created immense amounts of new money to keep the crony capitalist game going. The Fed did not create all the new money to help the poor and the middle class. They did it primarily to support the government debt machine, which they worried was on the verge of collapse in 2008. The result is that government debt has now doubled in the few years since then.

Can Noah Smith, an intelligent writer and economics professor, really believe that free market principles prevailed in recent decades? The only possible excuse for this is that crony capitalists tend to hide their actions behind free market slogans. This is genuinely confusing.

Today, for example, we are told by most commentators that we have a choice between “free trade” and “protectionism,” and the free trade position is represented by people like Hillary Clinton and Hank Paulson, the Bush Treasury Secretary during the last Crash who rescued his old firm, Goldman Sachs, and coincidentally the value of his shares in that firm, and who more recently supported Hillary for president. To describe these people as supporters of “ free trade” is a joke. They are supporters of “ crony trade” in which so-called free trade agreements are actually written by special interests in order to escape the pressures of a genuinely free market.

And does Smith really believe that giving government even more control over the economy will achieve anything other than making crony capitalism worse?

Oh well, at least Smith did not equate what he called “neoliberalism” with fascism, as many on the left are now doing in books and articles. That makes a lot of sense, does it not? Proponents of more liberty in economics and other areas of our lives are somehow like Hitler or Mussolini?

[This article was republished with permission from the MIses Institute.]