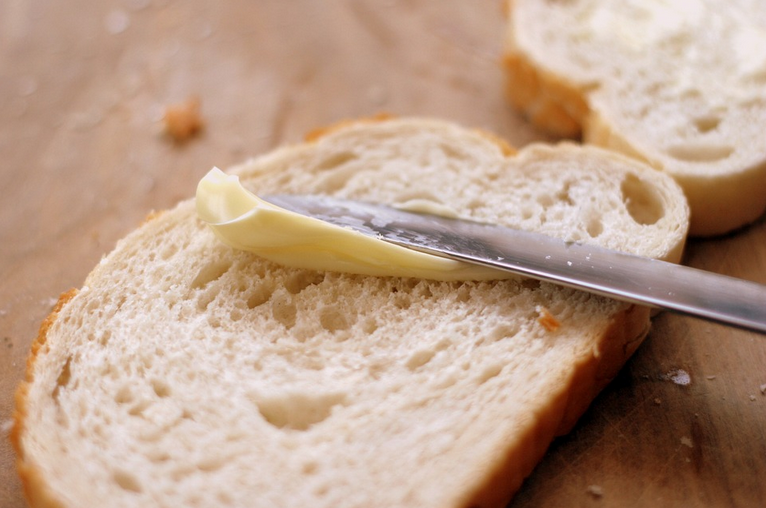 In February, a number of Irish citizens were surprised to find out that selling Kerrygold butter — a line of butter produced in Ireland — is a criminal offense in Wisconsin. Irish Central reports:

Under a 1970 law all butter sold in the state must be subjected to scrutiny by a panel, which recently ruled Kerrygold was not compliant. Their problem with Kerrygold’s products was that the cattle who produce the milk for the cheese and butter are grass fed, something the panel ruled was against state law.

Any shopkeepers who continue to stock the brand face a $1,000 fine and up to six months in jail — something that has enraged consumers.

In response, Wisconsin consumers have taken to traveling across state lines to buy Kerrygold butter in Illinois.

In March, a group of Wisconsin citizens took to the courts in the hopes of gaining the freedom to freely buy whatever butter they want:

Tired of trekking across state lines to stock up, [Jean Smith] and a handful of other Wisconsin butter aficionados filed a lawsuit this week challenging the law, saying local consumers and businesses “are more than capable of determining whether butter is sufficiently creamy, properly salted, or too crumbly.” No government help needed, they say.

While the matter of butter may seem small, there are three valuable lessons we can learn from Wisconsin’s war against foreign butter. Moreover, all these lessons apply well beyond the world of dairy products.

In cases like these, it’s routine for state officials to claim that the law has something to do with public safety. More savvy consumers, of course, immediately suspected that the law isn’t about safety at all, but is about protecting Wisconsin dairies from consumers.

They’re right to be suspicious. The Wisconsin agency that implements the effective ban on Kerrygold butter is called the Wisconsin Department of Agriculture, Trade and Consumer Protection. But, given the power of the dairy lobby in Wisconsin, one would have to be naïve in the extreme to assume that it’s a mere coincidence that Wisconsin is the only state in the Union to enact such stringent butter laws.

Even the most basic sort of critical thinking is likely to lead us to the conclusion that Wisconsin tightly controls butter imports precisely because dairy farmers have an unusually large amount of power at the state legislature.

Nor is this only true at the legislative level. Through the process of “regulatory capture” those agencies that are supposed to regulate the dairy industry end up doing the bidding of the industry’s most powerful and established firms.

The anti-competitive nature of the butter business in Wisconsin is likely working exactly how it’s supposed to. Unless the state legislature’s hand is forced by pressure from citizens, don’t expect any change.

Moreover, while even the opponents of the law are calling it a “light-hearted” issue, the reality of the butter ban is the same as any other law: those who persist in ignoring the law are likely to find themselves on the wrong end of a gun held by a government agent.

Indeed, a look at the relevant state statutes show the state is prepared to impose fines of more than $1,000 dollars for non-compliance, or six months to a year in county jail.

Ridiculously, state agents have attempted to advertise their alleged magnanimity by stating that the state’s action on the regulations “has been limited to notifying retailers of what the law says.”

Of course, this only suggests that no merchants have taken to publicly flaunting state regulations and openly selling Kerrygold butter (or other banned products). And who can blame them? Most grocers are well aware of what happens if they ignore state regulations. The result is usually fines, raids, and even imprisonment for merchants who don’t comply.

Fortunately for the residents of Wisconsin, the laws of Wisconsin on this matter only extend to the state line. Once outside the state, consumers can purchase a wider array of dairy products.

Imagine, however, if the Wisconsin ban were a matter of national policy or — worse yet — imposed by international agreements like the TPP or NAFTA.

Once nationalized or internationalized, escape from the whims of special interest groups would be nearly impossible for most people. Instead of merely traveling an hour or two over state lines, purchasing the products one prefers would become a matter of international intrigue.

This illustrates for us, yet again, that political decentralization increases the freedoms and choices of everyone who is subject to the arbitrary edicts of government. Moreover, the smaller the political unit, the better. Just as Wisconsin’s moderate size is a boon to lovers of certain types of banned food, their situation would be improved all the more should butter regulations be made at a city or county level. Every city that banned a certain type of butter to protect a local industry, a neighboring town or city would be just as likely to legalize such products.

And in many cases, of course, jurisdictions would simply give up on regulating butter since shoppers would travel to other nearby towns, thus robbing the prohibitionist jurisdiction of the sales tax revenue.

This same reality applies to every sort of good or service, whether we’re talking about police powers, tax rates, marijuana laws, or butter bans. The more decentralization there is, the more options consumers and taxpayers have.

Lesson 3: Free Trade Benefits Everyone (Except the Crony Capitalists)

Although the Wisconsin regulations on butter are not technically a tariff, they have the effect of a tariff because the burden of the regulations tend to fall disproportionately on foreign foods. Moreover, if the defenders of the status quo were honest with the public, they would just come out and admit that yes, the law exists to protect local dairy producers from outside competition.

Those who defend tariffs and other trade barriers, of course, should have no problem with this. After all, if excluding Mexican goods from US markets is a wonderful thing and “saves” American jobs, why shouldn’t the Wisconsin legislature be free to do the same for domestic Wisconsin goods? Should not Wisconsin residents want to protect their domestic industries from “unfair” competition provided by Iowa firms? After all, median wages in Iowa are lower than in Wisconsin, and it would be unfair to allow cheaply made Iowa goods to simply flood into Wisconsin markets without a “border adjustment” tax.

The truth is most people are happy to have access to goods produced outside their state or region or country. One problem the Kerrygold situation presents for protectionists is that it demonstrates in a concrete fashion how consumers are willing to circumvent the anti-trade laws when they get the chance. In turn, this consumer behavior also illustrates how local merchants and entrepreneurs are harmed by controls on trade.

Thanks to Wisconsin protectionism, every consumer that wants prohibited butter in Wisconsin is made poorer because he or she must now waste time and money driving to neighboring jurisdictions. Or, the consumer must simply do without a product he or she would like to have. In addition, many businesses — including restaurants and grocery stores — would have liked to provide consumers with what they want, but are prohibited from doing so.

“Oh, but we’re saving local jobs and local industries!” the anti-free-trade argument goes. In reality, of course, the “industry-saving” laws do nothing more than transfer wealth from one group of citizens to another. In this case, consumers, restaurateurs, and grocers suffer and are impoverished so a select number of government favorites can be spared from having to compete with outside products.

The situation is exactly the same when federal regulations and taxes have the effect of limiting access to automobiles, food products, or anything else that consumers and business owners in the US might like to buy. Unfortunately, the sheer size of the US means it’s totally impractical for most Americans to drive across the border to buy the products they want from other jurisdictions. Were the US similar to Wisconsin geographically, however, we’d see the absurdity of protectionist trade policy put on display every day as consumers traveled to neighboring jurisdictions to circumvent the absurd laws prohibiting access to goods and services that are supposedly put in place for their own good.

The issues at work in butter markets are no different in any other industry.