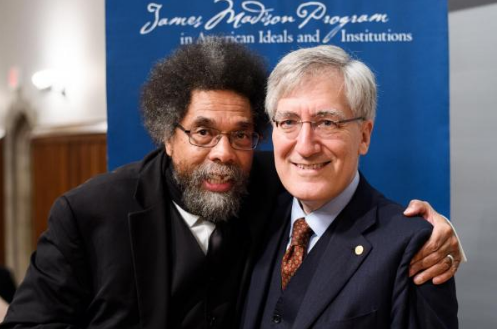 Violent protest, no-platforming and public shaming are increasingly used on university campuses and on social media to shut down debate. So it is refreshing to see that two Ivy League professors at the opposite ends of the political spectrum have issued a declaration in favour of free speech.

Robert P. George, a conservative professor of jurisprudence at Princeton, and Cornel West, a professor of African-American studies at Harvard, are disturbed at an incident which took place at Middlebury College in Vermont on March 2.

A controversial academic, Charles Murray, was invited to speak at an event organised by a conservative student group. A noisy crowd shouted him down (watch the video). Later in the evening a mob of masked protesters attacked him and a left-leaning academic friend from the College, Allison Stanger. She ended up with whiplash and a concussion.

George and West believe strongly that respectful free speech should be protected on university campuses. Their declaration is an eloquent plea for openness to opposing ideas. Scores of eminent people in public life from every background have signed the declaration, including Princeton ethicist Peter A. Singer, Harvard law professor Mary Ann Glendon, psychologist Jonathan Haidt, gay activist and journalist Jonathan Rauch, and Catholic historian George Weigel. (If you are interested in adding your name, send your name, title and affiliation to [email protected].)

Here is the text of the declaration, which is hosted by the  James Madison Program in American Ideals and Institutions, whose director is Professor George:

The pursuit of knowledge and the maintenance of a free and democratic society require the cultivation and practice of the virtues of intellectual humility, openness of mind, and, above all, love of truth. These virtues will manifest themselves and be strengthened by one’s willingness to listen attentively and respectfully to intelligent people who challenge one’s beliefs and who represent causes one disagrees with and points of view one does not share.

That’s why all of us should seek respectfully to engage with people who challenge our views. And we should oppose efforts to silence those with whom we disagree—especially on college and university campuses. As John Stuart Mill taught, a recognition of the possibility that we may be in error is a good reason to listen to and honestly consider—and not merely to tolerate grudgingly—points of view that we do not share, and even perspectives that we find shocking or scandalous. What’s more, as Mill noted, even if one happens to be right about this or that disputed matter, seriously and respectfully engaging people who disagree will deepen one’s understanding of the truth and sharpen one’s ability to defend it.

None of us is infallible. Whether you are a person of the left, the right, or the center, there are reasonable people of goodwill who do not share your fundamental convictions. This does not mean that all opinions are equally valid or that all speakers are equally worth listening to. It certainly does not mean that there is no truth to be discovered. Nor does it mean that you are necessarily wrong. But they are not necessarily wrong either. So someone who has not fallen into the idolatry of worshiping his or her own opinions and loving them above truth itself will want to listen to people who see things differently in order to learn what considerations—evidence, reasons, arguments—led them to a place different from where one happens, at least for now, to find oneself.

All of us should be willing—even eager—to engage with anyone who is prepared to do business in the currency of truth-seeking discourse by offering reasons, marshaling evidence, and making arguments. The more important the subject under discussion, the more willing we should be to listen and engage—especially if the person with whom we are in conversation will challenge our deeply held—even our most cherished and identity-forming—beliefs.

It is all-too-common these days for people to try to immunize from criticism opinions that happen to be dominant in their particular communities. Sometimes this is done by questioning the motives and thus stigmatizing those who dissent from prevailing opinions; or by disrupting their presentations; or by demanding that they be excluded from campus or, if they have already been invited, disinvited. Sometimes students and faculty members turn their backs on speakers whose opinions they don’t like or simply walk out and refuse to listen to those whose convictions offend their values. Of course, the right to peacefully protest, including on campuses, is sacrosanct. But before exercising that right, each of us should ask: Might it not be better to listen respectfully and try to learn from a speaker with whom I disagree? Might it better serve the cause of truth-seeking to engage the speaker in frank civil discussion?

Our willingness to listen to and respectfully engage those with whom we disagree (especially about matters of profound importance) contributes vitally to the maintenance of a milieu in which people feel free to speak their minds, consider unpopular positions, and explore lines of argument that may undercut established ways of thinking. Such an ethos protects us against dogmatism and groupthink, both of which are toxic to the health of academic communities and to the functioning of democracies.

Michael Cook is editor of MercatorNet. This MercatorNet article was republished under Creative Commons licensing.