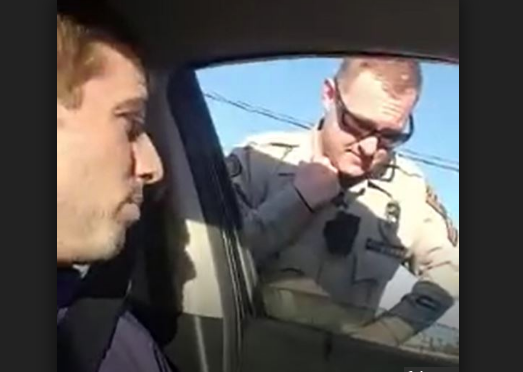 Jesse Bright was driving Uber when he was pulled over by Wilmington, N.C., police officers, who arrested the passenger he was driving.

When police asked to search Bright’s vehicle, he politely declined and informed officers he was recording the stop.

Police didn’t seem to like that. They demanded Bright stop recording, and when he refused the Daily Mail reports that he was told by Sgt. Kenneth Becker to “be careful because there is a new law. Turn it off or I’ll take you to jail.”

There was just one problem. Bright was only moonlighting as an Uber driver. He’s also a criminal defense attorney. “Do you want my bar card?” Bright asked.

The officer immediately—and comically—changed his demeanor once he realized that Bright was not about to be bluffed or bullied. But the episode is no laughing matter. The situation appeared quite tense, as evidenced by the video Bright made available to the Daily Mail.

[Editor’s Note: Officer Becker was demoted from sergeant to corporal, the Daily Mail reported on March 31.]

As you can see, Bright, surrounded by five police officers, is quite frightened.

“I’m scared right now,” he says at one point. “I’m not being a jerk; I’m recording in case anything happens.”

The confrontation brings up an important problem in 21st century America. Many police still seem to struggle with the idea that citizens have rights too, among them the right to record interactions with police in a public setting so long as one does not interfere in a police action.

A quick Google search reveals the most sensational clashes: officers in New York and California who draw guns on people recording them; the federal marshal who seizes and destroys a phone; the transit cop who assaulted a man recording him.

The examples go on, and I suspect that for every phone-related confrontation that has found its way onto the internet, there are many more that have not.

Why do some police flip out because citizens are recording their work?

It might have something to do with power. Officers want to feel like they are in control of a situation. When they are being recorded, some power is transferred to the person holding the camera.

“Photography is a form of power, and people are loath to give up power, including police officers,” Jay Stanley, a senior policy analyst at the American Civil Liberties Union (ACLU), told the Atlantic in 2015. “It’s a power struggle where the citizen is protected by the law but, because it is a power struggle, sometimes that’s not enough.”

One need not be a card-carrying member of the ACLU to recognize this is a problem.

We hear a lot about zero-tolerance policies in schools, where children are suspended for infractions of a much more trivial nature.

Is it time to begin applying these zero-tolerance policies to police officers—mature adults who should know better—who attempt to block citizens from engaging in their civil right to record police interactions? Should we not expect more from people given this kind of power over us?