Left-Wing Economics Is No Match for Alt-Right Resentment

The Democratic leadership, and its leftwing intellectual base, are feeling implausibly smug these days. They figure it this way: the Trump era is going to inspire a blowback. Trump will make a terrible mess, destabilize income security and health care access, and skew social power in favor of fat cats, and all of this will make people angry.

Then the Left will hold all the cards. They will say: told ya so. They will tap into populist impulses with their own plan for greatness, tacking further Left than Obama was willing to go. They offer up vast income guarantees, expanded economic regulation, a puffed-up welfare state, universal health care, a war on rich people like Trump, and then they rule, forever and ever, saecula saeculorum, amen.

They should rethink this. It’s probably not going to work.

It is precisely in reaction to such policies, and the complex demographics of class and race resentment they give rise to, that hard Right movements rose in the US and Europe. There will be no mass regret for turning away from social-democratic policies. On the contrary, sticking to big-government economics will perpetuate far-Right rule here and abroad. The Left has to rethink, and fast, and it means raising fundamental questions about their economic orthodoxies.

Don’t take my word for it. This analysis actually comes from a solid article in the center-Left media site Vox, “Why Left-Wing Economics Is Not the Answer to Right-Wing Populism.” Keep in mind that this was written by friends of the Left, and they are sending a serious warning: there is no evidence that tacking Left has any chance of succeeding.

“The problem is that a lot of data suggests that countries with more robust welfare states tend to have stronger far-right movements. Providing white voters with higher levels of economic security does not tamp down their anxieties about race and immigration — or, more precisely, it doesn’t do it powerfully enough. For some, it frees them to worry less about what is in their wallet and more about who may be moving into their neighborhoods or competing with them for jobs …

“The uncomfortable truth is that America’s lack of a European-style welfare state hurts a lot of white Americans. But a large number of white voters believe that social spending programs mostly benefit nonwhites. As such, they oppose them with far more fervor than any similar voting bloc in Europe.

“In this context, tacking to the Left on economics won’t give Democrats a silver bullet to use against the racial resentment powering Trump’s success. It could actually wind up giving Trump an even bigger gun. If Democrats really want to stop right-wing populists like Trump, they need a strategy that blunts the true drivers of their appeal — and that means focusing on more than economics.”

I would correct the last sentence: it means that they must fix their problem with good economics or be doomed to continued marginalization. The Vox piece points out that since World War II, most European countries have adopted some model of social democracy: generous welfare states, regulated markets, high taxation, universal education, and socialized health care. The high-water mark of the political parties that embody that vision was in the 1970s.

They have all been losing support since that time. A Rightist revolt – not in a push against big-State policies but for a more nativist application of those same policies – began in France in the late 1970s and extended to Austria in the 1980s, and the movement has gained steam since the end of the Cold War through the new millennium. It is now rocking Europe from France to the Netherlands.

A study by Simon Hix and Giacomo Benedetto tracked the support for social democracy in 18 countries from 1945-2016. They find a long secular decline at the polls. 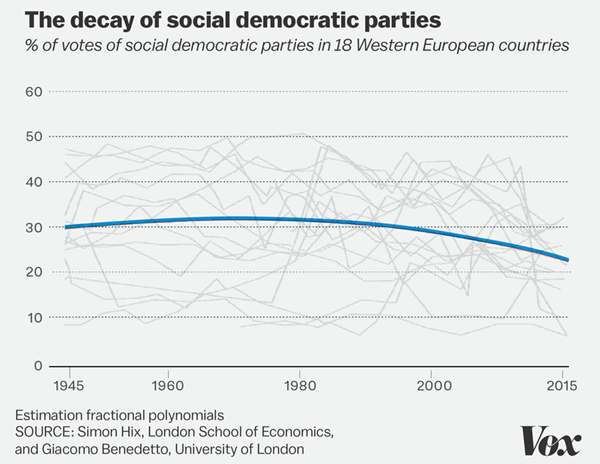 There is no reason to think this is going to reverse. The rise of the Right represents a repudiation of these policies, not in total, but in a particular form: the perception that the receivers represent a different tribe than the payers. Vox calls it “welfare chauvinism — an economic platform fairly similar to that of social democrats, but paired with an idea that immigrants should be excluded from receiving these benefits.”

Vox sums it up: “If social democrats see their future as a competition for votes with right-wing populists, then they have two choices: lose the election, or lose their progressive identity.”

The “Paradox of Social Democracy”

That’s tough advice. On a deeper level, it means coming to terms with the greatest secret in lefty circles, still spoken about in hushed terms among mostly academic types. This secret might need to come out in the open now. It is this: two high values of the Left, diversity and welfare statism, are an unstable and electorally incompatible mix. (I’ve written in greater detail on this problem here.)

The problem is that the willingness to cough up taxes for a government bureaucracy to support people with whom you sense some identity draws on a tribal instinct. You might not love it but you put up with it because you somehow identify with the people on the receiving end. There but for the grace of God go you. But the less you personally identify with those on the receiving end, the less sympathetic you are and the less willing you are to pay.

This is a fascinating observation because the ethic of the welfare state pretends to be benevolent toward marginalized groups. In practice, it only works by bolstering and feeding on identity politics. The larger the welfare state, the more the payers demand that it only benefit others like themselves.

The more diverse the society, the less likely you are to feel as if your tribe is winning in this redistribution game. You are now vulnerable to political manipulation. The first demagogue to come along and say “look at the creeps who are winning at your expense” wins the game. It’s an enormously powerful message. It taps into a deep sense of injustice that people have. Diversity becomes the proverbial straw that breaks the welfare camel’s back.

What does this breakage look like? It looks exactly like what we see around the developed world: the rise of nativism, police state authoritarianism, the boiling up of racialist feelings and movements, protectionist trade policies, centralization of power in the hands of people who have no sympathy at all toward non-majority religions, races, and language groups.

In practice, this political dynamic can get really wicked. Social welfare states, such have been built since World War II, are only politically stable in exactly the kinds of societies that are incompatible with the kind of world the Left wants and the kind of people the Left believes we should be. That’s a serious problem for them. It forces them to come to terms with a massive problem in their political worldview.

The Left Has No Answers

There seems to be no getting around this problem. Social democracy has created the very conditions that are leading to reactionary political movements that kick the left out of power. The left’s own institutions easily get captured by movements that reject egalitarian values, and use those institutions to punish the people who built them.

And as I type those words, I’m reminded that F.A. Hayek actually warned of this exact problem in his 1944 book Road to Serfdom. He predicted that social democratic policies, despite being based on a humanitarian outlook, would actually end in feeding authoritarian political movements. He warned the world back then, but only now are thinkers on the left realizing that this is true and that they have a serious problem.

And keep in mind that this is not only about the demographic paradox. The roots go much deeper to a problem that traces back at least a century: namely that left-wing movements have a huge blind spot regarding economics. Their suspicion of free-market systems runs so deep that they can’t come to terms with the obvious failure of the regulatory and welfare states they created. Or more precisely: despite all their failures, they cannot find their way toward a solution that would repudiate their foundational anti-capitalist impulses.

In short, their egalitarian and democratic ideals are at odds with their refusal to appreciate economics and the role of the market in achieving their own professed ideals.

In saying that, I’m not just trying to score ideological points. There really is a tragedy here. Since at least the 1930s, if not decades earlier, left progressives decided to abandon their 19th- century ideals to embrace a statist means of organizing society. Their hatred of capitalism trumped their love of rights and freedoms, and now they are stuck with the results: their own institutions are being captured by interests hostile to their ideals.

And at this point, there is no going back. They can’t win. They are losing control. And there is no prospect that this is going to change unless there is some dramatic ideological shift. And this shift absolutely must take place, because the cause of liberty itself is in peril. It is being squeezed out of public life in a vice of right and left.

We need all hands on deck to keep human progress on track.

What form would this shift take? There are three paths, not necessarily mutually exclusive.

As implausible as it sounds, the third path seems most viable to me. In many ways, it really is 1946 again, a time that cries out for the emboldening of a passionate, dedicated, morally strong movement to save freedom from its enemies. A genuine liberal movement must not only reverse the multifarious errors of left and right from the past but also point the way toward a peaceful and flourishing future.