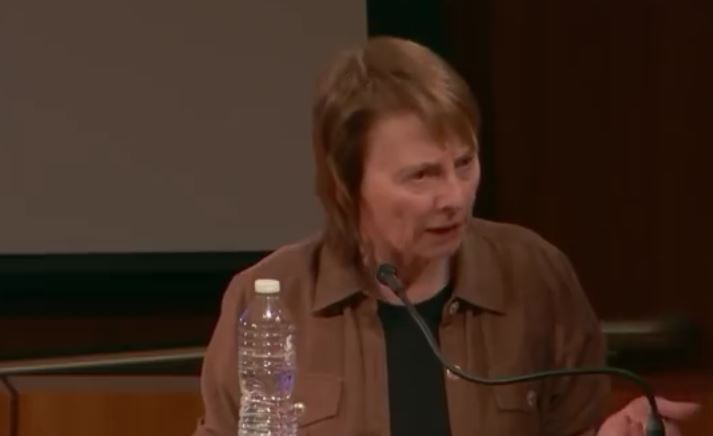 University of Toronto professor Jordan Peterson has become both a pariah and minor celebrity for famously refusing to use genderless pronouns.

He appears to have a new ally.

Feminist icon Camille Paglia was asked about the backlash Peterson has faced for his outspoken opposition to Canadian legislation (Bill C-16), which potentially would make refusal to use genderless pronouns a criminal offense.

During a recent presentation of her new book Free Women, Free Men, a member of the audience asked Paglia what she thought of Peterson’s act of civil disobedience. Paglia had not heard of Peterson, but when the man in the audience explained the situation to her, she did not hold back.

“This professor refused to use the pronouns that are being requested or demanded by the gender activists?” Paglia asked.

Paglia, who received her PhD in English literature from Yale, continued, calling efforts to control speech in this fashion “ridiculous.” She said transgender activists should contribute to language instead of removing words from the lexicon.

“Write a poem. Write a book. Look at Gloria Steinem. Her one great accomplishment is that she was a co-founder of Ms. Magazine. There was a very important contribution made by the word “Ms.” Before this, unlike the romance languages, in English you had Mrs. or miss. If you were unmarried at age 40, 50, 60, you were still called miss in a very demeaning way. Whereas in France a young girl is called mademoiselle; the minute a woman gets into her 20s she is called Madame, whether she is married or unmarried. She has dignity, she has authority… Ms. was a very important contribution to the language.”

This is quite different from what transgender activists are currently attempting, Paglia contended.

“But this political agitation to change everyday, common speech, are you kidding me? People shouldn’t be putting up with this for one second. What kind of nonsense is this? Absolute nonsense.”

“These people who are searching for their own identity, and want to impose on others. That is not my philosophy as a libertarian; that is an invasion, an intrusion into other peoples’ personal rights. The English language is owned by everyone. It was created by great artists. Shakespeare and Chaucer. Wordsworth and Joyce and so on. How dare you, you sniveling little maniac, tell us how we’re going to use pronouns. Go take a hike!”

One can see from the clip that Paglia gets rather animated while making her point. But I think the distinction she makes is an important one. One can argue that adding words like “zie” or “hir” to the English language is a contribution to language. Punishing people who don’t use them is quite the opposite.

It seems to me that two very different cultural values, both of which are good, are beginning to push against one another. Inclusivity is a positive value. Free speech also is a positive value; many would argue it is the hallmark of a civil, open, and tolerant society.

Our culture is reaching a point at which it will soon determine if the value of inclusivity is of such importance that it requires abrogating an age-old fundamental value: the right to choose one’s own words.

Many in our society seem to take freedom of speech for granted, even while support for it appears to be slipping in the U.S.

That is a dangerous combination. Advocates of free speech should consider themselves fortunate that intellectuals like Paglia and Peterson are in the vanguard of this fight.