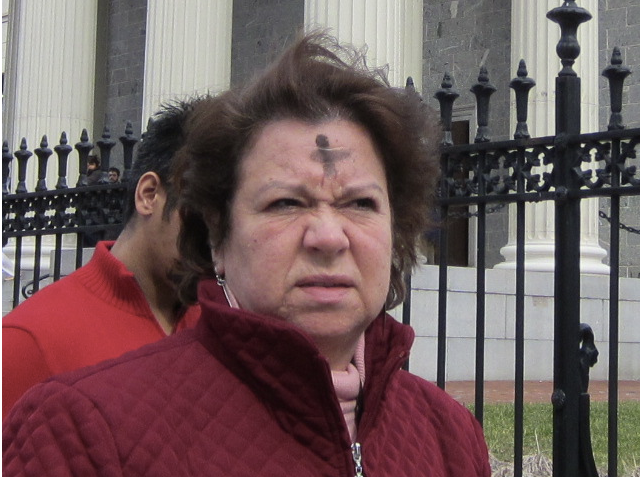 Back in college, I worked the snack bar for a few years. As it was a very small, liberal arts college, there was only one. You met a lot of people, saw your friends, and served your professors. Aside from making milk shakes, I enjoyed the work.

I’ll never forget one Wednesday when my literature professor came in to order a drink. He was a great professor, very meticulous and challenging. With that in mind, I wasn’t quite sure what to do. The man was about to go to class and had a huge dirt smudge across his forehead. After he ordered, I figured I should step on the land mine and tell him. Leaning over the counter, while gesturing across my forehead, I whispered, “Professor, you’ve got dirt on your forehead. I just thought you’d want to know since you’re going to teach class.”

His face screwed up a bit and I could see the gears going in his mind. He leaned in to meet me and said, “Devin, I know. It’s Ash Wednesday.” Frankly, I had no idea what he was talking about and figured I just doomed myself by looking like an idiot. Sheepishly, my only response was to cheerfully reply, “Oh, right. Sorry, Professor! Here’s your change and I’ll grab your drink.”

Growing up I was never introduced to the Christian tradition of Ash Wednesday. I can’t recall ever seeing a person with ashes on his forehead when I was a kid. The whole thing was foreign to me. In our increasingly de-Christianized, secular society I’m guessing a lot of people are similarly unfamiliar with the tradition.

While the day is already long, here’s a little background to save you from repeating my mistake.

Christianity in the West has its own “church calendar” that has developed organically over the last 2,000 years. The Christian new year essentially starts with Advent, a four-week time of penitential preparation before the Feast of Christmas. After Christmas, the next major period in the calendar and the most important is Lent. Lent is the 40 days of penitential abstinence in preparation for the Feast of Easter, when Christians celebrate their belief in Jesus Christ’s resurrection. This time of preparation is kicked off by Ash Wednesday.

If you’re doing the math, you’ll note that the time between Ash Wednesday and Easter is more than 40 days. That is because Sundays and major feast days aren’t included in the 40-day count. Some folks will try to do a “gotcha game” to show that the Church can’t even do math. Don’t do it.

The 40 days of penitence and abstinence is preceded by what is called “Fat Tuesday”. The reason for Fat Tuesday is it was the last day that traditional Christians could eat dairy-derived products like milk and cheese until Easter. Hence, Christians used up the fat they had left on Fat Tuesday. It most certainly was not a time to throw beads at girls (or guys) to get them to bare their chests. That sort of behavior is quite the opposite of good Christian teachings.

Things have changed a bit since more recent centuries as the Catholic Church and other denominations have, for better or worse, significantly lightened the load of abstinence expectations for the penitential. On Ash Wednesday and Good Friday (three days before Easter Sunday) Christians are expected to fast, and then on Fridays within Lent there is an expectation of abstaining from meat. Orthodox Christians of the East are still much more aggressive in their fasting.

So why do people have dirt on their foreheads? Well, it’s not actually dirt. As the name implies, ashes are smeared on the forehead in the pattern of a cross. An important part of the Christian and Judaic tradition, ashes (and sack clothes) are often a symbol of repentance from sin and wrong-doing, a turning back to God.

In a symbol of continuity, the ashes for Ash Wednesday come from the previous year’s celebration of Palm Sunday. The palms handed out at that service or Mass are saved and then burned into ashes. If you know your Christianity a bit, you’ll recall that Palm Sunday is the celebration of Christ’s entrance into Jerusalem.  Believing that Christ would be a worldly king reasserting Israel’s independence, the Jews laid out palm branches before him as a sign of reverence and hope. Hence, Palm Sunday. But the hopes for a king were quickly dashed and the Jewish establishment literally threw Christ to the Romans and demanded his crucifixion, which was completed on Good Friday, the Friday following Palm Sunday. Christians, of course, then believe that Christ rose from the dead on Easter, conquering death and sin in doing so.

Whether Christian or not, one can appreciate the beauty of Ash Wednesday. As the priest makes the sign of the cross with ashes, he generally says, “Remember that you are dust, and to dust you shall return.” The statement is a reference to the story of Adam and Eve and the Fall. Having broken God’s law in the Garden of Eden, Adam and Eve are banished from paradise:

Because you listened to your wife and ate from the tree about which I commanded you, You shall not eat from it,

Cursed is the ground because of you!

In toil you shall eat its yield
all the days of your life.

Thorns and thistles it shall bear for you,
and you shall eat the grass of the field.

By the sweat of your brow
you shall eat bread,

Until you return to the ground,
from which you were taken;

For you are dust,
and to dust you shall return.

In our days of supercharged egos and the attempted divination of the self, a little reminder that we are but dust is probably a good thing. Not meaningless dust, rather dust re-formed into man, a creature with reason, dignity, and mystery. In other words, it might be wise to have humility, recognizing our human limitations. Remember, death comes quickly and there are forces greater than ourselves.