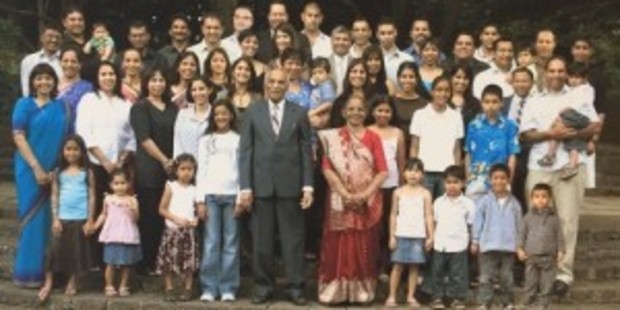 Are Jeram and Ganga Ravji the world’s longest-married couple? The Indian-born couple are certainly New Zealand’s current record holders, ready to mark 82 years of marriage in April. On Valentine’s Day they received a special accolade for the second year running from Family First NZ.

But it didn’t all begin with Valentines and roses.

Born just a month apart in May and June 1916, Jeram and Ganga were betrothed in India at the tender age of 6 and were married at 19. They had six children and the family – all based in Auckland – has grown to four generations.

Asked what was the key to a good marriage, Mrs Ravji uttered a challenging word: she said it was to learn to make sacrifices and to take the good with the bad.

Speaking to the New Zealand Herald through her daughter Bhanu Daji, Mrs Ravji said she put her long-lasting and happy marriage down to not dwelling on bad times and moving forward.

“[The advice] we would give to our children if they had difficulties with their marriage would be you have to work hard, you have to have tolerance – that’s the most important part, tolerance.”

Perhaps being products of an arranged marriage helped the Ravjis escape the hazards of the soul-mate model.

Mrs Daji noted that because of her parents’ age and where they were raised, in a poverty-stricken part of India, outward affection and romance was not part of how they showed love, however their bond was a strong one.

Not given to sentimentality, the Ravjis nevertheless told the Herald they love each other just as much now as they always have.

Mr Ravji said he could not immediately list the reasons he loved his wife, but “if we didn’t still love each other we would not still be together”.

Mrs Daji, who has herself been married for 50 years, said her parents’ advice about marriage was instilled in her and her siblings as well.

The previous longest marriage that we’re aware of in New Zealand is a Christchurch couple who we believe celebrated their 79th wedding anniversary before the husband died in 2013. The highly-acclaimed activity of recognising couples for their long marriages, which is in its seventh year in the U.S. and fourth year in Canada, has drawn media attention from around the world. Back in 2014 Harold & Edna Owings of California were also recognised for their 82 years of marriage.