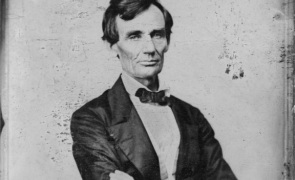 The depths of Abraham Lincoln’s misery following the death of fiancée Ann Rutledge is well known.

(Lincoln’s close friend Josh Speed provided a detailed and captivating recollection of the Lincoln-Rutledge courtship, an unlikely romance that was nothing short of Shakespearean in both beauty and tragedy.)

Lincoln was remarkably frank and open about his persistent “melancholy”, which had every appearance of severe clinical depression (in our modern parlance).

In 1841, Lincoln wrote to friend John T. Stuart that he was “the most miserable man living. If what I feel were equally distributed to the whole human family, there would not be one cheerful face on the earth. Whether I shall ever be better I can not tell; I awfully forebode I shall not. To remain as I am is impossible; I must die or be better, it appears to me.”

Another friend, Mentor Graham of New Salem, said that Lincoln, “told Me that he felt like Committing Suicide often.” To one member of the Illinois Legislature Lincoln said that “he was so overcome by mental depression he never dared to carry a penknife.”

What’s remarkable is that at least two of these conversations took place more than five years after Ann Rutledge’s death.

It was only recently, however, that I learned Lincoln wrote a poem on suicide that reads almost like a public suicide letter.

“The Suicide’s Soliloquy” that ran in The Sangamo Journal on Aug. 25, 1838. Though it was unsigned, historians believe with some confidence the essay was written by Lincoln during the height of his depression. Here is what he wrote:

Here, where the lonely hooting owl

Sends forth his midnight moans,

Or buzzards pick my bones.

No fellow-man shall learn my fate,

Or where my ashes lie;

Unless by beasts drawn round their bait,

Or by the ravens’ cry.

Yes! I’ve resolved the deed to do,

And this the place to do it:

This heart I’ll rush a dagger through,

Though I in hell should rue it!

By friends consigned to misery,

By hope deserted too?

To ease me of this power to think,

That through my bosom raves,

And wallow in its waves.

Though devils yell, and burning chains

Their frightful screams, and piercing pains,

Will help me to forget.

To take that fiery berth!

Think not with tales of hell to fright

Me, who am damn’d on earth!

Sweet steel! come forth from your sheath,

And glist’ning, speak your powers;

Rip up the organs of my breath,

And draw my blood in showers!

I strike! It quivers in that heart

Which drives me to this end;

I draw and kiss the bloody dart,

Again, we’re not absolutely certain that these were Lincoln’s words, but the timing and language strongly suggest they were. Imagine, for a moment, if this young man (he would have been just shy of 30) who had “resolved the deed to do,” had followed through on that conviction and rushed “a dagger through.”

How different would our world look today?