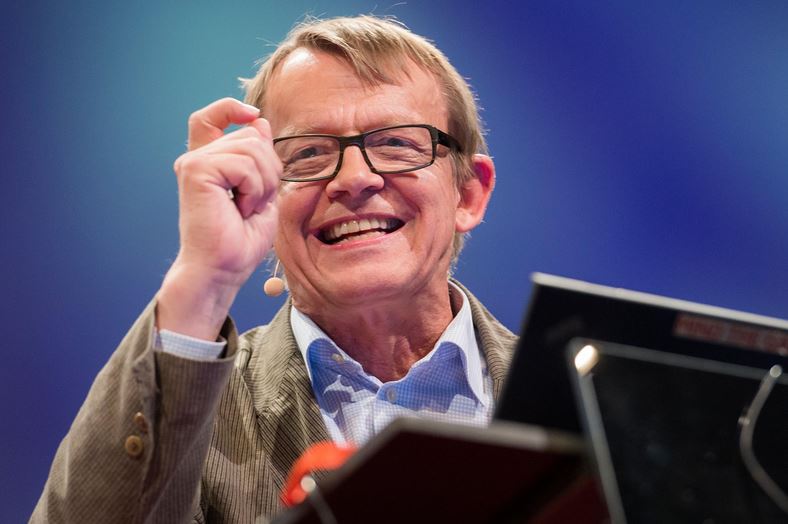 Hans Rosling, the Swedish doctor and professor who saved countless lives in the world’s poorest countries (and gave many TED talks), died yesterday of pancreatic cancer. Last December, Nature had an interesting feature with him, discussing his life’s work.

Rosling was an antidote to uninformed pessimism. As Nature noted:

Rosling’s charm appeals to those frustrated by the persistence of myths about the world. Looming large is an idea popularized by Paul Ehrlich, an entomologist at Stanford University in California, who warned in 1968 that the world was heading towards mass starvation owing to overpopulation. Melinda Gates says that after a drink or two, people often tell her that they think the Gates Foundation may be contributing to overpopulation and environmental collapse by saving children’s lives with interventions such as vaccines. She is thrilled when Rosling smoothly uses data to show how the reverse is true: as rates of child survival have increased over time, family size has shrunk. She has joined him as a speaker at several high-level events. “I’ve watched people have this ‘aha’ moment when Hans speaks,” she says. “He breaks these myths in such a gentle way. I adore him.”

As Michelle Minton noted earlier, “long term trends for nearly every indicator of human progress are positive.” A wealth of global data and statistics from Rosling confirmed this. Life expectancy is growing worldwide, and extreme poverty is falling, both in the world as a whole, and underdeveloped countries. The Cato Institute’s project HumanProgress.org, also describes the improving human condition worldwide.

In the 20th century, there was often the misguided suggestion that central planning was needed to promote human progress. Scholars such as John Fairbank questioned the ability of countries like China to feed their people without it. In retrospect, this view was ironic, since central planning turned out to be quite deadly: Between 18 million and 55 million Chinese died of starvation or hunger-related diseases during the period of China’s “Great Leap Forward,” in which China’s economy was centrally planned in earnest under its Marxist leader Mao Zedong.

Similarly, central planning caused illness for thousands of Cubans, as Hans Rosling found in his visit there. “Roughly 40,000 people” had experienced “visual blurring and severe numbness in their legs.” With the approval of Cuba’s Marxist ruler, Fidel Castro, “Rosling travelled to the heart of the outbreak, in the western province of Pinar del Río … adults stricken with the disorder all suffered from protein deficiency. The government was rationing meat, and adults had sacrificed their portion to nourish children, pregnant women and the elderly.” Reporting back to Castro, Rosling told him, “the system needs to change because this planned economy has brought this disease to people.” Castro showed more concern for the health of his people than most Marxist rulers, and used Soviet aid to expand the number of doctors. But even so, Castro’s legacy in the realm of healthcare was largely negative for his people, due to the inherent failures of central planning. Some “hospitals in” Cuba’s “capital are literally falling apart.” Sometimes, patients ”have to bring everything with them, because the hospital provides nothing. Pillows, sheets, medicine: everything.” Under Castro’s rule Cuba lost the big edge in life expectancy it once had over other Latin American countries due to communism. For example, in 1960, Chileans had a life span seven years shorter than Cubans. By 2012, they lived slightly longer.

One outlier in life-expectancy changes is the United States, where life expectancy recently fell slightly, even as government control over the healthcare sector increased due to the Affordable Care Act going into effect. Under President Obama, the U.S. fell from No. 6 in economic freedom to No. 11 on the 2016 Index of Economic Freedom. The U.S. still has a significantly higher-than-average life expectancy by world standards, but not as much higher than it used to be.