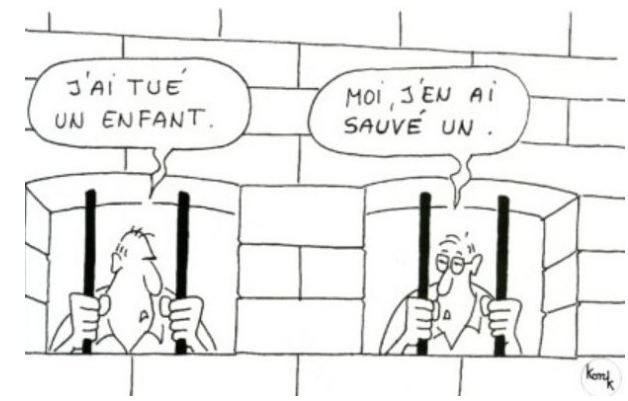 One of the most commonly misattributed quotes credits Voltaire with a beautifully-shaped sentence – which he never wrote. Anyway, the father of the French Enlightenment and of its values, allegedly proclaimed: “I disapprove of what you say, but I will defend to the death your right to say it.” (In fact, the phrase comes from the pen of Evelyn Beatrice Hall).

It seems, however, that the grandchildren of Voltaire are increasingly deviating from the founding values of their Republic and their democracy, which are partly summarized in the fake quote. Its updated version should read: “I disapprove of what you say, but I will defend to the death your right to agree with me.” Or else, shut up.

That, anyway, is the message the French parliament has sent to those who disagree with abortion and who are using the internet to inform women that it is not the only, let alone the best answer to an unwanted pregnancy. Last Thursday, by a show of hands, the National Assembly passed a law against “spreading misleading information” about abortion, a crime punishable by a maximum of two years imprisonment and a $30,000 fine.

The measure expands the existing crime of “hindrance to abortion” – aimed at stopping pro-life activists from speaking to women entering abortion clinics, or organising demonstrations near clinics and entering public hospitals — to include websites and “digital hindrance”.

In a previous article I wrote about the bagarre surrounding some French pro-life websites. Occasionally similar in appearance to official government websites providing information on abortion services, these (very successful) websites have the aim of helping women who are facing a difficult or unexpected pregnancy, encouraging them to choose life for their baby.

No harm is being done to anyone in the latter case, especially since one is perfectly free to silence unwelcome information with a click on a browser window. No French pro-lifer pops up from under your laptop while you’re surfing the internet to “hinder” your trip to an abortion clinic.

Yes, sometimes it is rather difficult to find lawful support for suppressing free speech in France, since the famous liberté still stands in the Republic’s motto. In that case, one has to find an oblique way of obtaining the same result.

Thus, the pro-life websites are to be shut down not because their contents differ from the official line on abortion, but because they look too similar to official pro-choice websites, and therefore – it is maintained – mislead women and coerce them to continue their pregnancy.

The Minister for Women’s Rights, Laurence Rossignol, stated that

“the adversaries of birth control are advancing in disguise, hidden behind [web-]platforms which mimic institutional websites or seemingly-official hotlines. Pro-life militants, [though], will remain free to express their hostility against abortion. Provided that they state sincerely who they are, what they do and what they want.”

What will that mean in practice, though? According to this report, the wording of the law is not restrictive:

“As it stands, it can be used to prosecute those with any “information” that presents abortion in an unfavorable light and pushes women not to choose abortion. The law does not define who has authority to judge whether information is officially “misleading.” That will be up to judges in principle and specifically to health and government officials.”

Who is misleading whom in this debate is at least open to question. The government abortion website talks, for example, about surgical abortion as an “aspiration of the egg” and asserts that “abortion is not the removing of a life,” as Rossignol said in the National Assembly. The official site says that “all serious studies” show there are no long-term adverse psychlogical effects of abortion, whereas the pro-life IVG.NET site adduces much credible evidence to the contrary. This could, under the law, lead to complaints and prosecution.

Alliance Vita, a pro-life network, denounces the law as a danger to “freedom of expression and of information. […] Not only the objectivity of information is threatened, but also any prevention of the pressures encouraging abortion, which are currently denied and ignored.”

IVG.NET for its part is not about to back down. Its director M. Phillippe declares they will change neither “the content of our websites or the help we provide to women on the telephone, including the invitation to reflect.”

He points out that the attempt to gag pro-life websites extends to the mainstream media: in the eight years they have been under attack they have been given only four minutes to put their point of view – on the TV channel Public Senate. He adds:

“We do not, of course, exercise “moral and psychological pressures” or “threats or acts of intimidation”. But the purpose of this law (and its consequence) will be to allow Family Planning to harass us judicially without our being able to reciprocate because of their de facto impunity.”

The Republican (center right) party, which voted against it, agrees. They intend to submit the text to the Constitutional Council in the hope of having it declared contrary to the French Constitution.

The blow to the French liberté is serious. In fact, the larger scope of the “hindrance of abortion” crime is likely to limit dramatically the efforts of those whose only aim is to help women to choose life.

To quote Voltaire again, “We’re pro-choice as long as you choose what we want.” (We can make one more fake Voltaire quote, can’t we?).