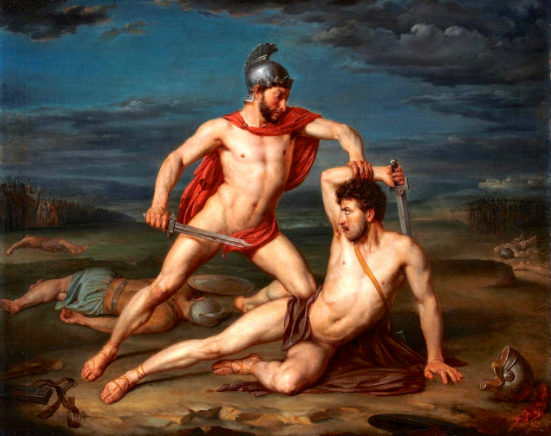 No, what I want is not the jaded and faded pseudo-paganism of aging hippy geeks but the young and virile paganism of the happy Greeks. Yes, the Greeks were happy. There’s more joy, in the sense of catharsis, in a Greek tragedy than there is in a modern cynical comedy.

Furthermore, what I want is not the trying and testy nonsense of modern rationalism but the tried and tested sense of Greek Reason. Give me the dawn of the Greek golden age in philosophy and not the setting of reason’s sun in the gloom, doom and nihilism of postmodernism and deconstructionism. Give me Socrates with his eyes wide open with wonder and not Schopenhauer with his eyes closed in upon himself, reducing reality to the self’s (mis)perception of the self, the primal dream of radical pessimism leading to the primal scream of the self’s despair. Give me the solid common sense of Plato’s cave and not the uncommon nonsense of the Darwinian caveman. Give me the Nicomachean Ethics of Aristotle and not the Nietzschean excesses of the Nazis or the existentialists.

Give me the epic morality of Homer and his heroic war on hubris! Give me giants of Homeric stature like Achilles (depicted in the image above), whose hubris is shown to be a greater weakness than his heel. Give me the morality of the Iliad, with its warning about the destructiveness of anger, that bitter fruit of pride which destroys the peace of the soul and sows discord in the soil of society. Give me the pathos due to Hektor and his wife and child, the innocent victims of the sins of others. Give me the epic journey of Odysseus and the wisdom of humility he learns through suffering. Give me the epic nature of his quest, the purpose of which is to get Home, that mystical place that all true hearts desire, the heaven-haven of the reward.

Give me the sophia of Sophocles, whose glorious tragedy on the life of Oedipus is nothing less than a Divine Comedy. Give me the timeless political lessons of Antigone, which prefigures Orwell in its depictions of the cruelty of political secularism. Give me Oedipus Rex, which is as gut-wrenching as the Book of Job in its depiction of the apparent senselessness of suffering and the impotence of Man in the face of its apparently merciless power. Oh, and please let’s not pass over the sheer beauty of Oedipus at Colonus in which Oedipus emerges, transfigured, as a paragon of virtue, purified by the very sufferings he had endured, cured by catastrophes he had earlier cursed.

O, for such paganism! O, for its purifying winds to scatter the dust and detritus of our decaying culture of death!