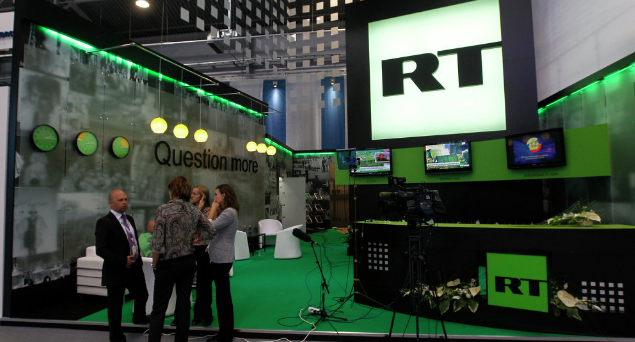 A 14-page report from the Office of the Director of National Intelligence (ODNI) has concluded that during last year’s election campaign Russia tried “to undermine public faith in the US democratic process, denigrate Secretary Clinton, and harm her electability and potential presidency” and promote the candidacy of Donald Trump.

The report is a non-classified version of a “highly classified assessment” so most of the supporting evidence about hacking, trolling and cyber-espionage has been omitted. We have to take the ODNI’s assertions about them on faith, but they’re probably true. Vladimir Putin and his government have a different view of the world order and want to promote Russian interests. Putin is a former spook and espionage and hacking is what spooks do for a living.

But what is odd, not to say bizarre, about the report is the attention it pays to RT, the Russian-funded English-language YouTube channel. Seven of its 14 pages are devoted to constructing a sinister profile. To me, it smelled like the strategy of a high school student writing a research paper – race through the areas you don’t know and stuff one issue with as many facts as possible.

Criticism by the CIA, the FBI and the National Security Agency must be the best thing that ever happened to RT. It already has more subscribers than Al-Jazeera in YouTube; after this Christmas gift of unexpected publicity, it will probably soar.

RT’s programming is livelier than the dull-as-dishwater videos from Deutsche Welle, which is funded by the German government. It promotes Russian interests relentlessly and gleefully snapshots the darker side of Western society. “5 injured after wild brawl in America’s largest jail” or “UK fat cats already made more money in 3 days than Britons will make all year” are typical stories. And of course, RT journalists have been going wild over allegations of Russian interference in the US election – ridiculing it, denying it, explaining it away, and chortling at the slightest mistake in US news coverage.

The intelligence report complains that RT “has substantially expanded its repertoire of programming that highlights criticism of alleged US shortcomings in democracy and civil liberties”.

But, seriously, how could you expect anything else from a Russian-funded YouTube channel?

Besides, hasn’t the intelligence community ever read major American publications for which “criticism of alleged US shortcomings in democracy and civil liberties” is a daily staple. Of all websites on the internet, TruthOut is ranked about 21,000 in hits. Its headlines range from “Capitalism Is the Problem” to “Children Starve as US-Backed Coalition Violates Human Rights in Yemen” to “Donald Trump and His Cabinet of Criminals”. Alternet, which is even more popular, ranked about 4,000, contains stories like “Media Fell for Nazi-Manufactured ‘White Genocide’ Scandal” or “While Rohingya Muslims Are Ethnically Cleansed, Obama Quietly Lifts Sanctions on Burma”.

And if we are talking about “undermin[ing] public faith in the US democratic process”, progressive websites regularly feature articles which sound like parodies of RT America-bashing. “Missouri dooms countless children to the school-to-prison pipeline” or “The mysterious private police force that’s killing people in the nation’s capital” are headlines in ThinkProgress, another leading website. In fact, as far as most of these widely-read websites are concerned, Trump’s election proves that the US democratic process is already broken.

Perhaps the CIA, the FBI and the NSA should be reminded that democracies flourish with free flow of information. Americans like to have alternative sources of information other than the New York Times, the Washington Post and CNN – even if some of them are screwball. It is by sifting contrasting political opinions that most people end up forming their views.

In any case, it is an iron law of sociological research that you cannot draw useful conclusions without making comparisons. For instance, Japanese might think that Osaka is a crime-ridden city – until they visit Chicago. So complaints about RT’s jaundiced view of America need to be set beside the picture of Russian political and social life projected by Radio Free Europe/Radio Liberty. (Disclosure: MercatorNet has republished a few of RFE/RL’s articles.)

RFE/RL is 100% funded by the US Congress. It covers events in an arc of countries stretching from Central Asia to Iran to Russia and its former satellites.

And, as you might expect, its coverage of Russia, while accurate and well-documented, tends to focus on the low standard of living, corruption and repression. “Russians Try To Make Ends Meet In Bleak Communal Apartment” underscores the misery of public housing in St Petersburg, “Vladimir Putin’s home town”. Or “Russian Censors’ Fight Against Teen Suicide Looks Ham-Fisted To Some”. RFE/RL consistently champions LGBT rights and criticizes the Kremlin for aspiring “to be the leader of those nations that continue to repress sexual minorities”.

In other words, RFE/RL promotes American interests and culture, much as RT does, although on a smaller scale. And it probably annoys Russians just as much as RT annoys Americans.

RT should be left alone. If you’re an American who gets all your news from RT (which is impossible to imagine), the worst that will happen to you is not that you’ll like Vladimir Putin, but that you’ll end up working on the Bernie Sanders in 2020 campaign.