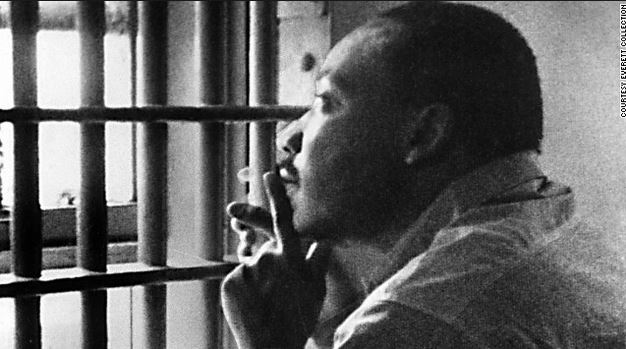 It’s typical of the progressive cast of our culture to focus on the forward-looking at the expense of the traditional—or if you prefer, to miss the traditional elements that lie at the heart of a genuinely progressive movement.  So it is that in celebrating the accomplishments of Martin Luther King, Jr., his connection to the thread of the Western moral and philosophical tradition is often neglected.  One person who has not fallen into this trap is Justin Dyer, a professor of political science at the University of Missouri who has penned an illuminating article on the philosophical heritage of King’s Letter from Birmingham Jail.

Reading the article I was reminded of the first time I read King’s letter, in Catholic college as an excerpt in The Norton Reader, and of the literary and philosophical associations that flooded into my mind then.

Letter from Birmingham Jail was written after King had been arrested for protesting without a permit in Birmingham, Alabama, and is an apologia for his non-violent resistance to segregation ordinances.  King seems to cast himself in the role of a Christian apostle writing to the churches under his care; in the letter’s closing he declares to his fellow clergymen, “I hope this letter finds you strong in the faith,” evoking the language of St. Paul’s epistles.  King’s letter is filled with classical rhetorical devices, such as ethos (establishment of credibility) pathos (appeal to the emotions) and logos (appeal to reason).

It is in exercising logos that King’s indebtedness to the Western philosophical heritage comes to the fore.  King cites both St. Augustine and St. Thomas Aquinas in the matter of distinguishing just and unjust law, and on the necessary harmony between human law on the one hand and eternal and natural law on the other.  He also evokes the more recent philosophical tradition of personalism: the belief that ultimate reality is personal, which he absorbed during his studies in systematic theology at Boston University and which is also found in the thought of, among others, Pope John Paul II.  King applies this point of view to the situation of his people when he states that “segregation distorts the soul and damages the personality.” King’s references to the breadth of the Western tradition—from the ancient Israelites to Socrates to the American Founders—are many and varied.

Justin Dyer argues that we de-emphasize the natural law basis of King’s thought to his, and our, detriment.  Says Dyer, “the very core of his thought [was] rooted in a worldview repugnant to many of those who now claim his legacy.”

On this Martin Luther King Jr. Day,  we would do well to reflect not just on the life of the civil rights icon, but on the ideas that shaped and inspired him.