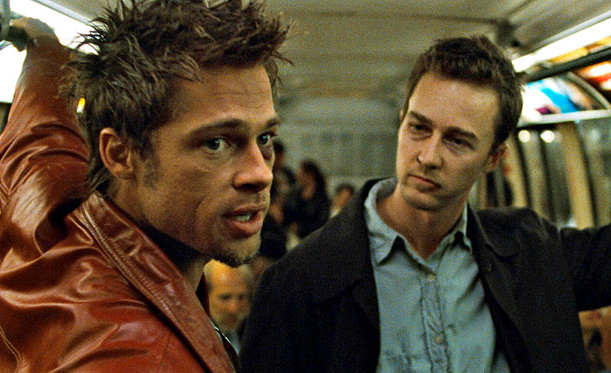 I’ve probably seen Fight Club 40 times. A friend whom I lived with in college had a sort of obsession with the film.

Yet I somehow failed to make the connection between Fight Club and the term “snowflake.” Here it is:

“You are not special. You’re not a beautiful and unique snowflake. You’re the same decaying organic matter as everything else. We’re all part of the same compost heap. We’re all singing, all dancing crap of the world.”

It’s a beautiful line that comes directly from Chuck Palahniuk’s book, on which David Fincher’s 1997 film is based. Okay, maybe it’s not beautiful, but it’s great.

The term “snowflake”— used derisively to describe coddled, sensitive young people—is ubiquitous today. But I missed the connection between the word and the film until Palahniuk took credit for popularizing the term in a recent interview.

“It does come from Fight Club,” Palahniuk told the Evening Standard. “There is a line, ‘You are not special. You are not a beautiful and unique snowflake.'”

If you are unfamiliar with the term “snowflake” used in the sense, this is how the word is described by Urban Dictionary:

Snowflake: An overly sensitive person, incapable of dealing with any opinions that differ from their own. These people can often be seen congregating in “safe zones” on college campuses.

Those social justice warriors are just a bunch of snowflakes.

Many people, particularly overly sensitive people incapable of dealing with any opinions that differ from their own, despise the term.

Matt Miller of Esquire, for example, says the term was coopted by the alt-right, an uncreative group strikingly similar to “Fight Club‘s patriarchal, proto-fascist Project Mayhem.” Miller bristled at Palahniuk’s suggestion that these allegedly easily-offended young people represent a sort of “new Victorianism.”

If by “offended,” he means “standing up for the basic human rights that this country was founded on,” then yes, I suppose he’s right. But then again, his book—later turned into a big-budget movie starring Brad Pitt that empowered impotent men through petty anarchism—portrays similarly sad and pathetic men who have lost all of their power and feel they must destroy society to regain their standing… Kinda like the members of the alt-right themselves.

Miller, in my opinion, overlooks some salient examples of very real behavioral trends (further reading: here, here, and here). And it’s certainly not alt-righters alone who have observed the phenomena.

NYU professor Jonathan Haidt, for example, a prominent liberal, has written extensively about the easily-offended sensibilities of young people (even if he has perhaps not used the term “snowflake”). Haidt, a behavioral psychologist, says people born after 1980 are far more likely to be in a state of moral dependency, a behavioral pattern that involves young people using authority—a department, a figure, etc.—to seek redress for perceived slights, or “microaggressions.”

One wonders if attempts to link the word (slur?) “snowflake” to the fringe alt-right is not itself an attempt to strike a disagreeable word from acceptable vocabulary. Readers can draw their own conclusions on that matter. I’ll close with an observation from Palahniuk:

“The modern Left is always reacting to things,” he told the Evening Standard. “Once they get their show on the road culturally they will stop being so offended.”