‘La La Land’: A Glorious Movie that Succumbs to Pessimism 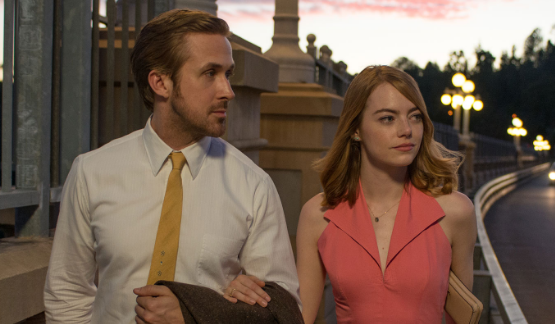 No movie comes more highly recommended than La La Land, which won more Golden Globe Awards (seven) than any other movie in history and which is now poised to sweep the Oscars (fourteen nominations). Does La La Land, as its admirers assert, really evoke the Hollywood of old? Is it a classic musical that spurns the irony and cynicism of modern Hollywood?
What La La Land does it does magnificently. There are times when you are simply swept away by its magic. Like the best musicals of old, it effortlessly lifts the viewer into another realm. It contains scenes that are every bit as sublime as Judy Garland’s Dorothy singing “Over the Rainbow” in The Wizard of Oz, or Bogart’s Rick Blaine listening to “As Time Goes By” in Casablanca.
It is a stunning achievement. And yet there is something very wrong.
The movie is about the achievement of dreams. For Sebastian (Ryan Gosling), it is to be a successful jazz musician without compromising his art for the sake of popularity. For Mia (Emma Stone) it is to be an actress.
But we, the viewers, know what the real dream is. In fact, we wait the whole movie long to see the culmination of their love for each other. This is where the story wants to go.
But a fateful decision is made by the two characters (and ultimately, their author) when, in order to achieve their individual dreams, they are faced with the decision to give up the bigger dream, the real dream, and they end up succumbing to the temptation that kills all dreams in modern movies.
Just as the most magical thing is about to happen, it is stolen from them–and from us.
The ending of the movie will tear your heart out. Don’t let anyone tell you it is bittersweet. It is simply bitter. And it is more bitter in light of the possibility that is so brilliantly held out to the viewer. We are led to the gates of heaven, only to have them closed in our face.
Where does modern Hollywood get the idea that a sad ending to a happy story is more profound than a happy ending to a happy story?
La La Land is not a bad movie: It is a great movie. And this is precisely what makes the ending so utterly disastrous. Corruptio optimi pessima: “The corruption of the best is the worst.”
What made classic Hollywood great was its unapologetic assumption that ideals were real and could be achieved. It evoked this truth without irony, and it didn’t buy into the lie that there was something cheap about a happy ending. Wittingly or unwittingly it acknowledged the great Christian belief that the world itself has a happy ending.
La La Land. See it and weep–not because of how it ends, but for how it could have ended.